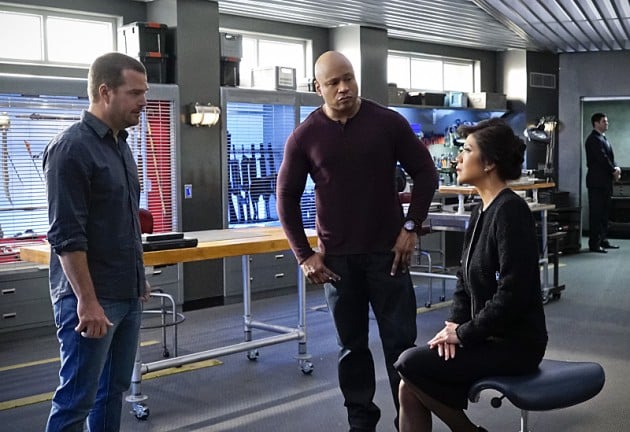 This week’s episode of NCIS: Los Angeles was a reminder not of creative writing necessarily, but of the influence of real-world terrorism on writing for shows like this. We find our team on high-alert after an assassination attempt is made on the U.S. Ambassador of Tunisia, played by The Talk‘s Julie Chen. As the team discusses the two fallen members of her security team and the ongoing investigation, the team brings in real-world events, commenting on the fact that six other U.S. ambassadors have already died in terrorist-related attacks. Before we dive into this fictional case, I hope we can take this opportunity to recognize that these facts are real, they are scary, and it’s important to recognize the significance of what happens in the world.

What is also most unfortunately real is the bureaucracy and thin political line that different nations have to walk on. Because the two fallen servicemen’s bodies are still in a country of high tension where terrorists are still at large, they cannot be recovered right away for fear of political and other forms of retaliation. Besides the personal pain, felt most especially by Sam as he served with one of the victims, of not being able to bring the victims home to be properly buried, there is also the complication of not being able to analyze the crime scene. Thus Sam and Callen are snuck into Tunisia under the radar to analyze the crime scene so that a fancy 3D model can be reconstructed back in Los Angeles. On a sidenote, technology is cool!

While Callen and Sam are on their mission, Kensi and Deeks delve into the people in the victims’ lives to see if there were any warning signs of a potential attack. What they find is one of the victim’s supervisors Commander Beck cagey, yet adamant that the killers be, well, not exactly brought to justice. At first, it seems that the terrorists have followed the ambassador to Los Angeles to finish her off, until hacking into the terrorists’ surveillance reveals they were actually surveying Sam’s deceased colleague, Commander Harris, not the ambassador, and only to kidnap, not kill him. Turns out Beck was overseeing a dangerous covert operation with the CIA and Harris, codename Dogleg, that had the potential to go very south, and the terrorists are now after Beck. The team manages to save a kidnapped Beck from the terrorists and the deceased are laid to rest.

Because the real world is crazy scary and the team is almost always on high alert, it’s nice to sneak in some humor and friendship into the daily routine, something our team takes advantage of. Deeks and Kensi are, of course, masters of the rom-com banter, as evidenced by Deeks’ insistence on using the 3D printer to build a Hetty bobblehead, while educating Kensi on the beauty of classic animation in front of a very confused FBI agent. Here again we also see subtle signs that their romance is still going strong (“You have my back?” “Always”).

You can also see the humor in the little moments between other members of the team. The tension in the air seems to have gotten to Eric since he’s having trouble, though humorously so, keeping up with the developments. Another real world consequence of terrorist attacks is the tension that these agents feel every day, so the close-knit bond between them, obvious even to an outside FBI agent (“I’m not sure how, but this works”) is important, especially since we are also reminded in this episode that the team still doesn’t know who their recent mole was working for, which means they are all still compromised. I’m hoping this point will be more developed as we enter the backend of the season.

What did you think of the team’s strength this week?