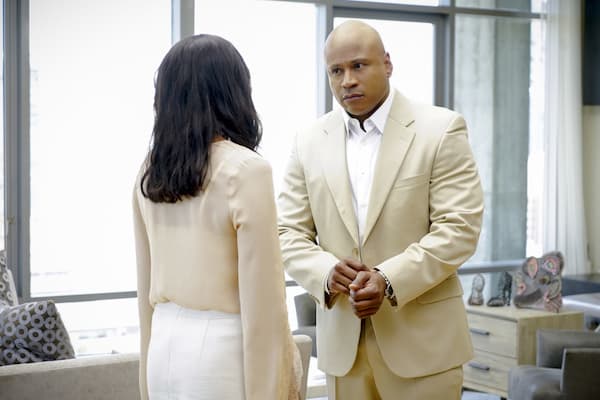 For those who don’t speak Spanish, the title of this week’s NCIS: Los Angeles reads “The Clown Died.” The title has a double meaning for the second episode of the season. The first has to do with the lead suspect in the latest case, while the second could be considered a metaphor for a funny obsession of Anna’s that Callen discovers. Once again, for a cast and environment that fans love, there is a huge gaping hole on the canvas. NCIS: Los Angeles‘s leader, small but deadly Henrietta Lange, is missing. When a team member leaves, especially in this environment, it isn’t unusual. The way that it happened is just too uncomfortable to last, for the audience and for NCIS.

We don’t have Hetty, but we have Anna. She may be on loan from ATF, but she would make a great permanent addition to NCIS. She has a great relationship with the team, especially Callen, who is surprised to learn that his lady love is an accomplished gamer. Call me crazy, but how fun would it be for NCIS to have a Halo 5 competition at the end of a case, and it’s the one skill Callen can not get the hang of? We’ll take what we can get, and it’s great that Anna is able to lend a hand for this counterfeiting case, which is brought to NCIS by Sam’s old friend Agent DeChamps. She asks for the team’s help after she infiltrates a Peruvian counterfeiting ring, and they can’t flip the brains of the operation, the prodigal daughter Lucilla Marka. She serves as the financier for the biggest counterfeiting family in the world. Lucilla is polite-way too polite for someone brought to a mysterious location by a foreign agent. She does know how to be evasive. She knows how to weave around the truth by speaking the truth about other, non-sequential things. She does so very well, and for a long time, but she talks too much. The details she gives don’t match with her history, because she isn’t the prodigal daughter, but her childhood friend. It was a pretty great plan actually, to build the legend of the untouchable daughter as a smokescreen. Joke’s on the imposter who won’t be bailed out by her supposed saviors.

Something that was really striking that I’d like to see more of is Sam’s other skill-set. DesChamps brings Sam in undercover as her financier, and boy does he pull off the part! Sam has taken on many personas, but playing the fidgety money man who talks like a computer may be one of his most memorable performances yet. Hetty would have gotten a kick out of that. Continuing the saga of ‘Where in the World is Hetty’, we go back to Ho Chi Minh City. Hetty found what she was looking for, her old friend Harris King, who was captured by the Viet Cong while she escaped. That was a lifetime ago, but how do you forgive someone for leaving you behind to die? Depending on what exactly transpired, Hetty may have to contend with that very situation.

This felt more like the NCIS: Los Angeles we know and love, but is it the sustainable long-term without Hetty?

NCIS: Los Angeles only works without their leader with the help of a friend who adds some fun to the team dynamic.