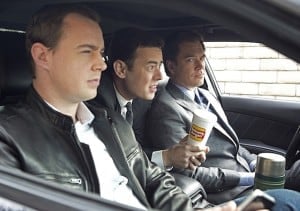 Ok, I’m just going to go ahead and say it… Colin Hanks was a creepy piece of work onÂ NCISÂ “Double Blind.” I know he’s a brilliant actor in his own right, but seriously, he started the episode like he was channeling his Dad’s (Tom Hanks) loveable Forest Gump, yet by the end of the episode showed himself to be a conniving, manipulative [insert bad word here].

That said, I really enjoyed tonight’s episode. Â The storyline was strong and there were just enough twists and turns to lead us on an intense ride. While the promos for the episode may have strongly indicated that Gibbs was Parsons’ (Hanks) target all along, there was enough detail in the plot to lead us firstly towards Ziva, then Vance, before officially landing on Gibbs.

The case the NCIS team were investigating was somewhat interesting, but far less so than the events unfolding through Parsons’ investigation. The link though, between their victim being watched by a ‘Big Brother’ type organisation and the surveillance that Gibbs and his team were being subjected to, was hard to miss.

I felt this weeks episode was a lot more rounded than last week’sÂ NCIS. Like many of you, I felt let down by those big expensive explosions that seemed to have little physical impact on the characters. Not that I wished them harm, it just seemed rather anti-climatic, given the promos. I also had rather high hopes of some Tony and Ziva interaction last week, but that didn’t eventuate. However, that was certainly dealt with in “Double Blind”. I liked the way that Tony immediately jumped to Ziva’s defence when Parsons was interrogating her and yet didn’t put up with her excuses about “being alone” in Israel. The “my hebrew must be rusty” line had me saying “Awwww” out loud. 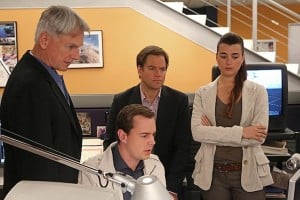 The thing I loved most about last night’sÂ NCISÂ  was the continuity. It’s an element this show has always done well through bringing back past characters and addressing the ongoing effects of major life events. Â The need of the team to justify themselves to Parsons was a clever way to round out the Ziva/Mossad storyline as well as introduce the ongoing investigation into Gibbs.

Those of us old enough to remember would know thatÂ NCISÂ was a spin-off from the TV show JAG, so be sure to watch next week when the story comes full circle with the re-introduction of John M Jackson from the original series. Jackson plays former Admiral AJ Chegwidden who was the head of the Judge Advocate General and will be brought back in his lawyer capacity to help defend Gibbs. While we may not see a physically explosive episode such as in last season’s finale, I personally can’t wait to see how the final episode of season 10 unfolds. How about you?