Home
Review
Netflix’s ‘Castlevania’ Finally Solves the “Video Game Problem.”Â  Now Give Us the Rest of It!

Video games have always had a problem when it comes to stretching their legs into other mediums.Â  Although they’ve long since mastered their own entertainment niche — long-form, interactive narratives — they’ve always failed to successfully transition to other mediums, especially into movies.

To date, the most successful video game adaptation for the big screen is Mortal Kombat.Â  For all its numerous flaws, it realized that doing justice to double digits worth of combatants — each with their own, needlessly complicated back story — wasn’t going to work in the film’s 90 minute timeframe.Â  Instead, it took the general concept of a supernatural fighting tournament, focused on a few central characters and kept the action moving to a climactic punch-out.Â  And for those few things, it maintains a cult following to this day despite, if we’re being brutally honest here, being nearly unwatchable trash when taken on its own merits. 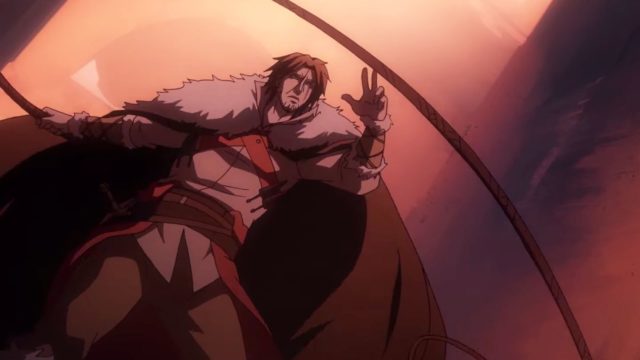 Since then, there has been a mixed bag of successors, mostly falling in the “not completely unwatchably terrible” range: the Resident Evils and Tomb Raiders of the world.Â  Sure, they’ve been popular and profitable, but nobody’s ever been fully satisfied with them as either entertainment nor art.Â  Not a single one of them has figured out how to condense a 20, 30 or even 40 hour experience of playing a video game into the hour or two that a movie allows for.

The answer, as it turns out, is simple.Â  Don’t.Â  Even the often barebones plots of video games can’t be cut that deep into their narrative marrow and still make any semblance of sense.Â  They aren’t meant to be movies, no matter how hard the industry tries to become some kind of Â “New Hollywood.”

That’s what made Castlevania such a treat to sit down to watch this weekend.Â  Even when adapting a franchise this loosely, even when there’s this little plot to work with, its showrunners had the foresight to realize that it was foolhardy to try (and inevitably fail) the same inherently flawed premise for adapting its source material as countless studios before them.

Castlevania is foremost a television series, broken up into one hour installments that allows its blood-soaked story and expansive cast of characters a chance to develop the way it needed to in order to be successful.Â  From its gripping antagonist to its eclectic band of intrepid heroes — including an excommunicated vampire slayer, a persecuted witch and the half-vampire son of Dracula — everybody is allowed the breadth that their character requires, developing at an organic pace that would be lost if it was cut down to just an hour or two.

The series opens with an inquisitive young woman — a scientist who wants nothing more than to help the zealotous people of fifteenth century Wallachia — beseeching Dracula to help her improve the lives of people the world over.Â  Although hesitant, he agrees.Â  He marries her and takes her advice to “walk the world as a man does.”

When he returns home, however, he discovers that the Church burned her at the stake as a witch.Â  In his rage and despair, he calls down the armies of Hell on the people who killed the only woman he had ever loved and doomed him to an eternity of solitude. 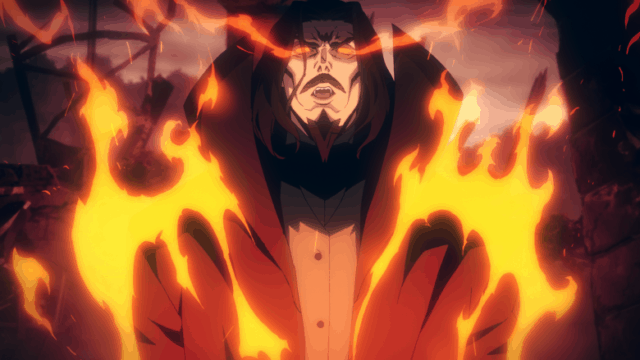 As demons savage the countryside, killing and abducting townspeople by night, Trevor Belmont travels through Wallachia in search of some drink and a dry spot to sleep.Â  He is the last son in an ancient line of vampire hunters: excommunicated from the church for the crime of saving people from the terrors lurking in the night.Â  Joining him on his quest to slay Dracula is Sypha Belnades, a fiery young mage looking to restore a mystical savior rumored to slumber beneath the city streets.Â  Her messiah is Alucard, Dracula’s half-vampire son, who was grievously injured by his father when trying to stop his genocidal plans against mankind.

The characters, such as they’re presented, are fleshed out over their introductory narrative arc.Â  The Church is presented accurately for the time period: a corrupt institution looking to command the masses through fear and persecution.Â  Dracula is both sympathetic and terrifying and the real villain of the series, the cruel Bishop who set everything in motion by killing Dracula’s wife. 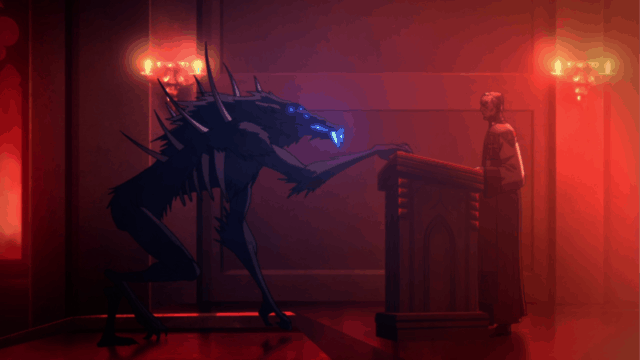 I’ve always maintained that animation was the ideal medium for horror.Â  The ability for drawings to twist and contort beyond anything possible in-camera makes it the ideal way to portray the horrific.Â  And yet, for whatever reason, it is never used to that unsettling end.Â  Castlevania, however, makes this its central aesthetic: an R-rated cartoon populated with impossibly portioned demons and cascading with blood.Â  It’s perfect.

The only fault I can point out is that it’s first season, such as it is, is maddeningly short.Â  In all, it’s just four episodes long: one for Dracula and another one introducing each of the protagonists.Â  We watch Dracula loose his demonic hoards upon the Earth, watch them ravage the countryside and then everything stops as soon as our heroes set their sights at stopping his eternal reign of terror.

When we eventually get the missing second half of the first season, it will be the first legitimately must-see video game adaptation out there.Â  Until then, it’s just a fantastic proof-of-concept for the rest of the franchise.