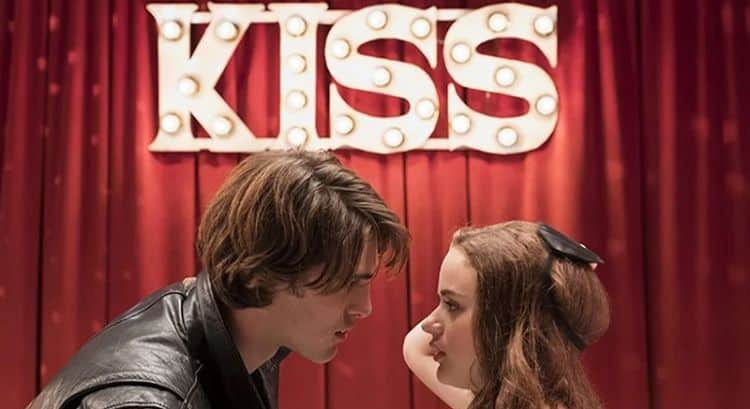 Who else would be up for Ninja Vikings vs. Boob Police over this? If you said okay then it’s likely that you’ve seen too many teen movies that people are bound and determined to condemn at the drop of a hat but will watch anyway. The whole issue with teen movies is that quite often they’re not exactly how our teenage years go since there’s a lot of stuff that gets omitted, some stuff that gets added, and a lot of hullabaloo that makes people look at each other and wonder just what we might have missed out on. Of course, the answer to that isn’t much since there might be a few high schools out there that would say that of course, they had this type of experience, but there aren’t a lot. The Kissing Booth is not the typical high school experience since to be fair it takes on the perspective of those that are actually popular and the world as they see it more or less, which is something that people are willing to pay to see but is also enough to warrant an eye roll or two since there are moments when the cheese really goes over the top. Seeing Molly Ringwald, one of the queens of the 80s, doesn’t do much to alleviate that feeling.

Maybe it’s a part of getting older, or maybe it’s jealousy due to not being young any longer, but the idea here is that people are entertained by something they’ve seen dozens, if not hundreds, of times before. The teenage movie cliches that are out there to be seen are just about as predictable as any other movie cliche, and one can almost set their watch by when they’re going to happen. The fact that people continue to push these ideas makes it obvious that the ideas that are out there to be used and manipulated in one way or another aren’t given a lot of faith, and the reality that’s out there is something that people don’t think that viewers want to see. Some of us can remember our high school days spent among people that might have identified with certain cliques but didn’t separate people in such a manner and simply tried to get along with everyone. A lot of us should be able to say that we knew plenty of people that would be identified as jocks but still played D&D, or band members that were into extreme sports and were anything but honor roll students. The attempt to divide and conquer by creating separate groups in movies is likely to keep things as identifiable as possible so that people aren’t confused about who belongs to which clique. The only problem with that is the fact that in many schools around the country, cliques are about as cliche as it gets, even if they do still exist.

Plus, with all the flak that 80s movies have been getting, from stars such as Molly Ringwald, who was a big name back then, it’s hard not to laugh since The Kissing Booth features a lot of the same content, but perhaps it’s toned down so there isn’t as much of a problem. If you’re not picking up on the sarcasm it’s only because it’s difficult to do when writing. But the issues that some folks have with other teen movies are very prevalent in this one as well since the idea of creating a realistic high school movie isn’t always in the cards for one reason or another, likely because it might not be seen as that worthwhile, and also likely because if people were to see how a real high school functions their illusions might be shattered. Yeah, that’s bound to happen when the sun starts setting in the east and rising in the west. A real high school setting isn’t a guaranteed crowd pleaser and movies like this are often shown to push the fantasy of what many people wanted high school to be, not what it actually was. Again, there are likely a few high schools out there that might have been run this way and there are folks that might have had this type of experience, but at the same time, it’s an anomaly and the type of story that gets people talking and keeps them entertained without having to think of what reality is bound to provide since it won’t come with the same drama that can be so easily pushed through with an inner monologue and a few chance encounters. In other words, this isn’t real life or how it works, since real life is a lot messier at times and tends to be less forgiving.

But hey, it’s a great way to just sit and chill and let your brain go on vacation for an hour or more, kind of like high school can be sometimes.