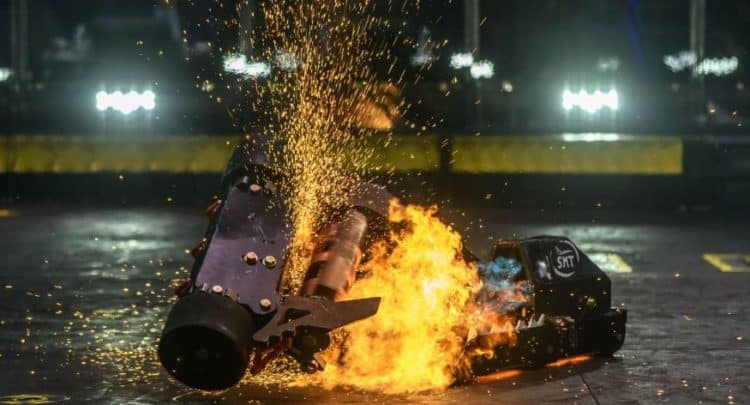 People with an interest in robots might be familiar with BattleBots. Said show started up on Comedy Central, but in the present time, its home is the Discovery Channel as well as its sister network Science. Moreover, it should be mentioned that BattleBots is now on a new season, which should come as very welcome news for fans of robot on robot violence. Here are 10 things that you may or may not have known about BattleBots:

Some people might be familiar with the fact that BattleBots has a connection with a British show called Robot Wars. However, it is interesting to note that BattleBots isn’t descended from that particular show but rather an earlier show with the same name. In short, what happened is that Marc Thorpe launched the initial version of Robot Wars with funding from Sm:)e communications, with the result that when the partnership broke up, Sm:)e communications licensed the show to a company in the United Kingdom while the robot builders started up their own competitions.

2. Lots of Matches Never Make It to the TV Screen

BattleBots sees a lot of matches. As a result, it should come as no surprise to learn that most of the matches never manage to make it on to the TV screen, seeing as how the show has a very limited run-time. This has become more and more true over time because of the rising interest in robot fights as well as ever-improving robot-building capabilities, which have combined to make for more and more competitors.

Some people might remember BattleBots because of its time on Comedy Central. Said network required the show to have comedic elements, with the result that particular era of BattleBots has sometimes been described along the lines of a parody without being a parody. In any case, the modern BattleBots is no longer required to follow said rules, which failed to save it from cancellation when Comedy Central made a choice to return to more traditional forms of comedy. As such, interested individuals who remember the show best because of the Comedy Central era should expect more focus on the robot fights than on shoehorned-in comedic elements.

Like a lot of competitions, BattleBots has seen continuing refinement to make for better entertainment. This is particularly important in its case because there are better and worse ways to build fighting robots, meaning that leaving the rules unchanged for too long has been known to result in robot builders “solving” the competition. Something that makes for more boring match-ups, which in turn, make for fewer viewers and thus falling revenues.

One of the most notable changes when BattleBots came back on to the air was the simplification of weight classes. In short, what happened was that one weight class was instituted for the entire competition with weight limits based on those of the Heavyweight and Super Heavyweight classes on the original competition.

Speaking of which, another change for the revival of the show was the introduction of flamethrowers. On the one hand, the flamethrowers have been spectacular to see in action, which is perhaps unsurprising considering their basic nature. On the other hand, what would do horrendous damage on humans isn’t quite as good when applied to creations of metal and other insensible, not so flammable materials. However, that isn’t to say that the flamethrowers have been wholly useless because there have been some spectacular match-ups featuring their use.

Currently, BattleBots features various kinds of fighting robots, thus making for a wider range of potential match-ups than otherwise possible. Something that should come as welcome news for those who are concerned about the show being too repetitive in nature. With that said, people who remember previous eras of BattleBots might be glad to know that a lot of the familiar types are still around, as shown by the flippers as well as the spinners.

Of course, this means that the robots still have various kinds of weaknesses as well. For instance, while spinners have seen plenty of improvements over time, their basic structure means that they still take some internal damage whenever they actually come into contact with their opponents. Something that can turn match-ups with more durable opponents into tests of endurance. Besides this, it is interesting to note that the introduction of new elements has made for new weaknesses as well. It isn’t a regular occurrence, but there have been cases of the fuel tanks of flamethrower-bearing robots being impacted in such a manner that they explode with considerable force.

9. Nightmare Is Still Around

Speaking of which, it is amusing to note that Nightmare is still around, which is rather remarkable considering that it showed up at the very first BattleBots competition ever held in 1999. Based on this, it should come as no surprise to learn that it has managed to build up a very impressive record over the course of two decades. However, Nightmare has also been somewhat inconsistent when it comes to its victories and its defeats, which to be fair, isn’t necessarily a bad thing for the people watching these robot fights.

Bombshell is a robot that some people might want to keep an eye on because of its wild swings of luck in the last season. In short, it got knocked out of the regular season in 2018 in spite of a strong performance in 2016. However, it managed to get back into the competition by winning the Last Chance Rumble, which was followed up by it knocking out the dreaded Tombstone. After which, it got knocked out by Lock-Jaw in the quarter-finals.