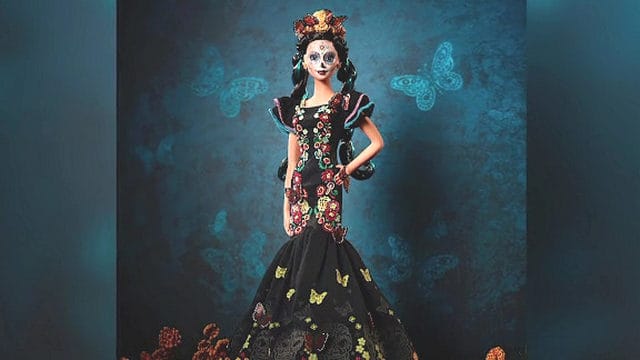 Mattel is releasing a Dia de los Muertos Barbie that makes for a very striking image. In part, this is because she is wearing a long black dress that has been embroidered with hearts as well as butterflies. However, it should also be noted that her face has been painted with a skull while her head has been crowned with marigolds and monarch butterflies. The result should be very recognizable for those who are familiar with Dia de los Muertos, which means the Day of the Dead.

What Is the Day of the Dead?

The Day of the Dead is a holiday celebrated by Mexicans as well as people with Mexican heritage. Like its name suggests, it is meant to be a time for the participants to remember those who have passed on. However, it isn’t supposed to be a day of mourning so much as a day of celebration, as shown by how a lot of the practices are meant to encourage the dead to visit the living.

For example, it is common for participants to visit the cemeteries where their loved ones are buried for the purpose of cleaning their burial sites before setting up altars with offerings. Often, said offerings consist of three tiers, with the first tier meant to identify the dead person, the second tier meant to make the dead person feel welcome, and the third tier meant to provide the dead person with the means to see as well as the means to refresh themselves. However, it is interesting to note that it is common for participants to add calaveras as well as orange marigolds throughout the altar. The calaveras are decorative skulls made from either clay or sugar that can trace their origins to pre-Columbian Mesoamerican cultures, while the orange marigolds are thought to guide the dead to the offerings.

Likewise, food and drink play a very important part on the Day of the Dead. As stated earlier, calaveras are common, though they are but one example of the skulls and skeletons that are ubiquitous on said occasion. However, other foods are both numerous and wide-ranging in nature, with some examples including but by no means limited to tamales, chalupas, and sweet rolls called pan de muertos. Meanwhile, drinks associated with the Day of the Dead range from atole and masa drinks to Jamaican ice tea. Pulque is a very traditional choice as well, though nowadays, it isn’t uncommon for participants to use some other alcoholic beverage that was particularly popular with the dead person or dead persons being remembered.

Besides this, it is worth mentioning that the Day of the Dead can take on a wide range of forms in a wide range of places because there are a huge number of local traditions. Furthermore, it is very much a living holiday, which is why it continues to change with the times while still retaining a close connection with the past.

How Did the Day of the Dead Come Into Existence?

Speaking of which, the Day of the Dead has a very strong connection with Mexico’s pre-Colombian roots. To be exact, there are clear influences that have carried over from the Aztecs as well as other Mesoamerican cultures, which have been mixed with Christian influences to create the holiday that exists in the present time.

In short, the Aztecs tend to be best-known in pop culture because of their human sacrifices, which were indeed a major part of the Aztec religion. This can be traced to the fact that the Aztecs saw the cosmos as a very inhospitable place. For example, the Earth was made from dismembered monster that still lived, which was why it had to be fed human blood for it to continue nourishing the crops. Likewise, the Moon and the Southern Stars waged a ceaseless war on Huitzilopochtli, who was either the Fifth Sun or the chief protector of the Fifth Sun, which was why he had to be fed human blood to keep his strength up.

With that said, Aztec culture wasn’t wholly doom and gloom. For instance, while the skulls and skeletons can seem rather ghoulish to outsiders who are used to thinking of those things in that particular light, the Aztecs saw them as the seeds of new life. In fact, there is a story from Aztec mythology describing how Quetzalcoatl ventured into the Aztec underworld Mictlan to retrieve the bones of the human race, which had been destroyed during the end of the Fourth Sun. There, Quetzalcoatl encountered Mictlantecuhtli, who was the King of Mictlan. In some stories, he managed to steal the bones, while in other stories, he managed to reclaim the bones by overcoming Mictlantecuhtli’s challenge. Whatever the case, Quetzalcoatl proceeded to use his own blood to resurrect the human race, thus restoring them to a world lit by the Fifth Sun.

On a related note, Mictlantecuhtli is sometimes believed to have a connection with the Day of the Dead as well. In short, Mictlantecuhtli had a spouse named MictÄ“cacihuÄtl, who shared a lot of the same characteristics. However, while Mictlantecuhtli has been reduced to a historical footnote, there are people who believe that Mictlantecuhtli has managed to make into the present time in the form of Santa Muerte. For those who are unfamiliar, Santa Muerte is a folk saint of both Mexican and Mexican-American folk Catholicism who is associated with healing, protection, and outcasts. On top of this, Santa Muerte has a strong connection with the Day of the Dead, which is perhaps unsurprising when she is a personification of death depicted as a skeleton dressed in female costumes of various kinds.

Regardless, the fact that Mattel has chosen to release a Day of the Dead Barbie is an interesting example of how it is reaching out to a wider range of consumers than ever before. Said phenomenon is by no means limited to Mattel, though this is certainly a particularly striking example of the products that it can inspire.