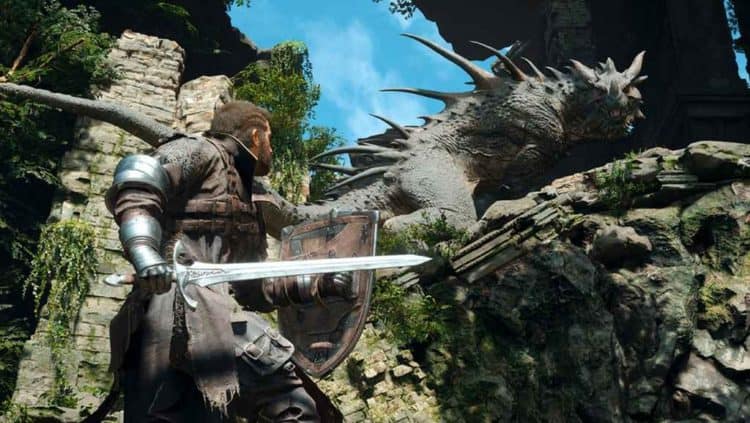 Back in September of 2018, an open-world fantasy epic was called Project Awakening was introduced to the gaming community that raised a lot of eyebrows. It was being developed by Japanese developer Cygames. It appeared to be a more action-oriented Dark Souls-inspired title that showed a knight battling a rather well-designed dragon. It was clear that some of the footage was actual gameplay that was interlaced with cut-scenes of the campaign. After the initial trailer was shown, Cygames have been very “hush-hush” about its development. It left a lot of gamers scratching their heads on what this game was about and even if it is still in the pipeline. The trailer gave a good indicator of what kind of world this game will entail and how it will play. From what was seen, it is clear that Project Awakening is going to be a third-person ARPG that echos the dark ages in terms of its scenery and world design.

According to the gameplay that was shown, even though the art design is reminiscent of Dark Souls, the actual combat flows more like Monster Hunter. The knight was rolling, dodging, and quickly striking the dragon with his sword. Evidently, the combat won’t have a sense of weight that Dark Souls and its ilk has, instead it appears to be more “arcadey.” Since this title is going to be an ARPG, it’s a good chance that it’s going to be open-world. Open-worlds and ARPGs tend to go hand-in-hand with each other and this title won’t be an exception. The story is currently under wraps, but the last clip of the trailer gave a hint of what it’s about. Apparently, there is some sort of titans walking the planet that is somehow related to the terraforming happening to the environment. The trailer showed a tree mutating into a crystallized version of itself, eradicating all traces of organic material. It is not much to go on, but it sure gave an ominous tone to the story.

The Dark And The Mystical

As of right now, details about the lore that Project Awakening is a guessing game. In terms of this game’s information, there are more solid details that involve its gameplay mechanics. This fantasy epic can be played solo or up to twelve people in a single party. Players can mold their avatar to look like anyway they want and can have unique features to call their own. The upgradable abilities that are a staple in any kind of ARPG will be non-existent here. Cygames is taking a new approach with how players progress their character. One example is that if a player likes carrying armor and a heavy sword, then the avatar will organically get bigger muscles and more carrying strength. On the same token, if players like wearing light garb and use one-handed weapons, their muscles will be leaner and their movement will be quicker. The character will automatically hone their skills based on how the player uses their avatar.

Since this game was originally going to be released on the PlayStation 4, the long development cycle has enticed the developers to switch gears. Now, it appears that this game might be coming exclusively to the PlayStation 5 instead. The team over at Cygames has over 100 people and they’re constantly working and tweaking with the game’s engine to make it the “best engine” for this generation. Some people on the team even had experience with the Metal Gear Solid series, which says a lot about the quality they are shooting for. The developers are utilizing the Cyllista Game Engine to where the graphics will be totally photorealistic. Since the last time gamers saw Project Awakening in action was a few years ago, it seems that the overall design might be getting a more “seedy” or “earthy” makeover. This engine is being built from the ground up by the developers over at Cygames. Therefore, while Project Awakening is being crafted by this engine, the technical team will perpetually enhance it. This is the first time the developers are shooting for a realistic aesthetic for their work and it’s a tall order, for sure.

Players will be able to enter dungeons, towns, and other locations without a break in the action. The goal at Cygames is to create a totally immersive experience without any hiccups in the gameplay. Although details of the game are still being ironed out, some of the aforementioned gameplay mechanics are subject to change. At the very least, the developers over at Cygames are now on the right track with making the game that they originally envisioned. The jump to next-gen hardware now provides a whole new toolbox that will enable the developers to experiment with their engine and create something truly next-level.

There’s still much to discover with Project Awakening. The fact that the project is still in development should get gamers excited about what’s in store for them. Maybe, there will be a new trailer ready to show by the end of the year. As of right now, nothing is concrete. It’s very likely that this title will be a PlayStation 5 exclusive, however, maybe it will be a cross-generational product, as well. Despite that many details are speculative, the fact that a new epic open-world fantasy ARPG being made is always welcomed.