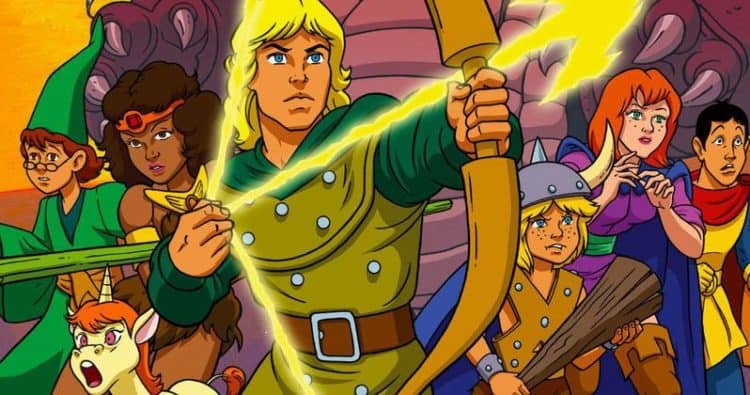 It’s impressive to realize how many people know anything about Dungeons & Dragons, but it’s even more impressive to realize that a lot of those folks remember the original cartoon from back in the early 80s. Anyone that’s kept up on that idea and still knows something about D&D might be excited to hear that some of their favorite characters from the TV series might be getting brought back in The Wild Beyond the Witchlight, a D&D adventure that will be starting up eventually and will be bringing back a few of the favorite characters from the animated series. Whether it’s for the sake of nostalgia or because someone thought that it would be a good idea, it’s bound to be a lot of fun for those that can remember back that far. The fun of D&D of course is the imagination that goes into it, and the experience of having fun with the story as it progresses. The cartoon, which featured a bunch of kids that found themselves in the fantasy world and had to take on the abilities and gifts provided by the Dungeon Master to find their way home.

As story ideas go it wasn’t too bad since it was a lot of fun for kids that could imagine themselves being pulled into a fantasy realm where they had to fight to survive and follow the rules of some strange narrator that had almost absolute power over the world they found themselves in. Another adventure with this group, or even just a few of them, should be intriguing since it should be enough to keep the attention of many people. Anything D&D is usually a lot of fun since the depths of a person’s imagination and the many different directions that are there to be explored offer up a wide array of different adventures that could be taken on.

Looking back at the animated series now it does feel a little silly, but this was what we had as kids and back then it was highly entertaining since it didn’t take much to make us happy and really get the inspirational juices flowing. Plus, D&D has been a loved game for a while now and it’s fair to state that it’s become one of the more popular games as well. There is a certain stigma that’s been attached to it for a while, and it’s one that is still there, even if it’s easier to ignore since being called nerds, geeks, and freaks isn’t such a big deal to a lot of people, and likely because there are plenty of people who play D&D that would challenge anyone to try and use their imagination in a productive way that doesn’t involve insulting anyone unless there’s a good cause. This game has been around so long that one would have almost expected it to have taken off in a big way, but it almost feels as though, apart from online games and various other projects, D&D has been content to stay behind the mainstream, where it’s been thriving for a while.

The movies that have come out have been horrible, which is surprising since the first one had at least a few good actors. But the movies that followed, huh boy. Hopefully this idea to bring in characters from the animated series to The Wild Beyond the Witchlight will be a good idea and will create a bit of interest that the game could still use to keep pushing forward in a manner that will allow it to build and give more credibility to the movie that’s coming within another couple of years. A few big-name actors have already attached their names to the movie, so it’s hopeful that things will come off looking like a blockbuster instead of a massive disappointment as has already happened in the past. Whatever does happen though, one can’t help but believe that D&D will continue to be a favored pastime of many people that happen to love using their imagination in the pursuit of a great and entertaining story. That’s the whole point of D&D after all, to tell a great story and to just have fun with the people that want to enjoy it with you.

Among the many characters that can be pulled from the vast collection of books that make up the world Faerun, which D&D primarily tends to operate off, one would think that many other notable characters might be pulled for their expertise and skill, and their celebrity status in the eyes of the fans. But pulling characters that many fans might remember should have this effect as well, since digging in the memory vaults shouldn’t be too hard for a lot of people that will want to see what’s going on. It should be interesting, to say the least.