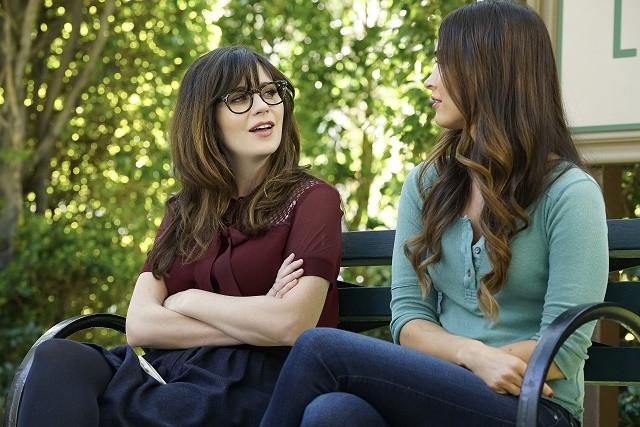 Most shows use their 100th episodes to try and tell a big, elaborate stories, or to parade a bunch of old characters in for cameos (this isn’t a knock against Once Upon a Time, but that’s exactly what that show did for its 100th episode on Sunday).Â “Goosebumps Walkaway” is more low-key, though, while still being completely and totallyÂ New Girl. While far from a flawless episode, this half hour perfectlyÂ illustrates what this show is about and what has allowed it to run for 100 episodes and five seasons: the chemistry of its cast and the friendship between its characters.

The two main stories of “Goosebumps Walkaway” are pretty simple. Nick and Reagan struggle to say goodbye to each other, with Jess attempting to help them as she searches for the juror that she had a connection with during the trial. Meanwhile, Winston and Cece teach Schmidt a lesson in letting loose and not worrying about what other people think. Like I said, compared to most 100th episodes, which typically center on a wedding or some type of other “major event,” New Girl keeps things fairly simple, and that’s exactly how it should be.

New Girl hasn’t been a successful and beloved comedy for 100 episodes because it tries to reinvent the wheel. At its core, the show is a hangout sitcom combined with elements of a romantic comedy, a series about how friendship can help you navigate the rough waters of life, and how these relationships can become something more, whether that means romantically or in a more familial way. And that’s what the loftmates on New Girl have become over the course of 100 episodes; they are a family, and “Goosebumps Walkaway” reminds us of that with two simple scenes.

Both of these scenes come near the end of the episode, and the first one is the conversation between Nick and Jess in her bedroom. It’s not a stretch for some viewers to see a rekindling of the romantic spark between the two roommates here, as both of them reflect on their possible romances with Reagan and Gary and how and why they didn’t work out. However, more than that, it’s reaffirmation of New Girl‘s central relationship, the true heart of the show, which has always been Nick and Jess, even before they got together and after they broke up. There’s incredible sincerity and warmth in how Jake Johnson and Zooey Deschanel play these scenes together, and the little exchange that their characters have (“I missed ya, kid.” “I missed you, too”) says so much about the power of their relationship in just a few words.

The other scene that really represents what New Girl has always been about is the final one of “Goosebumps Walkaway,” where Cece, Jess, Winston, and Nick all join Schmidt as he freestyle dances to “The Hustle.” It’s a goofy, silly scene, one that’s reminiscent of other sequences from past seasons of New Girl, such as the group line dancing with Coach in the bar last season, or even the guys coming together to sing “Time Of My Life” to Jess in the show’s pilot. It showcases the series’ sense of fun, but it also proves that this is a group of people that have done and will continue to do everything together, no matter how awkward or stupid it may seem. If that’s not true love, then what is?

I focus on these two scenes because they’re the best parts of “Goosebumps Walkaway,” which is a fun but somewhat chaotic episode. Jess’ return and her interactions with Reagan aren’t as smooth as one could hope, and although the Schmidt/Winston B-plot was a nice change-up from Schmidt or Cece always having to help each other through their problems, it needed a little more time and attention to fully work for me.

Still though, it’s terrific to see Winston having more of a serious role in storylines as of late, and the resolution of Nick and Reagan’s romance (for now, at least–there’s a chance Megan Fox could come back) was certainly satisfying, particularly their sweet, matching goodbyes (“Sayonara, Sammy”). Plus, as wonderful as Fox has been as Reagan over the past few weeks, it’s so great to have Deschanel back on the show; I didn’t realize how much I missed Jess until she started singing a “Thank you” song to Reagan in the same tune as theÂ Golden GirlsÂ theme song.

“Goosebumps Walkaway” isn’t a flawlessÂ episode of New Girl, but it perfectly represents what this show is: wacky, messy, funny, heartwarming, and incredibly entertaining. It’s been a marvelous run of 100 episodes for the FOX sitcom, and I can’t wait to see what New Girl has in store for us as this fantastic fifth season continues.

What did everyone else think about New Girl‘s 100th episode? What’s your favorite episode of the show? Comment below and let me know.Â