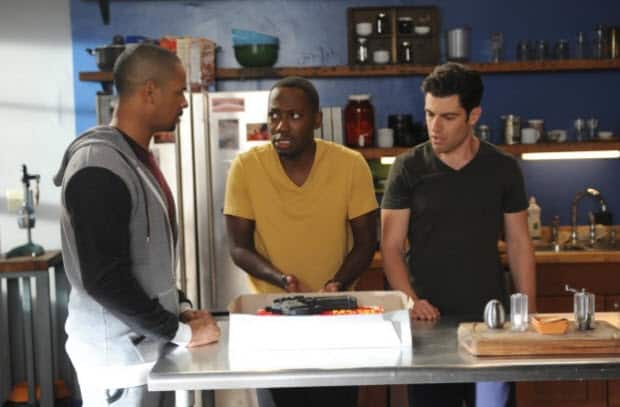 Last night’s episode of New Girl addressed the “Coach issue” that a lot of people having been (although myself not included in that) by tackling his friendship, or lack of one, with Jess head on. While Coach has been brought back into the fold on New Girl quite seamlessly, it has mainly been with the guys. Nick, Schmidt, and Winston already have a history and chemistry with Coach because of their years of friendship together. Jess, however, is simply Coach’s “buddy’s girlfriend,” and she wants more than that with him.

So how does Jess plan on becoming fast friends with Coach? Well, by faking her love for his favorite basketball team, the Detroit Pistons, the arch rival of Nick’s Chicago Bulls,0, thus establishing the episode’s hilarious conflict: the standoff between Nick and Jess.

Having the two main plots of the episode (Jess’s earnest desire to be friends with Coach and her hilarious fight with Nick) revolve around the idea of sports rivalries was a great move by the New Girl writing team as it, first and foremost, gives the episode a strong central focus, and also allows any and all viewers to transport themselves into the situation. No matter how superficial or pointless it may seem, everyone out there can understand the utter disgust of watching your favorite team’s rival beat you in a game, whether it’s the Pistons beating the Bulls, or, in my personal case, the New York Mets or Atlanta Braves winning against my Philadelphia Phillies. It’s always a horrible thing to watch.

And it’s through this inherent bitterness between rivals where “Basketball” finds most of its comedic gold, as we watch Nick and Jess “turn off the tap” on each other until the other one gives and starts rooting for the other team. Their struggle to refuse each other’s advances and Nick’s exasperated mistakes during their arguments (how he mispronounces Jean Valjean or his mumbling comparison of sport rivalries to Hamlet) are what lead to the episode’s biggest laughs. (I also especially loved Nick literally kicking Jess out of his bed while she was wearing a Pistons shirt.)

But “Basketball” wouldn’t be an episode of New Girl if it focused solely on the comedy and forgot about the more heartfelt moments. Jess’s sadness over her disconnection to Coach can truly be seen through Zooey Deschanel’s performance, specifically as Jess, finally admitting defeat, leaves Coach alone at the bar to watch the game.

However, it’s the next scene in the sports bar, where Nick talks to Coach about how important his friendship is to Jess and explains the type of person and friend that Jess is, where New Girl really excels. Yet again, despite people’s complaints that he is an immature, careless boyfriend, Nick Miller shows, through his speech to Coach, why he is worthy of Jessica Day.

And it’s also a big moment for Coach, too, who doesn’t simply sit and nod at Nick’s words, but actually listens and takes action, as he tries to open up to Jess at the most inopportune moment at the episode’s conclusion. Here we continue to see Coach’s evolution as a character. Damon Wayans Jr. has been doing a great job at bringing Coach to life, and now, since the writers have given him more to play with than simply yelling at people or things and being “macho,” the quality of the character is beginning to match up with the quality of the performance.

“Basketball” is a promising sign for Coach’s character and another impressive moment for New Girl early here in 2014, as it gives us, to cheesily use a sports metaphor, another “slam dunk” of an episode.

– I didn’t talk about Schmidt and Winston’s storyline in the main part of this review, as Winston shadows Schmidt at work and helps him deal with an older, undermining co-worker. However, that didn’t mean that I didn’t enjoy it. This plot provided a bevy of laughs, especially Schmidt’s confusing metaphors (“The mino tips his tiny hat to the shark and then lays down on the toast to be eaten.”), while also giving us significant plot and character movement: Winston wants to become a cop!

– It’s been one episode, and I already love the decision to make Cece a bartender. But can we please get some scenes with her and Nick working together soon?

– Schmidt shows off his three infamous poses to Nick: the Half-Nelson, Black Licorice, and the Guy Fieri. Nick’s response to the last one: “I can just taste the sauces.”

– “Just brushing my teeth…they’re filthy.” “I got some real [good] pics in here. There’s one of me as a  mayor, lookin’ out the window, deciding the future of my city.”  The art of seduction by Nick Miller, everyone.

– Why Winston will be a good cop, according to Schmidt: “You already have high cholesterol and weird people skills.”

– Lamorne Morris’s Denzel Washington impression was one of the greatest things New Girl has ever done.

What did everyone else think of last night’s episode of New Girl?