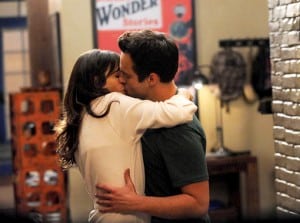 Wow. That’s what I was left saying after this week’s episode of New Girl, “Cooler,” while my friends watching with me girlishly screamed “YES!” (most likely because they are all 20- and 21-year-old girls who are obsessed with Nick Miller. My one friend, Caroline, even says that she would “so eat a burrito off of Nick Miller.” What that entails, I’m not entirely sure, but I’m pretty positive that it involves lots of guacamole). What an ending. The kiss. THE KISS. A kiss that New Girl has been building towards through its first 39 episodes, and one it has been earning for itself all season long with plenty of well-written and well-acted Nick/Jess scenes. Jake Johnson and Zooey Deschanel have been knocking it out of the park all season long with the budding chemistry between Nick and Jess, and when Nick finally locks lips with his beautiful, blue-eyed roommate, it’s cathartic, not just for the characters, but for us as an audience.

Also, I loved the way the writers crafted this moment between Nick and Jess. It didn’t happen solely because it was forced upon them by another game of True American (a great New Girl gag that I was beyond happy to see brought back), as Nick tells Jess that he’s not going to kiss her, “not like this.” Instead, Nick Miller, who has stated throughout the entire episode that his new coat (despite being made for a woman) gives him confidence, is forced to take the jacket off and give it away, becoming emotionally naked, fully honest with himself and Jess. When he grabs Jess, kisses her, and Jake Johnson perfectly utters that simple yet amazing line (“I meant something like that), we are seeing Nick Miller as his most authentic, confident self. Gone are any reservations about his body or his lack of money; he knows what he wants this moment with Jess to be, and he takes it. Simply fantastic work from both the New Girl writing team and from Jake Johnson and Zooey Deschanel. I feel like I could write this entire review about how well-done the kissing scene was, but that would be short-changing what was, in itself, even without the kiss, another fantastic episode of New Girl.

Aside from “The Kiss,” New Girl continues to show why True American is the absolute coolest drinking game ever created, as the gang gets a chance to yell out “JFK” and “FDR” again, only this time it’s Strip True American, in hopes that Nick (or possibly Schmidt) will be able to bed Holly (played by the gorgeous Brooklyn Decker), who has a very odd attraction to sad men. While Nick ends up behind “The Iron Curtain” with Jess, Schmidt continues to pursue Holly, describing his breakup with Cece, which leads to another great, small scene between Hannah Simone and Max Greenfield, when Cece shows up at the loft to check on Jess. Along with the core friendship between the five main characters and Nick and Jess’s developing relationship, the romance between Schmidt and Cece is the other key component of what makes New Girl so great, and I still cannot wait for this crazy couple to finally wise up and get back together.

On the Winston side of things, he enlists Brenda Song’s Daisy to help him talk to women. This leads to some great mumbling and stammering from Lamorne Morris (“Hey girl, what your name is?” Winston says at one point), and by the end of the night (after discovering that the engagement ring that she is wearing is a fake one to ward off random guys), Winston is kissing his “teacher,” taking charge and finding the right moment, similar to how Nick does with Jess. Winston’s storyline was really funny and enjoyable, and I can’t wait to see where his relationship with Daisy goes.

While I mainly focused on the romantic plots, “Cooler” also offers up numerous hilarious quotes (which can be found below) and some great, goofy friendship moments (like the guys’ “crunk” dancing before they head out to the club). After a letdown last week, New Girl really bounced back with yet another fantastic episode in what is proving to be one of the best seasons of any sitcom th 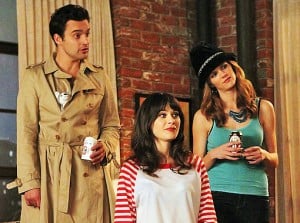 at I’ve ever seen.

– I loved the montage of “Bored Jess” in this episode. My favorite part being when she races herself, crosses through the finish line, and then calls out, “Silver! Damn you, Zimbabwe!”

– I also really liked the idea of Jess being Nick’s “cooler,” which was a similar concept to him being her “fluffer” from earlier in the season. The running joke of it throughout the episode made me laugh.

– Schmidt calling out “It’s Abu Nazir!” during True American made my whole night. I love Homeland and any time another one of my favorite shows, like New Girl, references it, I can’t help but smile.

– I’ve said it a million times before but I’ll say it again: Nick is the man. Seriously. The last scene from this episode solidifies that if you had any doubts. He should forever be called Nick “The Man” Miller.

– “Come on, Inspector Gadget! Inspect those tonsils!” – Winston to Nick about kissing Jess.

– “Sometimes I hear her name when the wind blows. Whoosh—Cece!” – Schmidt

– “A taffy pole on a hot summer’s day.” – Schmidt’s description of his “unstimulated” penis.

– “I think it might be gang-related. I’ve always been worried about my blue curtains. Crips…” – Jess to Nick on who is making the noise outside their door.

– Schmidt: “I can’t believe you got us kicked out of the discotheque, Nick.” Nick: “I didn’t even do anything!” Winston: “Dammit, Nick, take the coat off. It freaks girls out.” Nick: “Maybe they’re freaked out because you’re not wearing a trench coat!”

– Best quote of the night: “I meant something like that.” – Nick “The Man” Miller to Jess after he kisses her.