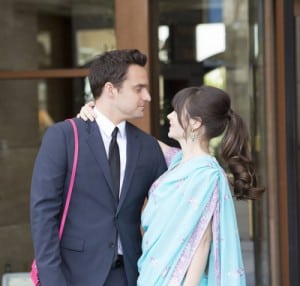 Looking back at season two of New Girl (a season that ranks up there with the all-time best in TV, in my opinion), one can clearly see the moment where New Girl went from being a really, really good show to a great show, and that happened in “Cooler,” when Nick and Jess finally kissed and the two of them had to figure out “What the hell do we do about this now?” With Nick and Jess’s evolving relationship, New GirlÂ finally found a clear focus for itself.Â New Girl still remained a show about friendship and the struggles of one’s early thirties, but it became less about watching five people just hang out and make jokes and more about the hopes and fears of two people that really care about each other and want to make it work but aren’t sure if that’s possible.Â By being really authentic with its two main characters, New Girl ensured that Nick and Jess’s relationship was not only the focus of the show but also its heart.

In “Elaine’s Big Day,” New Girl‘s season two finale, the show’s heart was fully on display at Cece’s wedding, as Nick and Jess continued to deal with the romantic tension between them and lay out the issues and trepidations that they had moving forward. Jess admitted that a small part of her was scared that Nick may be too immature for a relationship; Nick stated how he didn’t want to disappoint Jess and let her father be right about him. It really looked like New Girl was going to take the easy, less interesting route and have the two of them break up before they even got “officially” together, giving us a season three that was sure to be filled with longing glances and a lot of pining. After all the buildup of the relationship between Jess and Nick, I was disappointed, thinking New Girl was simply going to press the reset button and have us continue to watch the two of them dance around each other for another whole season.

Thankfully, however, at episode’s end (in another truly great romantic scene between Jake Johnson and Zooey Deshcanel), Nick and Jess both declare how much they want this thing to work out between them (as Nick gets the inspiration to talk to Jess after a pep talk from Winston) and hop in the car together to drive to who knows where. This scene is a great final moment for a season of television that truly examined the character of Nick Miller (from his family life to his insecurities and everything else in between) and the connection between him and Jess. Deschanel and Johnson nail every second of it, and I could not feel more fulfilled with a conclusion to this season, which provides some good closure to various storylines while also leading us into an even more exciting season three. How will Nick and Jess work together in a relationship? Will Jess’s optimism and perkiness continue to clash even more with Nick’s grumpy cynicism? I cannot wait to find out, and that’s the point of a good season finale: to leave you wanting more.Â A great finale to an amazing season of New Girl. 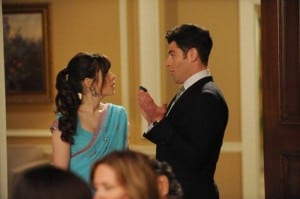 – So my review sort of became a piece all about Jess and Nick, but I did love other things in this episode as well. For example, having Winston’s poor ability at pranking come back and play a main role in the finale was a great choice by the New Girl writers. It was really funny and was a great showcase for Lamorne Morris. Also, his delivery of this line after getting bit by the badger was comedy gold: “Hey bartender. Can you call an ambulance? I’m about to bleed out.”

– So the big cliffhanger that had been teased is whether Schmidt will pick Elizabeth or Cece, now that she has admitted that she’s still in love with him. I’m conflicted. I know I might be in the minority, but I really like Elizabeth and would like to see her stay around. However, I’ve also wanted Schmidt and Cece together all season long, so I’m not really sure. I think it would be fun though to see Cece pining for Schmidt next year, at least to start season three.

– The overall broadness of pranking Cece’s wedding really worked because it came from a source of authentic emotion. The New Girl writers did a great job at making us really believe that Schmidt only wanted to help Cece as a friend, and in the end, he was right. She didn’t wanna go through with the wedding.

– Max Greenfield had a lot of great moments in this episode, but for some reason, I could not stop laughing when Schmidt said “Jess, he’s in the ducts. The ducts!” Greenfield’s delivery and Schmidt’s repeated use of “the ducts” almost had me crying.

– The much anticipated guest appearance by Taylor Swift only lasts a minute, but I thought she was pretty funny as Elaine, Shivrang’s true love, who he runs away to be with after his and Cece’s wedding gets ruined, thus giving the episode its unusual title: “Elaine’s Big Day.”

– “Before you say no, don’t say no” – Jess to Nick. I cannot get over how well that final scene between them was done. So real, believable, and satisfying.

– And with that, New Girl‘s second season is officially finished. Thank you to everyone who has read these reviews and commented on them. It really means a lot. I’ve had a great time reviewing this whole season, watching New Girl evolve and improve from week to week, and I hope you enjoyed it as well. Until the fall, have a great summer everyone!

What did everyone else think of the finale?