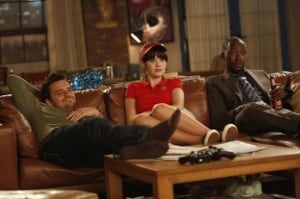 Last night’s episode of New Girl, “Neighbors,” may have not been as consistently funny as the show’s first three episodes this season. However, it still provided plenty of laughs and continued to display the growth and strength of New Girl, which has become, in my opinion, one of the best comedies on TV.

“Neighbors” primarily focuses on Jess and Schmidt and their interactions with the new “hipster” neighbors who had just moved in across the hall. Schmidt jumps at the opportunity to impress the hipsters (because he believes that they think he is too old) at a “chill-hang” that they are having, but he fails miserably and Jess, for once, is the “cool” member of the gang. With her new part-time job at the Casserole Shanty (where a large crisis is needing more beans for casserole dishes), Jess feels quite comfortable and happy with this slouchy group of friends. For the first time, Jess is part of the “in-crowd,” while Schmidt is on the outside. This new dynamic proves to be quite interesting, because it leads to Schmidt and Jess having a tense conversation, where he expresses how he always tries so hard , while she has simply given up. Jess tries to stand up for herself, stating how it wasn’t her choice to leave her job; she was fired. However, by the episode’s end, this conversation proves to be just what she needs, as she quits her job at the Casserole Shanty and heads to an interview for a new tutoring position. It’s great to see Jess finally getting back into the teaching game, and I’m happy that Schmidt is the one to help her. As New Girl has shown countless times throughout its run, Jess excels with her creativity and passion as a teacher, and even when her students may not exactly love it, we as an audience sure do. Also New Girl continues to make Schmidt into more than the just the typical “douchebag” roommate. He clearly cares about Jess as a friend and wants her to strive to do better because he knows that she can be.

Aside from the Schmidt and Jess storyline, New Girl provided the minor, B-plot of this episode, which involves Nick constantly pranking Schmidt and Winston’s attempts to help. However, Nick keeps reminding him that his pranks are always the worst, because he either goes way too small or way too big (Two of my favorite lines of the night came from this storyline: Winston’s idea of “Instead of pee, we use acid and put it on his face!” and Nick’s simple response of “That’s not a prank. It’s just kind of littering,” when Winston suggests that they put Schmidt’s shoe shavings outside his car). This story doesn’t serve up much in terms of character development, but it let me continue to enjoy the comedic talents of Jake Johnson as Nick. He’s starting to rival Schmidt for my favorite character onÂ New Girl, which is something I never thought I would ever say.

All in all, this was not an amazing episode of New Girl, but it was one filled with enough funny moments and gags that I enjoyed it. The New Girl cast delivers one-liners better than almost anybody else on TV and has such a great chemistry and rapport with each other that I honestly cannot help but find something to love about this show every week. 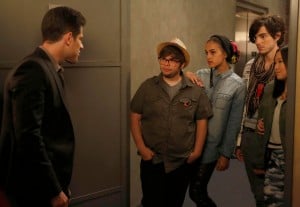 – Seeing that Nick still exhibited “grumpy old man” behavior, even as a young kid, was great. I love the goofy flashbacks that New Girl uses.

– I never tire of Zooey Deschanel’s wacky voices and impersonations on New Girl. I loved her Steve Urkel and Stephanie from “Full House” (“How rude!”), but my favorite moment came when Schmidt yelled out “No!” to stop her from going further with her Frasier impersonation. I wanted to see more of it!

– Nick’s reaction to the hipsters’ “chill-hang” (Simply saying “I can’t do this” before turning around and walking out of the apartment) was priceless and exactly what I would have done. Like Nick, I’m not a big fan of hipsters.

– I didn’t enjoy Winston as much in this episode of New Girl as I have in previous ones, but I have to admit I loved the absurdity and randomness of having him hit Schmidt with a ski (“I’m gonna hit your ass with a ski!”) as the episode’s ending. Nick was right. Always too small or too big with the pranks there, Winston.

– Schmidt had some great lines in this episode, from calling himself a “Jewish Peter Pan” to coming up with a new way of saying constipated (“Const-to-the-pizzo”), but by far the funniest line of the entire night was his asking “Who wants to start an ‘Arcade Fire’?” when he walked into the hipsters’ apartment. My friends and I were laughing for a solid five minutes nonstop.