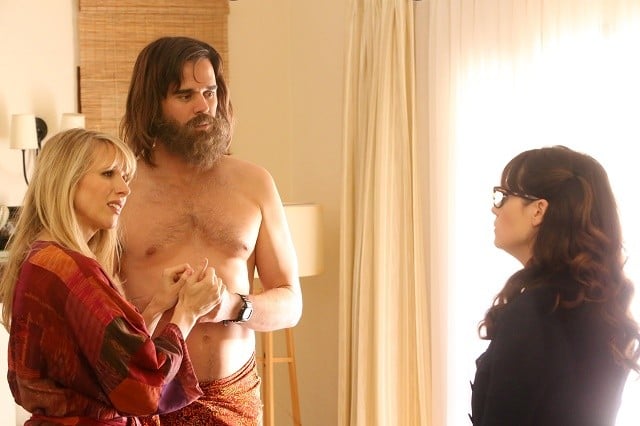 There’s not much to say about “Sam, Again.” It’s another fine, fun episode of New Girl in what has been one of the show’s most consistent seasons yet (Season 5 doesn’t quite stack up to Season 2, but it’s nearing Season 4 levels of entertainment), but there’s not a lot of meat to it; there’s no real emotional core to counter the hilarious hijinks, which is what separates the sitcom’s very best episodes from the merely good ones. And that’s a shame because “Sam, Again” does have the capacity to become something deeper and richer; unfortunately, it just never gets there.

The A-plot of this week’s New Girl revolves around Jess’s potential new job at the Academy of Canyon Banyon, the most progressive school in Los Angeles that’s essentially populated by children hipsters. Students build chicken coops and work out their problems with each other at the Feeling Farm (yikes), and it’s all led by Lucy Punch’s Genevieve, who Jess quickly discovers is dating her ex-boyfriend Sam (David Walton), who has become a bearded, hippie version of his old self.

There’s a real opportunity here for New Girl to examine how Jess’s past relationship with Sam, which imploded after Nick kissed her back in “Cooler,” has helped shape the person she is today ; the series even reminds us how important this romance was to Jess with a quick sequence of flashbacks, from their first night together to their throat-punching break-up. However, Sam’s presence in this week’s New Girl doesn’t really serve much of a purpose aside from being a possible roadblock for Jess as she tries to get a job at Canyon Banyon (her history with Sam makes Genevieve unsure if she should hire Jess full-time) and from being a fun reminder of New Girl‘s incredible run of episodes back in Season 2, where we all watched the sitcom go from very good to legitimately great.

Is it entertaining to have Sam back in the loft and have him and Nick butting heads again? Most definitely; in fact, the Feeling Farm that Jess sets up at the loft is probably the best sequence of the entire episode, as Nick refuses to apologize for kissing Jess, explaining how much he enjoyed their relationship, leading to Sam punching him in the throat yet again and reverting back into his old self. But even with the strong material in that scene, “Sam, Again” still doesn’t explore any compelling or illuminating emotional ground when it comes to Jess and Sam’s history or even Jess and Nick’s. Instead, it’s just Jess being Jess, as she does her best to fix things between between her and Genevieve and her and Sam, and while that’s not necessarily a bad thing, it does feel very surface level for New Girl, especially after last week’s episode did such a terrific job of balancing humor and heart while dealing with a big-name guest star.

Still though, when it comes to pure, laugh-out-loud moments, “Sam, Again” does offer more than a few, particularly from the B-plot involving the sick duo of Nick and Cece, who are quarantined by Schmidt so that they don’t infect him before his big presentation. The two of them lying in bed next to each other, watching that ridiculous puppet show and becoming more and more invested in it the sicker they get, was absolutely brilliant. It made me not only love and appreciate how much New Girl is utilizing Hannah Simone’s comedic talents this season, but it now also has me excited for more Nick/Cece-centric stories. Please give us more of them, New Girl writers.

Despite how hollow most of the storylines in “Sam, Again” feel (even Winston’s date is very rushed, and it’s clear that he’s any closer to getting over Aly), it’s still an entertaining episode of New Girl that mainly seems uneven due to how good the rest of Season 5 has been. Here’s hoping that the next time the show brings back one of Jess’s exes, the writers do a little more with the story and try to balance the jokes with some real, emotional moments. When the writers are able to do that, New Girl is at its very best.

What did everyone else think about this week’s episode of New Girl? Comment below and let me know.

When Jess starts a new job, she unexpectedly runs into one of her ex-boyfriends in another fun episode of New Girl.