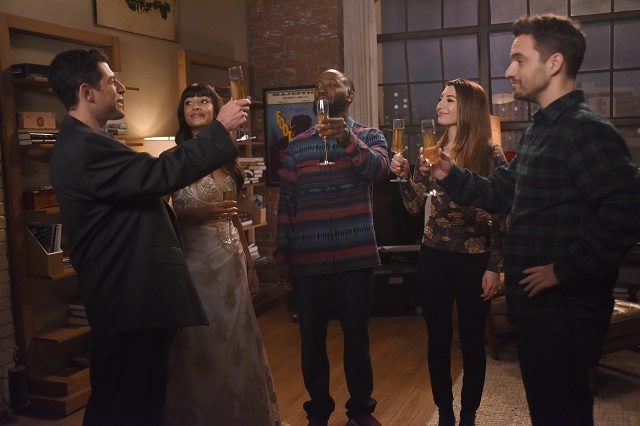 When it comes to holiday episodes,Â New GirlÂ has a pretty terrific track record with very few clunkers and a couple of all-time classics that easily go down as some of the best half hours in the show’s history, and while “Operation: Bobcat” may not go into theÂ New GirlÂ Hall of Fame, it’s definitely more of the latter than the former. This installment finds a way to give pretty much every member of the loft (aside from maybe Nick) an emotionally satisfying story, from Winston’s proposal to Aly to Schmidt and Cece celebrating their “bone-iversary.” However, perhaps the best storyline of the episode involves Jess, who after being beaten down and frequently unrecognizable for most of Season 6 rediscovers her strength and finally allows herself to let out her real feelings.

For most of “Operation: Bobcat,” the show’s characters can’t keep from commenting on just how sad Jess seems during Valentine’s Day. She’s the only person in the loft who doesn’t have a significant other to spend it with, and she’s also forced to watch Nick finally step up and be a great boyfriend for Reagan, the type of boyfriend that she feels like Nick never was when the two of them were dating. Winston even goes as far as to call off his proposal to Aly because he feels so bad for Jess, and he wants her to focus on herself this Valentine’s Day instead of worrying about another couple.

It’s here, after Winston’s comments, where Jess begins to let her emotions free, thanks to prompting from Gordon Ramsay, who cooks Jess dinner as part of a contest she won. In a simultaneously cathartic and hilarious scene, Jess reveals that she’s not sad–she’s angry. She’s angry about Nick’s behavior, about how he was never this good of a boyfriend to her when they were together and that Reagan gets to enjoy his maturity now while all she can do is watch. She’s also angry about all of her friends just presuming that she’s sad; whether it’s Schmidt or Cece or even Winston, they all just assume they know what’s going on inside of Jess’s mind without ever asking her, and they pity her instead of respecting her. By unleashing all of her true feelings to not only Gordon Ramsay but more importantly herself, and by forcing Winston to accept her help, Jess ensures that she will no longer be pitied, that she will stand up, be heard, and do what she wants to do, no matter what anyone else thinks. And since Jess has had such an identity crisis throughout so much ofÂ New GirlÂ Season 6, mostly due to her relationship with Robby, it’s a powerful moment, even if none of her roommates are around toÂ see it.

After Jess’s proclamation of anger, she helps Winston with his proposal plan for Aly, which he’s forced to accelerate after she casually mentions that they should get married when he stops by her apartment for a surprise Valentine’s Day visit. Winston is so surprised that he actually says “no” to Aly’s impromptu proposal, and he and Jess spend most of “Operation: Bobcat” chopping his 21-stage plan into a one-stage plan, as Winston agrees to propose in what he thinks is the most romantic way possible: by dressing as a bobcat in the bus station bathroom where he first realized just how much he loved Aly. It’s a sweet moment when Winston reveals just how important the titular Operation: Bobcat is to his proposal plan, and the fact that it includes him wearing a costume (one that he’s already purchased before even buying a ring) totally fits in with Winston’s extremely weird but incredibly lovable personality.

Of course, since New GirlÂ is a sitcom, Winston and Jess’s plan doesn’t completely work, as Aly hits Winston, giving him a concussion, when he pops out of the bathroom stall dressed as the bobcat (she’s unsure of what animal he is at first). However, with the assistance of Jess and a police-themed choir, Winston is still able to pull off a pretty sensational proposal, one that is just as odd and wonderful as his relationship with Aly is. When she says yes to becoming his partner for life, it’s genuinely touching, nearly reaching the emotional heights of Schmidt and Cece’s engagement, which is quite impressive given that Schmidt and Cece’s romance had been going on for four years while Winston and Aly have hardly been together for one full season ofÂ New Girl. Maybe it’s just me, but I love these crazy kids together.

And speaking of Schmidt and Cece, “Operation: Bobcat” also provides the newlyweds with a solid story of their own, as they struggle with being separated from one another during their first Valentine’s Day as a married couple. Plus, since Valentine’s Day is also the anniversary of when the two of them first slept together all the way back in Season 1 (an anniversary that Schmidt refers to as their “bone-iversary”), the holiday holds even more significance for them than most couples, which is why Cece decides it’s her turn to do something special for Schmidt and sets up a lovely spot for them on the roof of his work so they can celebrate.

Of course, Schmidt and Cece run into trouble from Schmidt’s boss, Kim, who he has been desperately trying to impress so that he can get a promotion, but when it comes down to choosing between his job and his wife, Schmidt picks Cece and tells Kim straight to her face that work will never be as important as the love he has for her. It’s another sweet moment for Schmidt and Cece, one that proves yet again thatÂ New GirlÂ has only benefited from them getting together at the end of Season 4 and marrying at the end of Season 5. Will-they-won’t-they relationships are only entertaining for so long, and theÂ New GirlÂ writers have been able to create stronger material for Schmidt and Cece since their engagement, giving them all-new sets of problems that bring them closer together rather than pushing them apart.

“Operation: Bobcat” allows most ofÂ New Girl‘s main characters (Nick has some funny moments throughout the episode, but he mostly just wanders from storyline to storyline, talking about his and Reagan’s gifts for each other) to have standout moments, whether they’re as a couple, such as Schmidt and Cece, or as an individual, like Jess. It’s not my favorite Valentine’s Day episode ofÂ New GirlÂ (I think I’d still have to give that title to Season 4’s “The Crawl”), but it certainly stands as one Season 6’s best half hours and serves as a reminder of just how good this series is at celebrating the holidays.