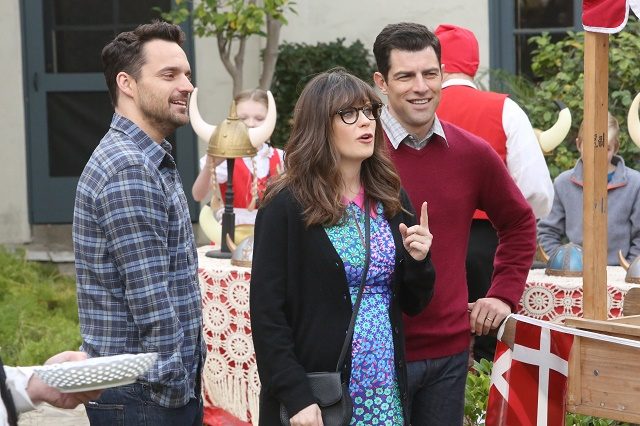 There’s a lot to love about this week’s episode ofÂ New Girl, even if half of the episode’s running time is spent on one of the most ridiculous storylines the series has ever done. I’m talking, of course, about Rhonda’s return and her forcing Winston, Aly, and Cece to help her with a major prank she’s planning in order to get her to sign her and Winston’s divorce papers. It’s so weird and stupid and over-the-top that I couldn’t help but love all of it (especially Cece’s reactions to every new, increasingly odd development). However, as fun as Rhonda pranking Winston and Aly pranking Rhonda and then Rhonda pranking Aly is, it’s not what makes “Rumspringa” such a solid episode; that all has to do with the main story of the half hour, which centers on Jess, Nick, and Schmidt.

Jess, Nick, and Schmidt’s adventure this week provides “Rumspringa” with its title, as Nick and Schmidt try to give Jess a Rumspringa of her own when she begins freaking out over her promotion to principal. Nick first recognizes how stressed Jess is when he sees her adding more sleeves to her “principal blazer,” which she claims doesn’t fit, and that’s when he enlists Schmidt’s help in planning a day of fun and relaxation that will calm Jess’s nerves and get her mind off her new job. The three of them head to an old-timey Danish fair in a small town in California, and while Jess is initially resistant to the Rumspringa, she eventually joins in on the fun, which continues until she, Nick, and Schmidt end up locked inside of a distillery cellar after the fair shuts down.

Getting locked inside a room is a trope we’ve seen countless sitcoms, includingÂ New Girl, use numerous times before, but the reason why so many shows utilize this plot device is because of how well it works, which it does again in “Rumspringa” as not only Jess and Schmidt are forced to confront their fears over their new positions (Schmidt is worried about how he’ll do as the Director of Marketing at his company), but Nick also acknowledges that he doesn’t handle certain situations in the most adult way possible. Jess is the one who really hammers this point home, calling out Nick on his somewhat childish behavior and telling him that blowing off responsibilities or trying to forget about adult problems doesn’t work anymore at their age. We’ve seen New Girl‘s characters grow and mature over the past six years, and now that they’re moving past their mid-30s, there’s no more time for excuses; theyÂ have to face whatever problems they have head-on, no matter how intimidating they might be.

The best part about Jess and Nick’s conversation in the cellar, though, is that both of them are right: Nick needs to learn that running away from your problems doesn’t fix them, but Jess also has to realize that Nick’s heart was in the right place when he came up with this idea and that having a fun day with your friends is a much better way of blowing off steam than torturing yourself with stress. It proves why the two of them are such good friends and also why they compliment each other so well in their relationship, romantic or not. The best people in your lives challenge you and make you see the world in a different way, but they also encourage you and ensure that you remember your strengths and don’t just wallow in your weaknesses.

While Jess does point out Nick’s somewhat childish methods for dealing with difficult situations, she also reminds him about how much he’s grown over the years. Hhe owns a bar and has written a novel, and he actually knows where he wants to go in life. Unlike Reagan, Jess doesn’t see Nick’s disorganized room as a problem; to her, it represents him and all his weird and wonderful traits. His room is what makes him Nick, warts and all, and Jess understands that better than anyone else and she doesn’t want to change it.

Similarly, Nick gets why Jess is stressed out more than any other member of the loft, even Cece who doesn’t play any role in this storyline at all since she’s caught in the crazy antics of Winston and Rhonda. When Nick’s initial Rumspringa plan fails, he knows exactly what to say to Jess to get her motivated and confident enough to attend her first day as principal. Nick tells her how she’s always been on a path to this moment, how she has always wanted to be a principal of a school, and now that she has achieved her goal, she’s a little scared. But as someone who has never had a path like that before in his life, Nick is incredibly excited to see what’s next for her, and his real, honest confidence in Jess beams through throughout their entire pep talk; Nick truly believes in Jess, which is also why he gives her the jacket that he bought at the fair so that she can use it as her new “principal blazer.”

Taking the next step in life, whether personally or professionally, is never easy, and there will always be something that scares or worries us. The most important thing, though, is having people in your life that can help keep you in check and remind you of how and why you can do this, people that balance out your nervousness and doubt with confidence and optimism. That’s what Nick and Jess provide for each other throughout “Rumspringa,” proving that the friends, family, and other loved ones are the constants that will always get us through uncertain times and showcasing yet again why the Jess/Nick relationship will always be the heart and soul ofÂ New Girl.

Nick and Schmidt try to help Jess relax before her first day as principal, and Winston’s wife Rhonda returns in a very entertaining episode of New Girl.