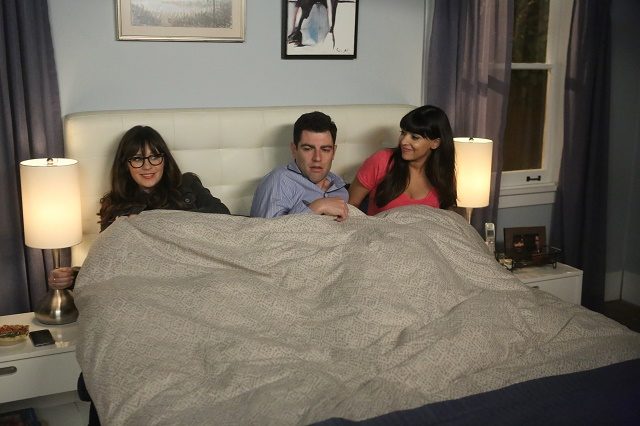 All throughoutÂ New GirlÂ Season 6 I’ve had one major complaint regarding the show: its treatment of Jess. During this season, especially the first half of it, Jess devolved into an almost unrecognizable character. There was nothing about the Season 6 version of Jessica Day that reminded me of why I fell in love with the character in the first place, and it was disappointing to see a show likeÂ New Girl, which has given its characters fantastic journeys and story arcs in its previous five seasons, reduce its lead to a punchline.

Fortunately, recent Season 6 episodes have tried to repair the damage done to Jess’s character, and while they haven’t completely rectified the situation, they have helpedÂ New GirlÂ rediscover its creative groove. That trend continues in “Socalyalcon VI,” as Jess recognizes that she has essentially become a girlfriend to both Nick and Reagan. With the help of Cece and Schmidt, who spend most of this week’s episode trying to make their new house the safest it can be, Jess realizes that she is the main reason why Nick and Reagan are still together, as she fills the emotional needs that they can’t fill for each other and helps them communicate when they would otherwise ignore their issues. It’s a realization that has been a long time coming for Jess, and fortunately, she doesn’t just bury her feelings andÂ sacrifice what she wants and needs; instead, Jess takes action by leaving Nick and Reagan to sink or swim on their own and then hopping on a plane to Portland to visit her dad.

While Jess’s confusion and sadness over this situation are tied to her feelings for Nick,Â New GirlÂ doesn’t make that the major issue of “Socalyalcon VI.” The show’s writers understand that this epiphany is entirely about Jess and her losing her sense of self and not about her romantic desires. Sure, Jess still obviously wants to be with Nick; in fact, all her efforts to keep Nick and Reagan together have just been her way of trying to make the man she loves the happiest he can be. But this identity crisis for Jess is about more than which guy she dates, andÂ New GirlÂ looks to be making a smart move by giving Jess the time and space to re-evaluate herself while she’s away from Nick and all the baggage that comes with his and Reagan’s relationship. Hopefully, the next episode or two (we’ve only got three left in this season and potentially the series) will allow Jess to do some real soul searching and self-exploration, because only when she knows who she is without Nick can she be truly be the right person for him and, more importantly, the right person for herself.

But while Jess’s trip is more about herself than it is about Nick,Â New GirlÂ is still clearly showing why the two of them belong together, cleverly using Jess’s absence in the final minutes of “Socalyalcon VI” to reinforce just how much Nick needs her. It’s no accident that Nick repeats Jess’s description ofÂ The Pepperwood ChroniclesÂ when the young girl asks him what it’s about; her influence and impact make him a better person, even when she isn’t physically there. And while Nick calls Jess, not knowing that she’s at the airport, to ask her why she left and ask her for advice, he also quickly realizes that he can’t take advantage of Jess in this way anymore. Nick even says on the phone that these are questions that Reagan should be helping him with, and while Reagan certainly won’t have the right answers like Jess does, it’s important that Nick acknowledges the boundaries between friend and girlfriend and doesn’t ask Jess to give him more than she should have to.

As long as Nick continues to show Jess that type of respect and as long as Jess can rediscover who she is on her own, there’s a very good chance that these crazy kids will find their way back to each other. Just like Cece and Schmidt in past seasons, Jess and Nick have had time to grow and mature in three seasons since their break-up, and we’ve seen both of them become, at times, the best versions of themselves. Still, though, I’d argue that as good and stable as Jess and Nick can be on their own they’re never truly at their best unless they’re together. Here’s hoping that Jess’s trip to Portland will lead the two of them to that realization.

What did everyone else think about this week’s episode ofÂ New Girl? And how would you feel if Season 6 ends up being the show’s final season? Comment below and let me know.Â

Jess stands up for herself, and Schmidt and Cece spend their first night together in their new home in a great episode of New Girl.