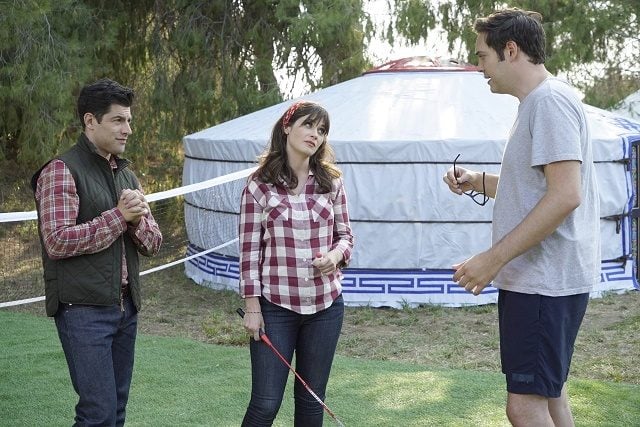 Over the past couple of seasons, theÂ New GirlÂ writers have made some odd choices when it comes to Jess and her romantic life. After Ryan’s departure near the end of Season 4, the comedy’s creative team hasn’t appeared to know exactly what comes next for its main character with regard to love. Sure, we’ve seen Jess go in some very interesting directions in her career, and in many ways, those adventures have been more entertaining and more satisfying than several of her episodic love interests. But why can’t theÂ New GirlÂ writers find Jess her own type of Reagan or Fawn Moscato, a love interest that serves as a fun distraction, even if he or she isn’t the one that Jess will ultimately end up with?

Unfortunately, this streak continues in “Single and Sufficient” with the return of Cece’s ex, Robby. Nelson Franklin has always brought his A-game whenever Robby has reappeared, since he was first introduced back in Season 2, and he’s terrific again throughout this week’sÂ New Girl. Robby remains one of the show’s most consistently funny recurring characters, and his presence isn’t the problem in “Single and Sufficient.” The issue comes from the fact that the writers believe it’s a good idea to try and pair him and Jess up without absolutely no build-up.

Aside from the fact that Robby is the founder, leader, and secretary of Jess’s new single friends group and that he plays the guitar, he seems to have absolutely nothing in common with Jess. Even when Jess and RobbyÂ first apparently feel a “spark” of sorts after they witnessÂ two of their group mates begin to hook up, there’s still nothing there. It all just feels forced, especially the scene between the two of them at the end of the episode at the cafe. All of Jess and Robby’s interactions together, including him proclaiming that he likes her in a romantic way, feel so blatantly written, a non-clever stall tacticÂ that the New GirlÂ writers crafted so that Jess would bring up her feelings for Nick again but still not have toÂ act on them in any way.

Now, maybe I’ll end up being wrong. Perhaps the end of “Single and Sufficient” won’t lead to any type of romantic relationship between Jess and Robby; maybe, instead, an entertaining friendship between the two of them will be forged, similar to the one that began back in Season 4 between Winston and Cece and transformed into something really special last season. We’ll have to wait and see, but as of right now, this development feels like another romantic mistake for Jess, just like her backsliding into a relationship with Sam last season. Here’s hoping that the New GirlÂ writers go in a different direction and end up using Robby’s character, who I very much enjoy, in a more realistic and satisfying way.

While everything involving Jess in tonight’sÂ New GirlÂ was pretty lackluster, the two other main stories, centering on Nick and his book and Winston and Aly’s reunion, worked much better. Not only did Nick’s plot, which focused on his inability to write after receiving praise from Schmidt about his book, produce one ofÂ New Girl‘s best visual gags of all-time, but it also allowed Nick to get a win for once and have him react to this success in his own Nick Miller way by freaking out about it. There wasn’t a lot of meat to this story, although Schmidt getting frustrated with Nick and encouraging him to believe in himself illustrates the strength of their friendship yet again, but it was enjoyable from start to finish.

Similarly, Winston and Aly don’t have a ton of screen time, but when they do, it’s pretty darn fun, as the two of them wipe each other out from having too much sex too quickly. It’s a simple and effective story that provides plenty of laughs (especially when we get more information on what exactly #11 involves), and at its core, it’s just about how happy Winston and Aly are to see each other again. And since Lamorne Morris and Nasim Pedrad have great chemistry together, it ensure Winston and Aly’s reunion, no matter how brief, is memorable.

After two strong installments to begin Season 6, New GirlÂ delivers an uneven episode with “Single and Sufficient.” Hopefully, the problems with Jess and Robby are indicative of things to come, and the show’s creative team can produce funnier and more inspired material for its leading lady as the season continues, especially with the much anticipatedÂ Brooklyn Nine-NineÂ crossover happening next week.

What did everyone else think about this week’s episode ofÂ New Girl? Did you enjoy it more than me? Comment below and let me know.

Jess’s new single group joins Schmidt and Cece and Winston and Aly on a couples weekend in an uneven episode of New Girl.