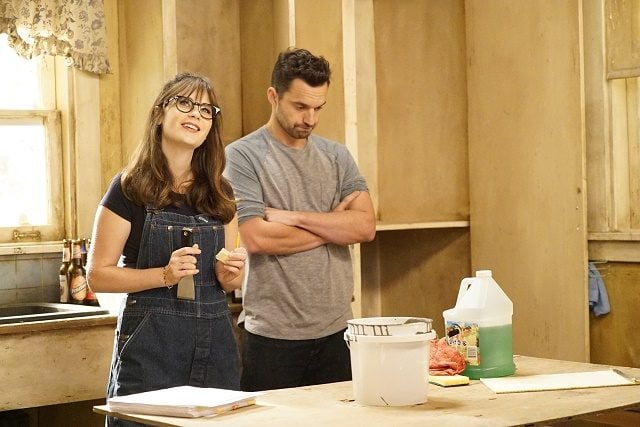 Fun is the focus of tonight’s episode ofÂ New Girl. “Jaipur Aviv” doesn’t offer a lot of emotional moments or character depth, but the jokes and antics are entertaining enough to keep you smiling and laughing throughout the 30 minutes, even if you know that the show can do better. There’s still some solid character stuff in this episode, with Jess attempting to express her feelings for Nick in a non-romantic way; however, the central story of “Jaipur Aviv” is mainly an excuse for New Girl to be its goofiest self.

So what is the main story of “Jaipur Aviv”? Well, even though the majority of the episode takes place at Schmidt and Cece’s new house and features the loft crew stripping down the walls and clearing out various rooms, it’s all just setup for the crux of the half hour: Jess and Nick deciding that Reagan should move back into the loft. The idea is brought up as Jess and Nick discuss their options for what to do with the extra room once Schmidt and Cece move out in six months. Once Jess brings up the fact that they would need another roommate to help them pay rent, Nick suggests Reagan, and they both agree that she makes the most sense, especially since she’s used to the loftmates’ idiosyncrasies and they won’t need to have the “Here’s what you need to know about Winston” conversation with her.

There’s one small issue that everyone needs to talk about, though, before Reagan can move in. Since she’ll be heading back to Los Angeles in about a month, she’ll be living with the whole gang, including Schmidt and Cece, for close to half a year, meaning that six people will be living in the loft at one time, which goes against a rule that the roommates had all agreed upon in the past. Therefore, the five of them need to vote on the matter, which leads to many moments that show off New Girl‘s signature brand of weird and wacky humor, as one of Schmidt’s requirements for voting “yes” is that Nick lets him buy him a pair of jeans, while Winston wants both NickÂ and Reagan to spend a certain amount of time with Ferguson every week so that he can get exposed to couples that aren’t mixed race (Jess later refers to it as the “Ferguson Bishop White Immersion Program”).

Although lots of comedy spawns from the Reagan situation, some drama comes from it as well. The public problem with her moving in is that six people will be living in the loft at the same time, but the unspoken tension here comes from Jess’s feelings for Nick. While Jess seems a little hesitant at the idea of Reagan moving in at first, once Nick starts to perk up about it, envisioning how it would work and how good it could be for them as a couple, she bends. As Jess explains to Cece in the episode’s best scene, she can’t express her feelings toward Nick in a romantic way right now, but she can still express them through their friendship. She sees how happy the possibility of Reagan moving in makes him, and that’s all that matters to her. To Jess, Nick’s happiness is more important than any uncomfortable situations this new arrangement might cause for her, and that selflessness Â illustrates yet again how much she cares for Nick and why they’re ultimately a great match for each other, despite their dysfunctional history.

Speaking of dysfunction, Schmidt and Cece learn how to deal with theirÂ veryÂ different opinions on interior design in tonight’s New Girl in a sweet scene in which Cece shows her husband the importance of compromise. “I just want you to feel included, even if it’s just in some small, symbolic way,” Cece tells Schmidt, and he responds to her words with action, purchasing and installing the “La Cucaracha” doorbell that she wanted for their house. Throughout last season and these first five episodes of Season 6, New Girl has done a terrific job at creating natural and realistic conflicts between Schmidt and Cece. At this point in the show’s run, we know that they (hopefully) won’t be breaking up, but it’s still fun to watch them clash a little every now and then, even if the stakes appear much lower than before.

And really, “Jaipur Aviv” is a very low-stakes episode of New Girl. Aside from Jess’s inner turmoil, the biggest conflicts throughout the half hour involve Schmidt and Cece disagreeing over paint, and Nick and Winston trying to find out whether or not their friends’ new home was the setting of a porn film that Winston has watched more than few times. Not every episode can hit the emotional heights of the Season 6 premiere or even last week’s mini crossover withÂ Brooklyn Nine-Nine, and it shouldn’t have to. Sometimes, being a fun half hour of television is enough, and tonight’s New Girl certainly succeeded in being that.

What did everyone else think about tonight’s episode ofÂ New Girl? Comment below and let me know.

Jess leads a vote to have Reagan move back into the loft in an entertaining episode of New Girl.