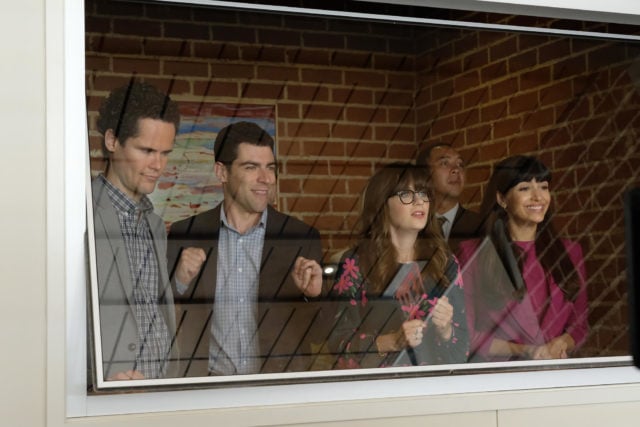 Most of New Girl‘s best episodes dive into the past of the show’s characters to further their stories in the present and, potentially, the future. The loft gang is a group of friends that has been in each other life’s for a long period of time; Jess and Cece have been around Nick, Schmidt, and Winston for nearly a decade, and their relationships with the guys are on the shorter end of the spectrum compared to the friendships that the three men have had with each other, as Nick and Schmidt have been best friends since freshman year of college and Nick and Winston have known each other since they were kids growing up in Chicago. And after two episodes that leaned heavily on the Nick and Schmidt friendship, especially the season premiere,Â New GirlÂ Season 7 gives the bond between Nick and Winston its due in “Lilypads,” as the two friends help each other push past their fears in some wonderfully hilarious ways. Meanwhile, Jess and Schmidt’s personalities clash when he and Cece ask her to be Ruth’s tutor so that she has a better chance of getting into the most prestigious preschool in the area, Lilypads.

There’s a lot to love about both storylines in this week’sÂ New Girl. The inner turmoil that Nick and Winston are dealing with feels like a classic, early-seasonÂ New GirlÂ story, back when the series would take the simplest, goofiest idea possible and spin it into a more emotionally powerful examination of one, or in this case, two characters. In “Lilypads,” the Nick-and-Winston plot centers on the former’s tendency to procrastinate and the latter’s fear of public speaking, and the show somehow ties this conflicts into a hysterical flashback of January 2001, when Nick traveled across the country to surprise Winston by visiting him at college, only to open the door to find his friend sitting in front of the computer about to masturbate. Nearly two decades later, Winston still claims that he was not doing anything of the sort; as Nick and he act out a courtroom scene to help Winston prepare to take the stand for a case he was a detective on, Winston continues to deny, deny, deny, and in the process, he points out that Nick only hitchhiked eight hours across the country to visit him as a way to procrastinate from studying for his exam.

Winston calls out Nick’s penchant for procrastination but goes even further when he deciphers the root of this behavior: Nick always puts important things off and looks for distractions from them because he doesn’t believe he’ll succeed. Underneath all of Nick’s bragging about his writing and his self-deprecating sense of humor is a scared, self-conscious individual, who, as we saw in last week’s episode as well, needs his best friends’ encouragement in order to believe that he can be something more, in order to accomplish the goals he has set out for himself. That’s what makes Nick’s words to Winston near the end of the episode so sweet and genuine. He tells his oldest friend that he doesn’t know what his life would be like if he hadn’t met him because Winston has always pushed him to do more, to be better, and then he’s able to reciprocate that favor by helping Winston break through his nervous-talking barrier and having him finally admit the truth about January 2001: Winston did indeed intend to pleasure himself before Nick arrived.Â This outrageous, ridiculously funny step forward for Winston appears to be enough to get him over his public-speaking hump, and he and Nick celebrate their friendship by sharing one, simple word back and forth: “Chicago.”

In the episode’s other major storyline, Jess and Schmidt also come to a realization together, after spending the majority of the episode debating how best to tutor Ruth. Their educational philosophies conflict, as Jess allows Ruth to be more imaginative and free-thinking while Schmidt insists on a more rigorous structure of learning. However, by the end of the hour, after Ruth’s intelligence and creativity leads to a preschool uprising that results in Schmidt’s rival, Benjamin, having a pair of scissors thrown in his face and the Lilypads teacher having a piccolo stuck somewhere inside of her body, the two friends, along with Cece, understand that Ruth’s just going to be Ruth and that’s the best thing about her.

Throughout “Lilypads,” we see that Schmidt and Cece have raised a daughter that won’t let anyone else’s ideas define her, and this development of Ruth transforms her from an adorable tool that the writers can insert into any plot they want into a legitimate character. Ruth makes her own rules in her own world and doesn’t apologize for doing so, illustrating how wildly inventive and independent she truly is, from cutting the perfect circle and imagining it’s a moon to calling the color green (and any person she wants) “Denise.” These strong qualities more so than Ruth’s appearance or her name are what make it clear that she’s Schmidt and Cece’s child. Just like her parents, she’s an undefinable ball of energy that will almost always surprise you. Ruth’s funny, fierce, and compassionate, and whichever kids she befriends on the playground at the Turtles preschool are going to be just as lucky to have her in their lives as Jess, Nick, and Winston have been to have Schmidt and Cece in theirs.

Schmidt and Jess clash over how to best prepare Ruth for preschool, and Nick and Winston push each other to face their fears in a stellar episode of New Girl.