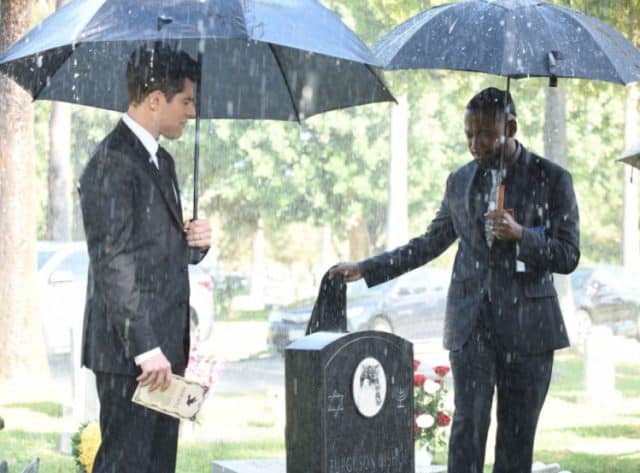 Since his first appearance back inÂ New GirlÂ Season 3, Furguson Bishop has been one of the show’s most entertaining characters, and his wacky and wonderful bond with Winston has been a consistent source of laughter as Winston viewed his cat not just as a pet but, in many ways, as a brother and son.Â  That connection between the two of them has always been more than a little weird because, for the past several seasons, Winston has been the strangest ofÂ New Girl‘s major players, and that weirdness has, understandably, been mined for humor. In “Where the Road Goes,” Winston is still dealing with the loss of Furguson a year after his death, as he has his friends come together for a memorial for him, and while this whole ceremony is mostly played for laughs, it also provides us with an opportunity to more deeply explore some of the show’s core relationships, such as the friendship between Nick and Coach and the romances between Nick and Jess and Schmidt and Cece.

It’s always a pleasure to have Damon Wayans Jr. return toÂ New Girl; the comedic energy he brings to the role of Coach is unmatched. However, in “Where the Road Goes,” things are a little tenser for Coach than they have been in his other trips back to Los Angeles, and that’s because he not only owes Nick $71,000 but also because he hasn’t spoken to his friend in nearly three years. Losing touch with friends is, unfortunately, a common occurrence in most peoples’ lives; as you get older, you all head in different directions, both figuratively and, in the case of Nick and Coach, literally, and the immediacy of the people and places around you distract you from the connections you have elsewhere, no matter how special they are.

It’s understandable that Nick and Coach’s friendship could slowly dissipate over the years, but we learn that it’s not simply a matter of life getting in the way. Instead, it’s Coach’s embarrassment over losing the money that Nick loaned him, which he invested in a restaurant that quickly floundered, that caused the friends’ estrangement. Coach felt so bad about what happened that he hasn’t been able to muster up the courage to talk with Nick like he used to, so ignoring seems like the only option. Again, this development is extremely relatable; how many times have you or a friend of yours hid away from a potential problem instead of confronting it because you were scared of how another friend would react? Like all best friends would and should, though, Nick waves away Coach’s concerns, insisting that the money has never been the problem; he just wants his friend back, and within an instant, the two of them return to their own ways, laughing about a story involving Nick’s rug-burned penis, which they hilariously and grossly refer to as “grilled shrimp.” The exchange perfectly captures the essence of a long friendship like the one that Nick and Coach have. Things like money and time are never legitimate problems because of the deep history you share together.

That idea is similar to the sentiment that Nick and Jess express to each other after she confesses to him that she might have accidentally killed Furguson (spoiler alert: she did not–he had a heart attack). Nick keeps sharing embarrassing admission after embarrassing admission with Jess, because he believes she doesn’t keep anything from him before eventually admitting that he never told her about lending Coach money because his lack of responsibility when it came to his finances is part of the reason why they broke up before. He was worried that if he told her the truth about it, it would scare her off, but Jess tells him that he doesn’t need to worry about that ever happening again–she loves him for him, and the feeling is mutual, as Nick tells Jess that there’s nothing she could ever do that would cause him to stop loving her. It’s a small but important moment in this week’s episode, because it’sÂ New GirlÂ illustrating how much these two characters have grown as individuals but, more importantly, as a couple. The Nick and Jess of Season 3 would never have been able to talk as openly and calmly as Nick and Jess do in “Where the Road Goes.” However, both of them have matured and learned to accept each other’s flaws, loving each other for them instead of in spite of them.

It’s comparable to the growth made by both Schmidt and Cece duringÂ New Girl‘s third and fourth seasons before the two of them finally got engaged. However, now as a married couple, they have much larger problems to consider, which is why Schmidt spirals and asks Cece how long she would wait to get remarried if he suddenly died. It’s Schmidt’s classic neurotic nature in full-effect, and while it doesn’t lead to any groundbreaking revelations for him and Cece, it does result in a sweet moment in which the two of them reaffirm their love for each other. Plus, Schmidt shows that Cece’s happiness means more to him than anything else, which is why he would want her to find someone else to grow old with if he were actually gone, and it illustrates just how much Schmidt has evolved duringÂ New Girl‘s six-plus seasons. He’s transformed from the selfish, arrogant douchebag of Season 1 to a happily married father, who can sacrifice his own ego for the fulfillment of those he loves. Again, this isn’t new ground thatÂ New GirlÂ is exploring, but it serves as a nice reminder of the journeys we’ve been on with these characters as we prepare for the series’ final four episodes.

What did everyone else think of this week’s episode ofÂ New Girl? Comment below and let me know.

Coach returns as everyone comes together to celebrate the life of Furguson in an entertaining and surprisingly emotional New Girl.