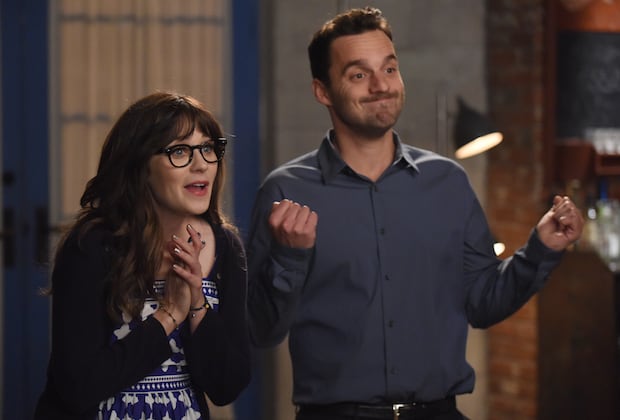 Like most of this final season of New Girl, “Godparents” and “Mario” are uneven but satisfying. While neither episode is as funny and sharp as the FOX sitcom at its best, they both feature solid emotional moments, one of which is easily the biggest highlight of Season 7 so far. Obviously, I’m talking about Nick’s proposal to Jess, which has been a long time coming, much longer than the month it’s been since the Season 7 opener. However, before we dive into that proposal, let’s touch on a few of the other touching storylines that can be found throughout “Godparents” and “Mario.”

All three of these key moments have to do with parenthood in one way or another, which makes sense given how much older and more mature the characters onÂ New GirlÂ are now. Winston worries that he won’t be able to be a good father to his and Aly’s unborn child since he’s never gotten to know his own dad, while Schmidt and Cece debate whether or not they should have another baby given how they both behaved while Cece was pregnant with Ruth. The Winston storyline has Jess reuniting her former roommate with whom she believes is his father before she learns from Aly that the man she met is actually a totally different person with the same name as Winston’s father, a mix-up that initially causes Winston to fully crack under the pressures of parenthood before Jess steps in to encourage him. She tells him that he’s more prepared to be a dad than anyone else she knows, even more prepared than Schmidt was when Ruth came along; she knows that Winston will have good days and bad days as he and Aly raise their child together because every parent does–he doesn’t need to know his father in order to be a good one.

Given how complicated most ofÂ New Girl‘s characters’ relationships with their parents are, especially with their fathers (look at Nick’s connection with his con-man dad or Schmidt constantly being disappointed by his father), these comments from Jess carry more weight than simple words of kindness. All Winston has to do is look at how good of a father Schmidt has been to Ruth, despite his own dad being largely absent from his own life after his parents’ divorce, such a good father in fact that he wants to leave his job to be stay-at-home dad for good. Or he can focus on Jess’s belief that Nick will be a solid parent one day to their future kids, even with all of his past immaturity issues. The fears Winston have are common, and that’s why it’s important for him to take a moment and realize that these concerns should cripple him.

Similarly, Schmidt and Cece’s concerns over the people they turned into during her pregnancy with Ruth three years ago should not prevent them from trying to have another child. As Aly showcases through the video footage on her phone, Cece and Schmidt were unbearable in different ways; she became a mean, bossy tyrant, and he became an overbearing wimp that catered to her every need. They didn’t keep each other in check when one of them was behaving ridiculously, which is hallmark of the Schmidt/Cece relationship, especially when it comes to Schmidt’s behavior in the past. They just need to keep that balance in mind when having a baby together next time, the same focus on balance that has allowed for Cece to become an insanely successful businesswoman and mother and Schmidt to transform into the best stay-at-home dad possible.

In fact, as “Godparents” shows, Schmidt has evolved so much over the years that he’s willing to leave his sales job, a position that served as his sole identify for so long, behind in order to spend time for his daughter. Schmidt doesn’t just love Ruth; he loves being her dad, more than pitching ideas about salsa to Japanese businessmen or landing any new account. He’s come a long way from the guy in Season 2, who couldn’t pull himself away from work for long enough to make things right with Cece and prove to her that he was someone she could marry and have children with in the future. You got to love character development.

Which, speaking of character development, brings us to Jess and Nick, easily two ofÂ New Girl‘s most changed characters from the show’s pilot. Some of those changes are simply because the creative team wanted to go in different directions (hence why Jess’s quirky behavior became more and more toned down as the series continued), but most of these developments have occurred on screen because they’re the logical next steps for these characters. Nick, in particular, has transformed from an angry, unreliable goof to a decisive, successful author, who can financially and, more importantly, emotionally support Jessica Day. Meanwhile, while Jess has found career success in virtually every season ofÂ New Girl, bouncing back and forth from different schools to now helping to lead Russell’s organization, she has constantly struggled to find romantic happiness. Even when she wasn’t admitting out loud to herself, Nick has always been in the back of her head and heart, even as she tried dating everyone from Ryan to Sam again to Robby, and that’s why it’s fitting that his proposal to her is set to the background of one of their first moments together.

As Nick gets down on one knee in the park, after he and Jess chase after Mario, the new dog they end up adopting, an ’80s movie screening plays in the background. And what’s on the screen?Â Dirty Dancing“Time of My Life”, of course, as plays immediately after Jess says yes to Nick popping the question.Â “It’s always been us,” Jess tells Nick, reaffirming what I said above and have said in so manyÂ New GirlÂ reviews before. Whether you like them as a couple or not, Jess Day and Nick Miller have always been the beating heart of this hangout comedy, and it’s fitting that this final season is wrapping up by focusing on their relationship, as the two of them take this next big step together, another sign of how far they as characters andÂ New GirlÂ as a series have come since that adorkable girl showed up at the loft, needing a place to live.

What did everyone else think about these episodes ofÂ New Girl? What are you hoping to see in the series finale? Comment below and let me know.

Winston worries about what type of father he will be, and Jess and Nick take a major step together in their relationship in two satisfying episodes of New Girl.