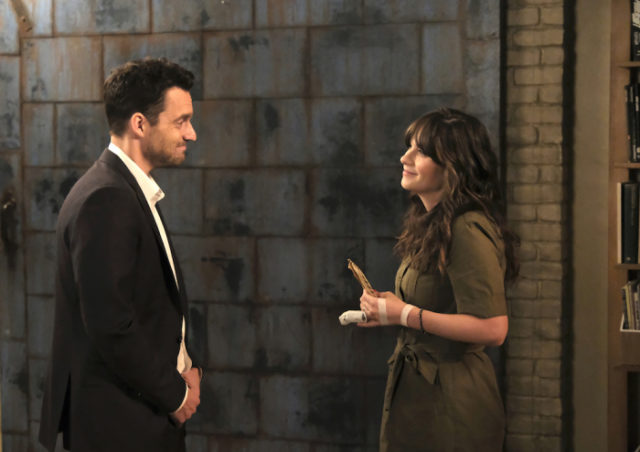 It’s been a little over a year since we watched the elevator close as Nick and Jess kissed, the two of them finally getting back together after multiple seasons apart. But in New Girl‘s universe, it’s been even longer. In fact, as tonight’s premiere title suggests, it’s been around three years since we last saw Jess, Nick, and the rest of the loft gang. During that time, Jess has accompanied Nick as he continues to promote newÂ PepperwoodÂ installments on book tours across the world, Schmidt and Cece have raised their now three-year-old daughter, Ruth (and Schmidt has grown a hilariously hideous mustache, but more on that later), and Winston has married Aly, who is now pregnant with their first child. Throughout the fifth and sixth seasons ofÂ New Girl, the show’s charactersÂ really began to mature in important ways, perhaps none more so than Nick, and now, here at the beginning of Season 7, all of them have entered full-blown adulthood with new kids, new houses, and the possibility of new jobs. Only Jess and Nick remain in the loft, the last two roommates clinging to some semblance of the past even as the future refuses to slow up for them.

And the future does feel a tad bit rushed and overwhelming throughout this opening half hour ofÂ New Girl‘s final season. Similar toÂ Parks and Rec, which also did a three-year time jump before its farewell season began, the series gets a little bogged down in the early-going by having to redefine the status quo. In less than 10 minutes, we are bombarded with information about our favorite characters’ new relationship statuses, living arrangements, and even facial additions (Jess’s nose ring doesn’t get as much attention or laughs as Schmidt’s mustache, but I’m not a fan of either of them). We spend so much time playing catch-up that there’s hardly a moment to breathe and soak in small but wonderful comedic bits like the magician shockingly dying at Ruth’s first birthday party, Jess referencing that she once dated her cousin, aka Robby, or Aly calling Winston “Snail Eyes.”

Still, though, even when eliminating those terrific scenes, there are plenty of laugh-out-loud moments throughout “About Three Years Later,” the majority of them unsurprisingly coming from the performances of Jake Johnson and Max Greenfield. Everything having to do with Nick detesting Schmidt’s mustache is comedy gold. There’s Nick’s yelling proclamation that he would have never let his best friend grow it if he had been around, the incredible way Schmidt pronounces the word “mustache,” and the intentionally intimate shaving scene at the end of the half hour, a ceremony that Schmidt only allows after Nick tells him that he misses his upper lip. Despite all the superb romancesÂ New GirlÂ now features in Season 7, Nick and Schmidt remain one of the comedy’s very best love stories.

But the best-friend duo are forced to be second fiddle in “About Three Years Later,” because if there’s a main story that drives this premiere forward, it’s not Aly coming to grips with her pregnancy, although watching her and Winston navigate parenthood should be a ton of fun. No, the main storyline of tonight’sÂ New GirlÂ premiere focuses on Jess and Nick, who have been happily dating for the past three years but are still not yet engaged. Everyone, from Cece to Winston to even Fancyman himself, Russell (returning guest star Demort Mulroney), is surprised to see that Nick still hasn’t proposed to Jess, even after their trip to Europe. Most of the characters, including Jess, believe it’s because Nick doesn’t feel completely ready to take that next step yet, and Jess even goes as far as to tell Nick that the two of them don’t need to get married in one of the premiere’s final scenes. But the immature, emotionally stunted Nick Miller of old is gone. Only the truly romantic Nick Miller remains, which is why he’s not delaying his proposal to Jess because he’s afraid; no, he’s delaying it because he wants it to be worthy of their 10-year, up-and-down journey together. He wants it to take place not in France or Italy or Turkey but in the loft, where they first met and everything began. He wants his proposal to Jess to be perfect because he loves her now and, as he repeats to Bob Day on the phone when he has to ask for Jess’s hand in marriage again, he’ll keep loving her forever.

During that phone call with Nick, Bob gives his potential son-in-law a one-month deadline to pop the question to Jess, and even though this final season forÂ New GirlÂ is only an abbreviated eight episodes long, I don’t think we’ll have to wait too many weeks before we see Nick finally propose. Will their wedding take place in the series finale? Will it happen before that? It remains to be seen. But one thing is for sure: Jessica Day and Nicholas Miller, whether romantically together or not, have been the beating, thumping heart ofÂ New GirlÂ since its first season. It only feels right that this show’s journey should end by focusing on the two of them. I can’t wait to see how this final chapter in one of my favorite sitcoms of all-time unfolds. Bring on next week’s episode!

What did you think ofÂ New Girl‘s Season 7 premiere, and what are your hopes for this final season as a whole? Comment below and let me know.

Jess, Nick, and the rest of the loft gang reunite at Schmidt and Cece’s daughter’s birthday party in an uneven but entertaining New Girl premiere.