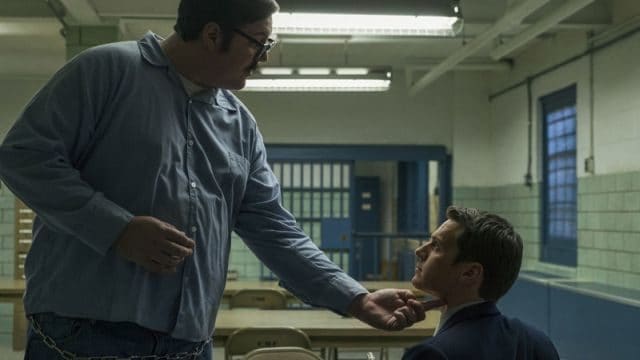 If you’re going to go hunting crazy people you’d best check your sanity at the door and secure your firearm to your hip. Mindhunter is already looking like it might be the next masterpiece to come out and it’s not even here yet. Entering the mind of a psychopath is, I would imagine, much like entering a store in which the food looks appetizing and fresh but is rotten inside, and there’s an especially wide drain in the floor that can accept just about anything that might fall down it. Disturbing yet? That’s not even the start.

The ages-old issue of what to do with psychopaths and how to spot them has been a problem for law enforcement for so long that the methods used to deal with them have changed rapidly from one decade to the next. How do you deal with a crazy person that refused to acknowledge that there’s anything wrong with them?

Mindhunter doesn’t come out until October but already it’s starting to look like something that might pique the interest of many a viewer. Set in the year 1979 it follows two FBI agents that are assigned to teach cops how to think like agents in the recognition and apprehension of some of the worst killers and psychopaths that have ever been imagined. The only problem with this is that they have to be the ones to understand the mind of a killer, and not be corrupted in turn.

You know the old saying, when hunting monsters take care not to become one? This seems to stretch that adage to the limit. The FBI agents must come to understand the innermost workings of the minds of those inmates and violent offenders that they are trying to teach police officers about. In short they’re opening the door to madness so that they might report back what they find. It seems a very ill-fated attempt at gaining access to a level of chaos that could break nearly anyone without much effort, but it’s also an important teaching method that could possibly allow police to better understand the mind of a serial killer or worse.

But it seems like it would be something just simply horrendous to have to listen to as the killers decided to regale each agent with the stories of their kills and how they defiled their victims whether alive or dead. It might be easy to shut some of it out and focus upon the biological aspects but the sheer depravity of the acts seems akin to lying down with someone you know has a deadly virus and hoping it won’t make the jump from them to you. Madness is not so much a virus as it is a state of mind, but it is still infectious, and it can still be passed along if one isn’t careful.

Having to speak to such human beings is a task that would be unenviable of any person, but having to sit there and try to understand them would be even worse.

Be wary of speaking to monsters, lest you become one.