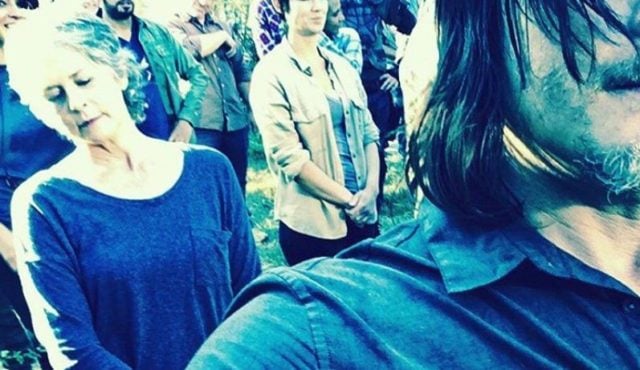 One of the shows that would most largely be affected by the looming writer’s strike is The Walking Dead.Â  However, that didn’t stop Norman Reedus from taking a pseudo selfie of Melissa McBride.Â  It would appear that the cast and crew have taken over Georgia to potentially beginning shooting the “All out War” season 8 of the AMC hit show.Â Â  ReedusÂ shared a photo of himself with Melissa McBride on set of the AMC series. The photo, embedded below, is likely from production of the Season 7 finale, seeing as Gale Anne Hurd’sÂ Twitter indicates that the group was only just getting back together the same day this photo was posted.

However, the whole “Ahem” caption is what people are talking about.Â  Does it refer to the possibility that season 8 is on schedule as we’re hoping for?Â  Or does it refer to McBride checking out what appears to be Reedus’s butt?Â  Actual photos for season 8 wouldn’t likely be released until the mid-summer assuming The Walking Dead follows the course it usually does.

But remember this.Â  Reedus has actually posted pictures of future episodes in past Instagram updates which he’s had to take down.Â  So yeah, I have no idea what’s really going on here either.