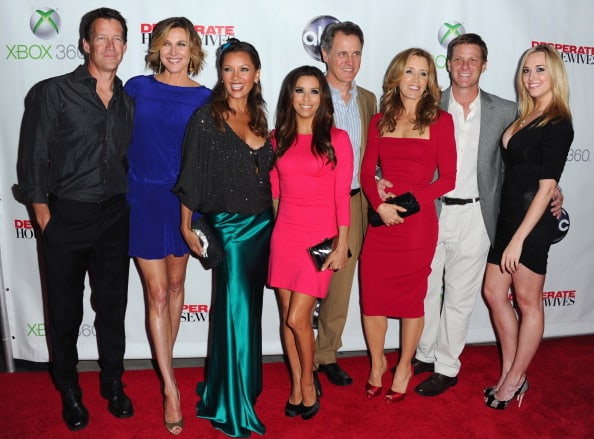 It has been almost three years since the ABC dramaÂ Desperate HousewivesÂ ended its 8 year run. The show started out hot and became one of the most popular shows of the 2004-2005 season. Then came the second season backlash and a crazy storyline involving a woman locking her son in a basement. The series would be rated as one of the 20 most watched show for the first six seasons it was on the air (reaching as high as 4th during the first and second season) and would rate as number 37 during its final year on television. Â Viewers were treated to a grocery store shooting, a tornado destroying the neighborhood, and so many deaths you began to wonder why anyone would want to live on Wisteria Lane. Â By the time season 8 had arrived, most of the fans had already given up on the show. So what have the housewives been up to since the show concluded in 2012? Take a look below and find out:

Teri Hatcher’s career had become pretty dormant in between her stint onÂ Lois and Clark: The Adventures of SupermanÂ and obtaining the role of Susan Mayer onÂ Desperate Housewives.Â She scored a Golden Globe and a Screen Actor’s Guild Award for her work on the series. Since the show concluded, Hatcher has been doing a lot of voice over work in feature films. She provided the voice of Dottie in the 2013 animated filmÂ PlanesÂ as well as the 2014 sequel. She has also voiced Beatrice Le Beak on the animated series Jake and the Never Land Pirates.Â Hatcher will star in the 2015 romantic comedyÂ SundownÂ starring Camilla Belle and Sara Paxton.

2004 was a great year for Felicity Huffman. That was the year theÂ Sports NightÂ actress began starring as Lynette Scavo onÂ Desperate Housewives.Â It was also the year she filmed the movieÂ Transgender,Â a role for which she was nominated for an Academy Award. Huffman also was nominated for her work onÂ Desperate Housewives.Â When the series ended, Huffman starred on the stage in the playÂ November.Â She also appeared in the comedyÂ Trust MeÂ alongside Clark Gregg and Allison Janney. This month, you can see her in the Oscar contender filmÂ Cake,Â which stars Jennifer Aniston. Additionally, Huffman will appear in the television seriesÂ America CrimeÂ that will premiere in March.

Before starring as the adulterous Gabrielle Solis onÂ Desperate Housewives,Â Eva Longoria got her big break on television starring as Isabella onÂ The Young and the Restless.Â Since the series concluded in 2012, Longoria has been busy working both in front of and behind the camera. She lent her voice to the animated comedy seriesÂ Mother Up!Â in 2013 and has guest starred on many shows includingÂ The SimpsonsÂ andÂ Brooklyn Nine-Nine.Â Longoria is the producer and director of the Lifetime seriesÂ Devious Maids,Â which will air its third season later this year. Other producing credits for Longoria include the documentaryÂ Food ChainsÂ and the television dramaÂ Trust.

Marcia Cross appeared in countless television shows before playing the role of Bree Van De Kamp onÂ Desperate Housewives.Â She could be seen as Dr. Kimberly Shaw onÂ Melrose Place,Â Topanga’s mother onÂ Boy Meets World,Â and Dr. Linda Abbott onÂ Everwood.Â Cross has been busy raising her twins Eden and Savannah, whom she gave birth to in 2007. In 2014, she has worked onÂ the television movieÂ FatrickÂ and is the narrator of the documentaryÂ All the Way to the OceanÂ that discusses the dangers of littering.

Brenda Strong was the beloved narrator for all eight seasons ofÂ Desperate Housewives.Â Though she was rarely shown on screen, her character still played a pivotal role to many plots on the series. Once the dramaÂ concluded, Strong made two appearances on the ABC hit dramaÂ ScandalÂ as Joan Reston.Â Strong would once again narrate a series in 2012. The show is calledÂ Blood RelativesÂ and its fourth season is slated to premiere this year. Strong has also been busy on screen. She starred on theÂ DallasÂ reboot, alongside Desperate Hpusewives’ alumni Jesse Metcalfe and Josh Henderson,Â as Ann Ewing. The series was recently cancelled, but still could be renewed.

Ricardo Chavira was known for his roles onÂ Six Feet UnderÂ andÂ JAGÂ before scoring the role of Carlos Solis onÂ Desperate Housewives.Â After the series concluded in 2012, Chavira made guest star appearances on cable dramasÂ Burn NoticeÂ andÂ Warehouse 13.Â In 2013, Chavira landed a starring role on the NBC comedyÂ Welcome to the Family,Â which was one of the first series to be cancelled for the 2013-2014 television season. Chavira’s Housewives’ costar Eva Longoria even made an appearance on the series before it was axed. In 2014, Chavira appeared on two episodes ofÂ Bad TeacherÂ as Tico.

James Denton has kept himself pretty busy after being killed off on the final season ofÂ Desperate HousewivesÂ in 2012. That same year the actor made an appearance on the comedyÂ Hot in ClevelandÂ and appeared in the romantic comedyÂ Karaoke Man.Â In 2013, Denton appeared in the musical drama GraceÂ Unplugged,Â which featured AJ Michalka as the title character. Denton was featured in the 2014 filmÂ Stranded in Paradise.Â You may have seen him in the UP Television MovieÂ A Girl’s Best FriendÂ that premiered recently. He will be in the Hallmark Channel original seriesÂ The Good WitchÂ with Catherine Bell and Chris Potter that is due out later this year.

Doug Savant spent five season playing Matt Fielding onÂ Melrose PlaceÂ and appeared in many television shows includingÂ JAG, According to Jim, NYPD Blue,Â andÂ 24Â before he began playing Tom Scavo onÂ Desperate HousewivesÂ in 2004. Like hisÂ HousewivesÂ co-star, Savant appeared in a 2012 episode of the comedyÂ Hot in Cleveland.Â Savant has continued to work on television since the conclusion of Desperate Housewives.Â He has guest starred onÂ Criminal Minds, Drop Dead Diva, Vegas,Â andÂ Rizzoli & Isles.Â You may have just caught him on a recent episode ofÂ Hawaii Five-OÂ as well.

Who was your favorite character onÂ Desperate Housewives?Â Let us know in the comments section below.