Home
Game of Thrones
There are Now Two of Them: Darth Maul Vs. Darth Maul Alola Form 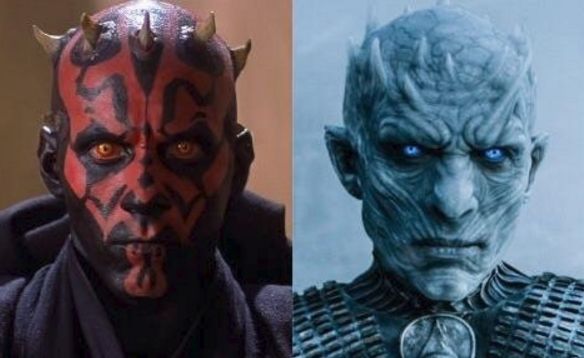 The similarities are quite stunning really. It’s almost as if Darth Maul’s visage was somehow morphed into a wrinkled, blue-eyed demon while his cranial horns were somehow pulled down and then turned up towards the top of his head. Of course the two aren’t the same but the overwhelming likeness is pretty interesting.

But who would win if it came down to a fight. Oh come on now, everyone has surely been wondering this if they’ve seen the picture. After all you’ve got a Sith lord and the Night King, both of whom are powerful in their own right and both who’ve proven that they are not above destroying anything that gets in their way. The fight between these two might not quite be epic status but it would certainly be something to watch.

It would not be a one on one battle, as this is not the manner in which the Night King fights. His legions of undead would crowd the battlefield and press Maul from the beginning, forcing him to defend himself on all fronts as he sought to fight his way towards the Night King. The White Walkers would no doubt refrain from battle as well considering that if they fall a good portion of the army might fall.

Still, Maul’s savagery, his combat expertise, and his lightsaber mastery would be more than enough to allow him to prevail against many of the creatures as he stalked the Night King like a sand panther waiting for the right moment. Being able to wield telekinetic abilities Maul would be able to flatten a good portion of the army and then dice apart the rest. In short the Night King’s numbers wouldn’t mean much against a determined Sith lord that knows the way of battle.

Once Maul reached the Night King’s periphery he would be met by the White Walkers, who would show him no mercy and would receive none either. Maul would likely carve through them without fail, killing them and thus decimating whatever was left of the army as they fell to pieces. And then only the Night King would remain.

Not much is known about the Night King’s battle prowess at this point, but his weapons are absolutely lethal as it’s been shown already. He would very likely put up a good fight and acquit himself well, but in the end the Night King is no Jedi, and he is no Sith. Should he get lucky he could mortally injure Maul, but as we’ve seen when the battle haze drops over him, Maul is one of the most relentless opponents ever imagined. The Night King would fall, and the victory over the dead would be Maul’s.

But that’s one opinion.

Another is a little more realistic as it sees Maul either going down beneath the sea of undead no matter how hard he fights. And yet another is a call to remember that the Night King now has a dragon, and does not waste his efforts on what might be considered small matters. In the realistic version Maul would never touch the Night King, and would die very badly.

But again, that’s all a matter of opinion.