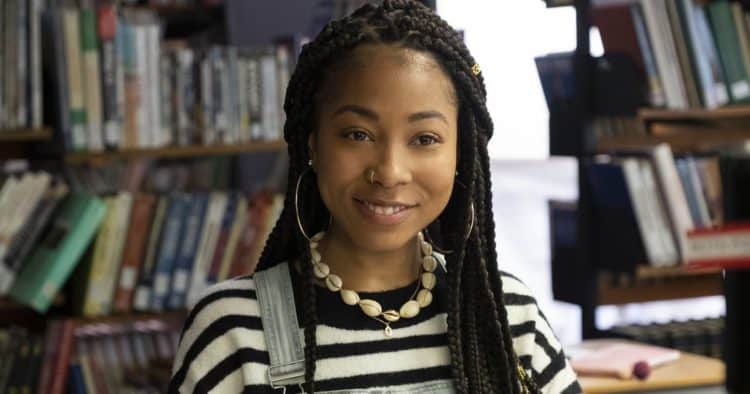 Newcomer Odley Jean has gone from being completely unknown to being on everyone’s hottest rising stars list in just a matter of weeks. Her debut performance as Dominique Pierre in the new Netflix series Grand Army has left people completely stunned – in the best way possible. Even though the show marks her first ever on screen appearance, it’s impossible to tell by watching her. As soon as she steps in front of the camera, she has the confidence of someone who has been acting for decades. With a very solid performance on her resume, it wouldn’t be surprising if this role led to lots of other opportunities for the young actress. Keep reading for 10 things you didn’t know about Odley Jean.

1. She Is Studying Social Work

There’s nothing better than having options and acting isn’t the only one Odley has when it comes to her career path. She is currently a student at Nassau County Community College where she is in the progress of earning a degree in social work. She is also an intern at a local women’s center.

2. She Isn’t Actually A Teenager

Odley’s character in Grand Army is a high school student, but in real life Odley is already past that point in her life. She is actually 22, however, her youthful look made her the perfect fit for the role. Plus, since it hasn’t been too long since her own high school days, she could still find a way to connect with the things her character was going through.

3. She Has A Lot Of Things In Common With Her Character

Dom’s character wasn’t based on Odley, but they have a surprising number of things in common. Like Dom, Odley is a first generation Haitian American who has experience dealing with the expectations placed on her by her parents. She is also a Brooklyn native who is passionate about helping her community.

4. She Cried The First Time She Read The Grand Army Script

Most actors have said that a great script is one of the biggest things they look for when deciding on a role and it looks like Odley would agree. When talking about the script for Grand Army Odley told Refinery 29, “The first time I read it, I cried.” She was simply moved by the power of the story being told and also felt that it was something many young people would be able to relate to.

5. She Fell In Love With Acting In Elementary School

Odley has known she wanted to act from a very early age. She fell in love with the craft after participating in a play in elementary school. Still, her path to actually becoming an actress wasn’t a straight and narrow one. Her mother wanted Odley to become a nurse and for a while Odley considered it. However, she ultimately decided that acting was something she wanted to pursue seriously.

Even though Odley was born at the tail end of the 90s, she still has a special place in her heart for the decade’s fashion trends. During an interview with Who What Wear she said, “I am such a huge ’90s geek. I love baggy jeans. I love baggy sweaters. I am more of a comfort dresser, but at the same time, I could go boho. I just love oversize stuff. ”

7. She’s A Strong Advocate For The Importance Of Mental Health

Just like Dom, Odley understands the importance of prioritizing mental health. Even though it’s not always an easy thing to do, she has made it a point to be mindful of her mental health and be sure that she isn’t overwhelming herself by taking on too many committments and trying to live up to other people’s expectations.

In addition to being a budding star, Odley is also a fan. One of her favorite shows is the HBO series Euphoria which she admits she’s already watched four times. Similarly to Grand Army, Euphoria also touches on the serious issues that many of today’s teenagers are dealing with.

9. She Would Love To Do More TV Work

Prior to being cast in Grand Army, Odley had done some local theater work in the Brooklyn area, but being on TV is something she’s always dreamed of. Now that she’s gotten to experience it, she hopes to get more opportunities in the future. At some point, she may even want to do some behind the scenes work.

10. She Doesn’t Have A Big Social Media Following…Yet

Social media has become a very powerful tool for people looking to have careers in the entertainment industry. These platforms allow people to connect with others and promote big projects. Although Odley doesn’t have a big social media following yet, her time is definitely coming. As Grand Army’s popularity continues to grow, there will likely be a lot of people searching for her on social media.