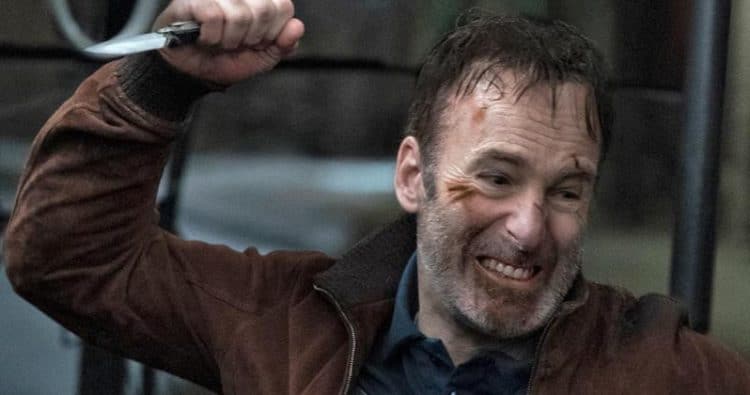 We all know enough about the movies where the former secret agent or tough guy or someone that used to work for an agency known by three letters or more settled down and lost or at least dulled-down their killer instincts, right? Bob Odenkirk is apparently playing one of those types, but in Nobody, it would appear that he’s not going to be the type of guy that will come back and be an instant badass again, which is different, and nice to hear. Apparently, his character Hutch Mansell used to be an extremely violent individual with a drinking problem but calmed down and became a family man after leaving the life. When he suffers through a home invasion and is made to feel weak though something awakens in him, but instead of going full-Rambo and decimating his enemies he ends up getting the crap kicked out of him and the collateral damage that comes from his wading back into the fray is worse than if he would have done nothing at all. That’s definitely a far cry from the vengeance-laden stories that people are used to since normally the people that walk away from violence are seen to step right back into it when pushed and become just as deadly as before. This time around it sounds as though Odenkirk’s character is going to find his return to the life more than a little challenging, perhaps giving credence to the reality that being violent isn’t just like riding a bike.

If you’re thinking this is entirely out of character for Odenkirk then you’re right since he’s been known as a dramatic and comedic actor for much of his career and has steered clear of action for the most part. But for one reason or another, he decided that he wanted to take on an action role and went on to train for the role as much as he could it sounds like. That’s a definite switch, but it’s also something that could help to create a better chance that he’ll be known for more than just the role of Saul Goodman since expanding one’s skill set is usually a good thing since it opens up new possibilities and creates a much more rounded persona that allows fans to think that an actor can do far more than they realized. For some actors it’s comedy, for some it’s drama, but when an actor that’s not known for action decides to dip their toes into the metaphorical pool it’s kind of impressive since some of them really go for broke and manage to create something that people find incredible since it feels as though it came out of nowhere. With Bob, it’s definitely bound to make a lot of people sit up and pay attention to see their beloved Saul take on an opponent in a movie with something other than words inside a tense courtroom.

Reading up on what the movie will be about though it does feel as though it might be a little torturous as well though, but not in a negative way. Instead, it might feel that his character is doing what he should be doing but just isn’t tough enough to get the job done, meaning that people will be waiting for that one moment that he’ll get to prove that he’s justified in his actions, that moment in a lot of action movies that the protagonist sucks it up and gets that one meaningful hit in that makes it clear that even if they don’t win, the bad guy is going to feel it in the morning. This movie almost gives off the feeling that Bob’s efforts aren’t going to be quite that successful since it’s very possible that his character could be so out of practice that he’s going to struggling to do much of anything. The fact that he admits that his character gets the crap kicked out of him is enough to think that it’s going to be kind of a rough movie to watch in terms of whether or not the protagonist gets to deliver a measure of justice to the antagonist. It does sound a little more realistic though since a lot of action movies feature those that are wronged coming back in such a strong way that they simply overwhelm the antagonist and call upon their own inner violence to keep them going.

To be fair there have been movies kind of like this in the past, but they’ve been largely ignored for one reason or another. With Bob Odenkirk pulling such a big switch and starring in an action movie though it’s likely that a lot of people will want to at least take a look and see how convincing he can be. It would be worth a look at least.