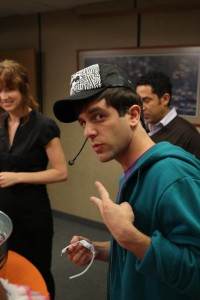 After seeing last night’s hilarious episode of The Office, I couldn’t wait to see what happened next. The Halloween-themed story did not disappoint, unless you count that I didn’t get to see Timothy Olyphant in a ridiculous costume.

However, you do get to see just about everyone else in a ridiculous costume, and they do not disappoint, particularly Michael coming as MacGruber and Gabe as Lady GaGa. The major plot of the episode (hence the title) is that everyone is trying to win the office costume contest that Pam has organized. They’re all desperate to get their hands on a coupon book that’s allegedly worth $15,000 – not realizing that, as Oscar points out, it’s only worth that much if they use every single coupon in the book.

There are two subplots in the episode, starting with a continuation of “The Sting.” Danny is now working at Dunder Mifflin, and when he invites everyone to a Halloween party at his bar, people start wondering if they have to pick sides between Danny and Jim. Jim and Pam, meanwhile, are obsessed with why Danny never called Pam back after their second date four years ago. Danny’s tenure ends abruptly; it’s not even an ending, so I wonder how the show will explain his absence next week.

Michael gets annoyed when he discovers that Stanley took an idea over his head to Gabe, and that idea was subsequently employed by their corporate office. He’s convinced (with some needling) that his authority is being undercut, and begins to freak out that everyone will go over his head or behind his back. This leads to a sit-down between Michael, Stanley and Gabe that makes absolutely no sense – and because it makes no sense, is a perfect representation of how convoluted business organizational structure can be. Anyone who’s worked in an office like Dunder Mifflin (or anyone who’s seen Office Space, for that matter) will be laughing knowingly at that one.

And who wins the costume contest? Well, that’s the best part. I don’t want to spoil, but the biggest laugh of the episode actually comes at the very, very end, when everyone reveals why they voted for the winner. I’ll just say that you don’t want to be eating or drinking during the end of the episode, because it’s a laugh out loud moment.

“Costume Contest” airs next Thursday at 9 PM ET/PT on NBC. Check back with us then, as we’ll have a recap and review of all the hilarity.