The Dunder Mifflin gang celebrates Christmas on tonight’s new episode of The Office, and Amy Ryan returns for another guest appearance. Below you’ll find a synopsis and five sneak peeks from NBC. 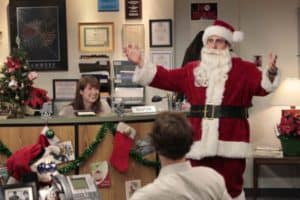 MICHAEL IS THRILLED WHEN TOBY TAKES A LEAVE OF ABSENCE

Michael could not be happier when Toby (Paul Lieberstein) has to take a leave of absence and corporate sends Holly Flax (guest star Amy Ryan) to cover for him. Pam (Jenna Fischer) is forced to do a second Christmas party after Michael (Golden Globe winner Steve Carell) wants the party to be on the day Holly returns to Scranton.