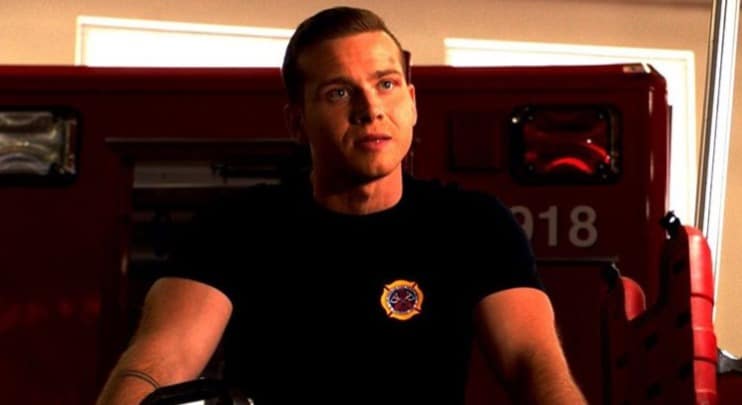 With a couple of American hits under his belt, including AMC’s ‘Into the Badlands’ and ‘9-1-1’ from FOX, Britain’s Oliver Stark has found a level of success that holds a promising future for the young actor. At the age of 28 he has already proven that this is the land of opportunity, especially since he is from overseas. It definitely doesn’t hurt that he has talent, and there are more projects on his horizon due to these facts.

But what do you know about Oliver Stark? Perhaps you’ve had the chance to see him on one of his regular programs, or maybe this is the first time you have even heard his name. Either way, there is some good information out there about this up and coming actor that you should know if you’re interested in keeping tabs on him as a fan. And we can see why anyone would want to be a fan, between his handsome good looks and his talent. Oliver really doesn’t leave much to be desired, and that is a great asset in the business he is in. Well, it’s time to buck up on your knowledge of all things ‘Oliver’.

So sit back and relax, because we have provided you with a pretty good bit of information on him, for your reading pleasure. See how much you already know, or if you are a newcomer to this man’s life, there’s no better time than the present to start your education. We’ve done the work for you, so there’s no need to worry, and you won’t have to waste any time. All you have to do is keep reading.

Oliver Leon Jones (Stark) was born June 27, 1991 in London, England; he is a Cancer. He has one older brother, and he attended Northwest London’s Hendon School during his youth. He also attended the North London Performing Arts Center. To date, the actor has not released the names of his parents or brother, though he has made posts on both Twitter and Instagram regarding them. After graduating high school he began working almost immediately, though acting did not come into his life until a later date.

Jobs that Oliver had prior to his big acting break included selling video games, cleaning, and even worked promoting night clubs. That all changed, however, when he got a role in the short film ‘Follow’, which was directed by David Alexander and put out by the United Kingdom Film Council. Since then, he has appeared in several movies and television shows, including the films 2017’s ‘MindGamers’, 2015’s ‘Hard Tide’, and an appearance in the 2011 television series ‘Casualty’, just to name a few.

While not as common as movie and television fans may think, actors have ‘trademarks’ isn’t completely unheard of. Oliver Stark is one such actor. He has a birthmark on his left eye that some have implied may damage his image in some ways. But in an interview he gave to People Magazine, Oliver said that his family took his birthmark as a sign of confidence. He also added that the mark never made him feel out of place or uncomfortable in public or in his career. This does reflect a great amount of confidence, as many people would go to lengths to cover such a mark, or even have it removed, saying, ‘I’d have a miserable life if I did’. We’d say his family is correct in their interpretation.

People Magazine also divulged that he is a step ahead when it comes to his part on ‘9-1-1’ because he is in great shape, which would be expected of a firefighter. Stark claims that he became vegan years ago strictly out of his love for animals, with no thought to the health benefits. But it didn’t take him long to learn about the benefits, and he realized that he had made a beneficial decision from the start. He sticks faithfully to his diet for moral reasons, while reaping the benefits of being in shape as an extra perk.

As we mentioned before, Oliver was given his parents surname, ‘Jones’, at birth. However, at the start of his professional acting career he chose to take the name ‘Stark’. This was obviously a decision made with a professional mindset, perhaps since ‘Jones’ is such a common surname. ‘Stark’ was the surname of his grandmother, by the way, not something he simply pulled out of a hat or an ‘Ironman’ movie.

Not only is he an actor, but Stark also has some training in athletics, and also has some skills when it comes to doing stunts. He is trained in martial arts, and also did high jump when in school. In addition, he broke his kneecap at one point while doing stunts, which resulted in him being on crutches for an extended period of time. Prior to acting, Oliver also worked as a sportswriter for an online sports site, so he is obviously intelligent as well. Nice combination.

Oliver actively supports the National Fallen Firefighters’ Foundation, which provides much needed aid for the families of fallen firefighters. He is a donor, and encourages the support of others when it comes to this very worthy cause. He became interested in the charity as a result of his work on ‘9-1-1’.

Yes, in case you were wondering. Stark has worked as a model, and we think it’s obvious by looking at him. He has himself visible on Modelmayhem.com, and has done a cover photo for Hercules Universal, as well as posing for StudioWrap, which he did an interview for as well. Those a just a couple of the gigs he has had, but modeling is not his primary career choice. It has, however, given him some good acting job leads.

For those who are interested in following Oliver on social media, you’ll be glad to know he is active. You can find him on Twitter at @oliverstarkk, on Instagram at @oliverstarkk, on Snapchat at ‘oliverstarkk’, and on Facebook at ‘Oliver Stark’. Check out some of the photos he has posted on his social media sites. He is also active in keeping fans filled in on projects he is working on.

And the question of the day, we’re sure: Does Oliver Stark married, or does he have a girlfriend? The answer is ‘No, he’s not married’. But hold onto your horses, because he does have a girlfriend. Oliver has been with girlfriend, Hannah Harlow, since 2015. She is an actress who hails from New York City. You may know her as the Sovereign Chambermaid in the film ‘Marvel’s Guardians of the Galaxy: Volume 2.’

What an interesting young man, and so confident. It’s nice to see that he works to be active in his career while maintaining a long-term relationship with his girlfriend rather than simply floating around relationship-wise. The fact that he is also skilled in so many aspects that are important to a good acting career is refreshing as well. Keep your eyes out for this sharp young man, as we believe he’ll be doing much more in the future.

10 Things You Didn’t Know About “Move and Improve”