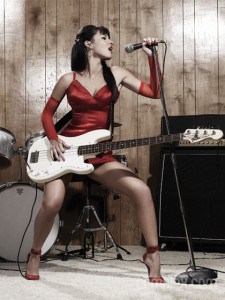 Be still my fan-boy heart! Â Our little Olivia Munn and Zooey Deschanel will be sharing the screen at last. Â The former Attack of the Show darling has had her name added to the long list of New Girl guest stars. Â Apparently New Girl must be killing it because Hollywood royalty Rob Reiner and Jamie Lee Curtis were also recentlyÂ announcedÂ to play Jess’ parents this season.

Like Lake Bell, Lizzy Caplan, and Katrina Bowden, Munn will appear as a love interest for one of Zooey Deschanel’s housemates, Nick. Â Olivia will be playing the sexy yet down to Earth Angie in a multi-episode arc. Â Newsroom fans shouldn’t worry though, all of Munn’s scenes for New Girl will be filmed over a two week period giving her plenty of time to get to the set of HBO’s hit drama.

As for when we can expect to see Olivia on New Girl, FOX has only said sometime in November. Â Live with it.