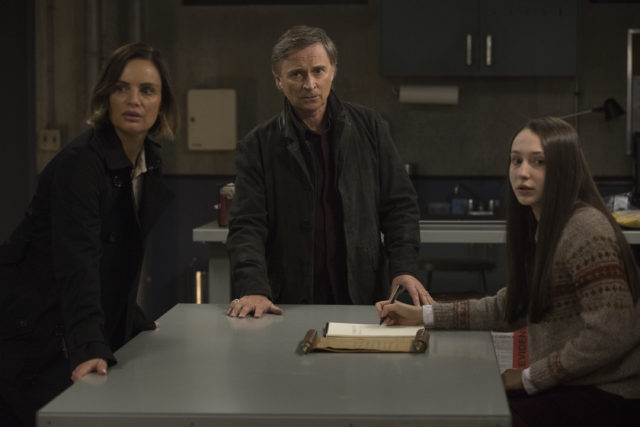 I must apologize for my lack of an episode review last week. I was traveling and was not able to complete said review in a timely manner, so I will try to combine it with my thoughts on this week’s fall finale, since it will be awhile before the show comes back on.Â Once Upon A TimeÂ finally made some big reveals about its endgame, and what happened to all of these characters prior to the curse in “The Eighth Witch”, and more than anything I’m relieved to finally have some answers.

Needless to say, the reboot has been a big ask of long-time fans. There are only a few characters that fans have known for a long time that have returned, and the new family trees have been convoluted at best. If I recall correctly, it took the previous seasons ofÂ OnceÂ several years to develop the complicated family trees. However, the past couple of episodes (“The Eighth Witch” in particular) have snowballed some of the reveals and made some of the motivating actions much more clear. The family trees are still pretty muddy, but they’re starting to make more sense.

“The Eighth Witch” not only introduced us to the motivations of Gothel/Eloise Gardener, but also returned a fan-favorite character in Zelena. This story brought us a grown-up Robin, even though Zelena hasn’t aged a day (I did appreciate thatÂ OnceÂ was more than willing to make fun of itself and recognize its convoluted timelines through Regina’s dismissal of the timelines). Though it still isn’t clear why, it’s now apparent that the angles Gothel has been working has been to unite the 8 witches in this “coven.” The problem I’m having is counting the 8 witches. I count 6 in Gothel, Drizella, Lady Tremaine/Rapunzel, Anastasia (the newest addition), Regina and Zelena. Does Tilly have powers? Perhaps Robin inherited some? It’s hard to say, but the implication is that there will be one or two more character introductions in the second half of the season. This will make Gothel’s endgame clearer too, hopefully, since it’s still not clear WHY she wants to assemble the who’s who of witchcraft.

In all fairness,Â OnceÂ has always been slow burn in terms of reveals like this. My hope was that they’d go faster because they’re trying to retain interest in their show from a general audience. The reveals have been faster and better than expected, though. “The Eighth Witch” was easily the best episode of the season in terms of exposing new developments and quickly. Granted, this has not been necessary with every episode. Exploring where Hook, Rumple and Regina have been was some of the better storytelling, and the stories fitting in-between those have sometimes been unevenly paced, or the story hasn’t been distributed as well. “The Eighth Witch” wasted no time in showing fans exactly what took place before the curse was cast in this new version of the enchanted forest, and connecting dots like why Lucy and Cinderella were still mother and daughter, who actually cast the curse, and what happened to Henry right before it was cast. Needing some extra magical firepower was a great excuse to bring Zelena back into the fold, and thus far, the story allows for Zelena to recur in the new, rebooted story. All this to say, though the storytelling has been uneven all season, it has shown flashes of greatness. “The Eighth Witch” showed some of its strongest potential yet.

Overall, though my reaction to this season has been mixed, I’ve thoroughly enjoyed the new journey they’ve taken me on. Hopefully the storytelling can tighten up and will become more clear as it goes forward, but if “The Eighth Witch” was any indication, things will improve quickly.

Once Upon A Time returns Friday, March 2nd on ABC

Once Upon A Time Season 7 Episode 10 Review: "The Eighth Witch"

More of Gothel’s plan is revealed and Zelena returns to action on the fall finale episode of Once Upon A Time.