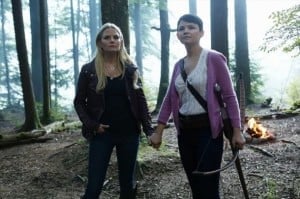 The search for a way home to Storybrooke heated up in this week’s Once Upon a Time when Aurora and Snow White both visited the burning room to get information from Henry and Mr. Gold on how to stop Cora.  In Storybrooke, David volunteered to be put under a sleeping curse in order to travel to the room and prevent Henry from being burned there.  He was able to tell Snow how to stop Cora, but he’s now trapped in the curse and needs Snow to return home to wake him up with a kiss.  Back in the fairytale world, the women are heading back to Snow and Charming’s castle to retrieve an important item, but Aurora is under Cora’s control after being kidnapped by her and then set free by Hook (who stole her heart).

In next week’s episode, it’s a race to stop Cora from arriving in Storybrooke and we’ll get an opportunity to revisit Wonderland: “Cora and Hook face off with Mary Margaret and Emma in a race to secure the compass, which will point its holder to the portal into Storybrooke. But back on the other side, Regina and Mr. Gold, desperate to keep Cora out, put a plan into action that would kill anyone entering the portal – placing Mary Margaret’s and Emma’s lives in danger as well. Meanwhile, back in the fairytale land that was, Captain Hook travels to Wonderland and meets up with a vengeful Queen of Hearts.”