Home
Once Upon a Time
Once Upon A Time Review: “The Girl in the Tower” Comes Too Late in the Season 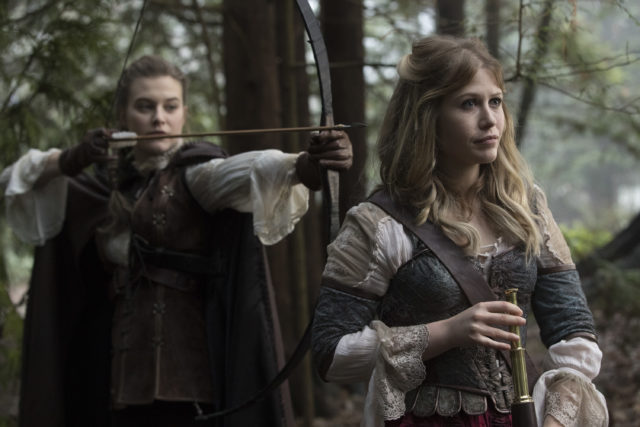 Perhaps my title is misleading. As a standalone episode ofÂ Once Upon a Time,Â “The Girl in the Tower” was a sweet story of Alice/Tilly and her life leading up to landing in Hyperion Heights. There was fantasy, romance, and love of her father, and it even connected Storybrooke to Hyperion Heights by way of Robin Hood (Junior?). Unfortunately, the placement of the episode within the season came a bit too late, because now everyone is focused on the old characters returning to the final few episodes and not giving the in-between the time of day. Maybe it’s just me, but the ratings don’t lie.

Perhaps this story, or at least Alice’s backstory should’ve been told earlier in the season. I think it would work very well as an introduction for characters like Robin and Alice, if the show’s days weren’t numbered. Unfortunately, they are, and that news casts a rather large shadow on episodes like this. If there were hope of a continued story, getting to know these knew characters would enrich and enhance the show, but since there isn’t, it feels sad and very much like wheel spinning.

I want to make one thing very clear: Alice and Robin have a compelling story here. Tiera Skovbye joining Rose Reynolds for this episode created some excellent on-screen chemistry. The story of their meet-cute was so veryÂ Once Upon A TimeÂ (with some Snow and Charming parallels) and as a new character’s backstory it was one of the best of the last few years. The days of Hercules and Aladdin pale in comparison. More than anything, the black cloud hanging over the story was not the story itself, but rather the show’s impending end. The actresses performed well and the story was fantastical, well-told, and all around excellent. I wish there was going to be more opportunity to learn about these characters in future seasons.

Regina and Lucy’s story was clearly the second fiddle. First of all, it included another character from the Princess and the Frog, which so far has been a horrible idea for this show. There have been over 100 episodes without those characters and I still don’t believe they are necessary. I do like that Regina has “outed” herself to Lucy and they’re going on Henry-style missions, which is a sweet nod to the first few seasons.

Speaking of Henry, I’m not sure why Rogers/Hook-2 enlisted his help in this week’s mission, but the story of Alice/Tilly in the real world turned out to be just as compelling as her pre-curse story. I think it would be better for the show if Hook/Henry were to wake up, even if it has dire consequences.

Overall, I really enjoyed this episode. I wish that we had learned about Robin (the 2nd) and Alice sooner, so that we could dive deeper before the show’s impending end. I would love to have explored them instead of the witch doctor, princess, or frog.

Once Upon A Time Season 7 Episode 14 Review: "The Girl in the Tower"

Rogers and Henry try to help Tilly find an alibi, while we learn the story of Alice and Robin on this week’s compelling Once Upon A Time