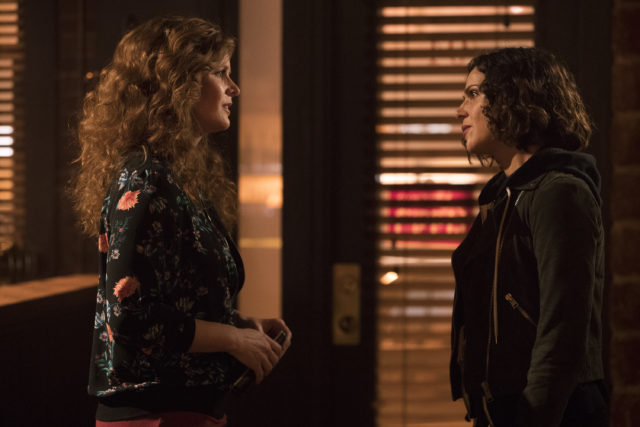 I must apologize for missing myÂ Once Upon A TimeÂ reviews for the past few weeks. I don’t get screeners and Friday nights are a busy time for my family. I’ve mostly freed myself from weekend reviews, but I felt the need to seeÂ Once Upon A TimeÂ through to the end. I will do my best to keep up between now and the series finale, because my weekend schedule has cleared up a bit. Some of theÂ OnceÂ stories have felt a little superfluous since the series finale has been announced, but “Chosen” was primarily about Zelena and facing her past, which is something that both new and oldÂ Once Upon A TimeÂ fans are interested in. It’s always a joy to have Rebecca Mader on my screen.

“Chosen” worked really well because it tied together several of the elements that have been stewing for most of the season. The true identity of Jack/Nick was recently revealed to be Hansel, who is “serial-killing” witches because of the direct impact they’ve had on his life. It seemed that his affection and admiration for Henry was genuine, which is reflected in the scenes that Henry spends tied up in J/N/H’s apartment. It adds credence to the entire story that Hansel is as sympathetic as he comes across. Any long timeÂ OnceÂ fan will tell you that Zelena is not innocent, but the story worked well to show sympathy to both characters.

Tying Nick/Jack to the witch hunting, Gothel, and Zelena all worked very well and it’s one of the better reveals that the show has done this season, but I’m having issues with the story because I still don’t care about any of the Princess and the Frog characters. At. All. Facilier doesn’t really feel like a villain, or at least one that is an imminent threat. I was pleased with this episode as a whole, but since there’s still mystery and loose ends surrounding Facilier and the other PATF characters, I’m worried I’m going to have to sit through an entire episode about it later.

My issues with some of the newer characters have lingered throughout the season, but “Chosen” was one of the season’s (or at least the back half’s) best because it centered on a more established character in Zelena. Rebecca Mader has proven through the last few years that she can carry an episode, and she certainly did so here.

Overall, I’m pleased.Â Once Upon A TimeÂ needs a few more episodes like this before it ends next month.

Once Upon a Time airs Fridays at 8/7c on ABC

Once Upon A Time Season 7 Episode 17 Review: "Chosen"