Home
30 Rock
Once Upon A Time’s Mekia Cox: What’s Next For Princess Tiana

Once Upon A Time took a leap of faith jumping forward with a new curse, and new incarnations of characters to fill out the story. Though some were skeptical at first, the show’s seventh season has kept its intrigue. That is in large part because of the well-rounded new crop of fairytale characters. Princess Tiana’s backstory was recently revealed in “Greenbacks”, the same episode which found her alter ego Sabine taking control of her future. TVOvermind got a chance to speak to Tiana’s portrayor Mekia Cox about the Once Upon A Time version of the Disney princess. We now know how the princess became the leader that she is, but Cox went further to discuss what comes next for both Tiana/Sabine, as well as what it means to her to inspire a new generation of young girls. She was also able to talk about another show she’ll be recurring on in just a few weeks, and what it was like balancing both schedules.

You’re playing a pretty important princess to a lot of little girls. How excited were you to take on the role of Tiana?

This was pretty important to me because Disney princesses have been pretty near and dear to my heart for a very long time. My very first professional job was dancing as a Kid of the Kingdom for Disney’s Magic Kingdom in Orlando, FL. And I thought I had made it. I did it when I was 7, and then again when I was 9. Then I was told I could be a Disney princess at 16. In my mind, I was excited to do that. Then I realized, ‘Wait a second, there is no Disney princess for me to play.’ Of course, that made me sad. But then in 2009, when The Princess and the Frog came out, it made me really happy to realize that some little girl out there could play that Disney character and bring that girl to life. I never thought that that would be able to be me! It’s just come full circle for me, to have such a specific dream of mine answered. I hope I do with it what needs to be done.

Because of the flashback aspect of it, you’re challenged with playing her as a princess and an everyday worker. It’s not like the animated version, where she becomes a princess. She already is one, and then it shifts because of the curse. You’re almost working backward from the movie.

Exactly! That entrepreneurial spirit she has as Sabine…is because of that leadership position she took as Tiana. [Sabine] has this need to fulfill these goals and do these things that are important to her and those around her. I think characteristically, she is the same [as Tiana], she just has different goals at this time.

We now know how she went from being a Disney princess looking for a prince, to the point where we first met her as the leader of the Resistance. What can you say about Dr. Facilier’s role in that?

Switching to her present day in Hyperion Heights. Most of the beginning of the season has been focused on Jacinda’s goals; trying to get her life together, trying to get her daughter back. Now Sabine is, once again, taking a leadership role, and steering the ship for them both.

[Greenbacks] changes the course of things for both her and Jacinda. [On Jacinda’s part in the past], there’s a lot of understanding for why Tiana is the way she is. You also start to see that Sabine has other things in mind for their lives. I think she’s always had goals and dreams…now she can move forward with some of these goals that she’s had for the both of them. 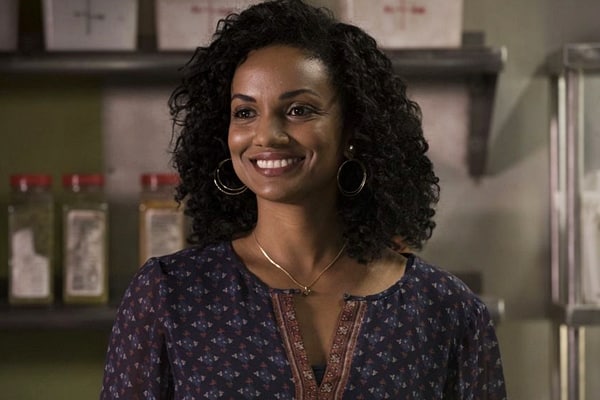 How does Tiana feel about sharing the leadership with Regina in the flashbacks?

I think you could see from episode 3 that there’s a real respect Tiana has for Regina when she finds out a little bit more about who she is and the fact that she has magic. She thinks this person is going to be an integral asset to her cause. Though she is a leader, she also is very inclusive. She wants to make sure everyone has their job, and they’re all heard. I think she happened to be the leader because she was so passionate about what she was doing. But she is so welcoming of others and their opinions, that she is able to use that for everyone’s greater good.

And that’s something unique about this leader, because not all leaders, even in the Disney/Once Upon A Time universe, feel that way.

Right, which I think is kind of nice of her. One thing I’ll say about her is that I don’t think there’s ego there. I think there’s a lack of ego, [for example] where she says, ‘That idea is better than mine, so let’s use that’. She’s able to see what is good, what works, and she’s able to pivot and turn, and figure out what new avenues need to be taken in order to get to where they need to be.

In terms of the midpoint of the season, where is Sabine heading, because I’m assuming we’re going to stick with her Hyperion Heights role, rather than Tiana?

I think you start to see a little bit more of her trying to reach her goals. She is sort of bringing Jacinda along with her, and they are both sort of going on this journey together. I can say that that entrepreneurial spirit that she has that comes from the movie, you’ll get to see more of that. Clearly we know that she’s a chef, that she wants to own her own restaurant. So you’ll get to see a little more of that.

We’ve mostly been introduced to all of the opposition against Jacinda. Do any of Sabine’s ghosts from the past appear in her present?

Not currently…I’ll say that. I really enjoy some of these new characters you were introduced to. And this isn’t the last time you will be seeing them.

You had a really strong season on Chicago Med. People were really appreciative of your character, and how the show tackled the conversation of mental illness (even though her condition was treatable). Are you still on the show?

Yes, Robyn has not left. Robyn will be back [as early as] episode 1 [of the new season]. She’ll be back, and she’s in this place where she is trying to live life with the trauma she’s had. It’s not only her trying to figure this out, but it’s Connor and her father (Dr. Charles). They’re all trying to figure how to live life now. I wasn’t ready [to let go of Robyn] either. I really love the cast, I love the script, the arc of the character.

How did you handle both shows at once?

I was very, very lucky that NBC and ABC allowed me to do both shows for awhile. I’m happy that Robyn is coming back. Production was only a week behind [the OUAT schedule]. I racked up some traveler miles! The schedule is different because we’re inside the whole time, which is lovely. When I get to Once, I have a lot of fun, but then I say ‘oh right, there’s the elements!’. We had our first full day of working on set a week ago in the rain, which was [just as] fun!

Mekia Cox can be seen Sundays on Once Upon A Time, as well as on Chicago Med, TuesdaysÂ on NBC.