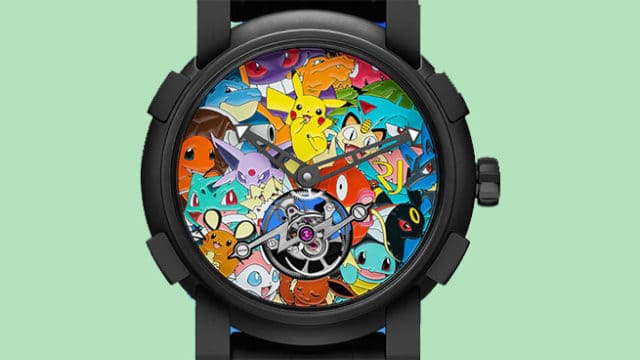 For all you watch buffs out there, you’ll know that the term “Tourbillon” is a very special term.Â  While I don’t want to get into the specifics of Tourbillon watches, for the laymen out there watches don’t get more expensive than these.Â Â  Most tourbillon watches run in the six figures so when I saw the words “Pokemon” and “Tourbillon” in the same sentence I knew this would be something interesting.Â Â  According to Comic Book:

RJ-RomainÂ JermoneÂ recently announced a new collaboration with the PokemonÂ Company to design a one of a kind “TourbillonÂ Pokemon” watch. The watch face is filled with enamel PokemonÂ with Pikachu as its centerpiece. Each piece of the watch is custom designed with PokemonÂ in mind. Not only is the bridge of the watch shaped like a lightning bolt in recognition of Pikachu, the oscillating weight that helps the watch run is shaped like the back of a Pikachu. The watch’s back is also laser engraved with images of PokemonÂ like Squirtle, Umbreon, and Lucario. The watch is protected by a strong steel case and a sapphire crystal face, so don’t expect it to break in battle anytime soon.

However, if you want to purchase a fine piece like this you better have deep pockets.Â  The watch is currently selling for a whopping $260,000.Â  RJ-RomainÂ Jermone has previously created a less expensive Pokemon watch which costs $20,000 and it’s a Pikachu styled timepiece.Â  However, if you really want to show you’re a fan you might pony up the cash and buy this one.