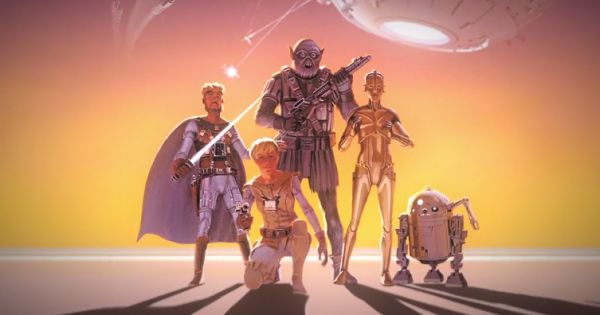 The concept art for Star Wars was much different than what we as fans finally got to see, and the students at DAVE school decided to take those concepts by artist Ralph McQuarrie and put them into an original concept trailer. As you can see things are a lot different, there are storm troopers with lightsabers, C-3PO is a lot more feminine-looking, R2-D2 has an extra appendage that just dangles free, and Chewbacca is one scary-looking individual. Oh, and of course the role of Luke was taken by a girl. You might find that funny since the correlation is now that the female lead of the new Star Wars is in fact a young woman. Ironic how things change just to eventually mirror the original idea isn’t it?

Thankfully Chewbacca got turned from a nearly hairless, big-eyed alien into something a little more easy to look at and storm troopers no longer wield lightsabers as a regular part of their arsenal. Can you imagine that? The First Order would have the Resistance all but dead at this point. Well, I suppose if you’ve seen The Last Jedi then you might already know. No, no more spoilers here, but the changes to Star Wars were undoubtedly needed since the original run-through didn’t make a lot of sense to the people that George Lucas showed it to. Lucas has been lauded as a genius for as long as Star Wars has been around but one has to keep in mind that he’s had a lot of help over the years.

His ideas are his own and that’s great, that’s what started the whole thing and without them there couldn’t be anything. Plus his vision has continued to give us one film after another, creating a universe that despite the fanboys and critics is still widely known and loved by many. Had he gone with the original and ignored the voices of those that told him it needed work however then it might have gone very differently and Star Wars might have gotten lost in the mix a long time ago. That would have been a shame since the story we love now is something that a lot of us have grown up with and can’t really say whether we would miss or not. Personally I think that no matter what we’d all feel like science fiction in film would need some sort of epic to really balance things out, as no matter how many other films have been known to create such a massive fan base few have ever come close to the numbers that Star Wars boasts, and only one franchise can dare say that they’ve got as many fans.

This is one thing that’s interesting about any story though, from the idea to the concept to the final product there tend to be a great many changes that take place when it comes to bringing the story to life. Very few stories have ever been brought to the big screen without being changed in some manner so that they might appeal to the audience.