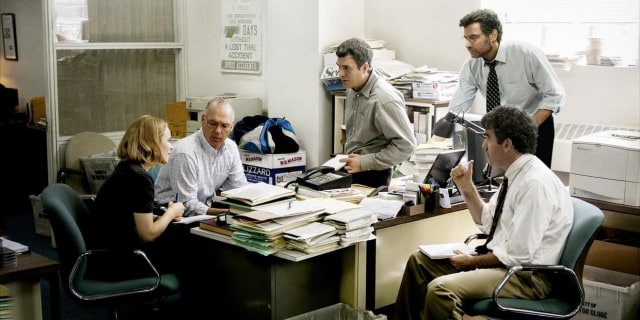 For the most part, nobody is ever going to agree completely with any year’s Best Picture nominees at the Academy Awards. No matter what you think about the films chosen, there’s simply not enough room on a ballot to fit in every film that’s more or less deserving of the title. 2015, in particular, was also an outstanding year for the motion picture industry, and dozens of different movies could easily make claim to reasons why they should have been chosen. Considering just how much there was to choose from, each nominee should feel lucky for having been chosen.

With that all said, it’s hard to find a more deserving film than Spotlight.

I’ll be up front and say that, after watching all eight nominees for Best Picture, Spotlight is my choice for winner. Do I think that it will win? It’s impossible to say. In recent memory, the only Best Picture winner that I’ve completely agreed with was Argo back at the 85th Academy Awards (others that I feel should have won are Whiplash last year and American Hustle the year before, just to name a few). Out of all of the films that I’ve believed in through the years, I think that Spotlight may be in the best position to jump ahead of the other candidates.

Let me slow down, though, and talk about the movie itself.

Spotlight is a biographical drama that follows The Boston Globe‘s Spotlight team, which is the oldest investigative reporting unit still in operation today. Throughout its history, the Spotlight team has done some incredible work, but it’s hard to put anything above the results of its investigation into allegations of child sex abuse by the clergy that earned The Boston Globe the 2003 Pulitzer Prize for Public Service. The film follows this investigation and the resulting series of stories published by the newspaper, showing the team’s entire investigation from the outset to its publication. Spotlight is directed by Tom McCarthy, and it is written by McCarthy (who wrote the film Up) and Josh Singer (who previously wrote the screenplay for The Fifth Estate). In addition to the Best Picture nomination, McCarthy has earned a Best Director nomination, and the screenplay by Singer and McCarthy is up for the Best Original Screenplay Oscar. 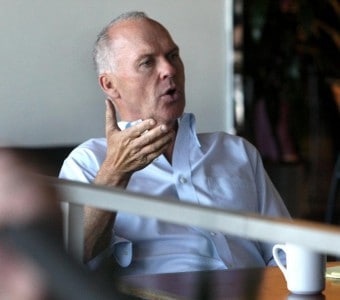 Spotlight the incredible achievement that it is, but the most important aspect is quite possibly the film’s cast. An ensemble effort through and through, there isn’t a single member of the cast who outshines another, but it’s that combined strength and equal greatness that makes the film what it is. The Spotlight staff, all based on the real-life staff of the time, is portrayed by the combined efforts of Mark Ruffalo (whose work in Spotlight has earned him a nomination for Best Supporting Actor), Michael Keaton, Rachel McAdams (a Spotlight nominee for Best Supporting Actress), John Slattery, and Brian d’Arcy James. Filling out the main cast are Liev Schreiber, who plays the new editor of The Boston Globe, and Stanley Tucci, who plays an attorney involved with the investigation. Any of the five members of the team are more than deserving of nominations, but it’s true that Ruffalo and McAdams really did shine in their roles. A lot of this could be due to the fact that those two characters (particularly Ruffalo) are given some of the meatier and more emotional material, but no material can result in success unless the acting is up-to-par. While he didn’t receive a nomination, Michael Keaton also delivers an exceptional performance, particularly in the second half of the film, that should be studied by Keaton’s peers for years to come.

Aside from its outstanding cast, Spotlight‘s greatest achievement is in its story. This is a pretty weighty and lurid story to tell, but everyone involved very obviously realized how important it was to get it right. The critical thing to remember when watching and understanding Spotlight, though, is that it isn’t a story intended to expose the Catholic Church or undermine religion. The true point of the story, and the thing that makes it resonate so well, is to show how much good journalism can do. Journalism and the media are incredibly important, despite the fact that they are used so poorly much too often. The power of Spotlight reminds me of The Newsroom (Aaron Sorkin’s most recent series on HBO) in a lot of big ways. Stories like this are critically important in reminding us of the power of real journalism and the great things that it can do for society as a whole.

Spotlight uses its incredible cast to tell a powerful story about the true purpose of journalism.