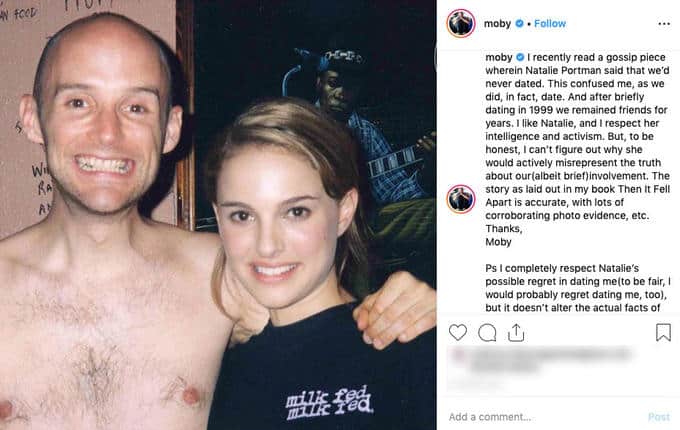 Is anyone else doing a serious face-palm at this news or is it just us? Moby alluding to ‘dating’ Natalie Portman years ago is something that most of us would roll our eyes at and just shake our heads as we went on to the next minute in our life, perhaps lamenting the handful of seconds it had taken to read the headline to this story. Even Kendall Trammel of CNN seems less than impressed when it comes to the story since quite honestly there’s not that much to it that couldn’t be explained using the same rules of dating we all learned in high school. Basically, if you’re not hooked up, not calling each other your ‘boo’ or ‘bae’ or whatever other pet names that people tend to have for each other, and if you look like, as this picture shows, you’d rather be anywhere else at that moment when someone takes your picture, there’s really not much of a relationship going on.

Right now the big thing that seems as though it’s being talked about by everyone, including Matt McNulty of People, is that Moby is actually apologizing to Portman regarding what he said in his book about their ‘relationship’. Apparently this period in which they were hooked up came as something of a surprise to Portman, who was 18 at the time and regarded Moby as a creepy older man that acted kind of odd around her. Somehow Moby took that to mean that they were an item despite the age difference between them. Even more confusing is that while they were ‘dating’ Moby thought for the few weeks this lasted that he wasn’t good enough for her since he was emotionally disturbed and kind of a wreck. Imagine then Portman’s further confusion when it was announced that she’d told Moby that she had found someone else and had then moved on. Someone needs to remind Moby that just calling someone their girlfriend doesn’t necessarily mean that a relationship is not a two-way street. It’s kind of important for the woman or the significant other to be aware of the affections of the first person so that they can either reciprocate or deny them in their own time. The fact that all of this came as news to Portman is a good indication that Moby was playing his own version of La La Land in his head at the time and possibly didn’t check back into reality until just recently.

In that regard it would seem his apology to Portman might be even more confusing since she had no idea just what was going on back then, except for the fact that the singer was acting in a manner that she couldn’t fully understand but definitely couldn’t hang with. Ever have anyone act as though they were a part of your life when they weren’t, despite what might have been going on in their head? If you answered yes then you might know what Portman is going through with this matter. This kind of brings to mind other claims he made during that time that are detailed by Peter Helman of Stereo Gum. Moby has stated that he got frisky with Christina Ricci and even had a brief relationship with Lana Del Ray before she was famous. You’ve got to wonder just how real these other instances are now that he’s been called out on his supposedly make-believe relationship with Portman. In fact Moby has even gone so far as to state that she might feel some regret about their time together, as he was pretty messed up and didn’t want her to know about it. Â At this point everything seems to be building up and up and while he says he has photographic evidence and stories to corroborate what he wrote in his book it’s still a mystery to Portman.

It’s easy to have regrets and not want to admit to them, but being as Moby actually had her age pegged wrong when he made the claim of when they got together it does seem as though he might have allowed his mind to slip off the track as the music kept playing and might be remembering things a little differently than they happened. In this day and age when so many people believe women before men it’s easy to see how Portman would be able to slip by if she did in fact date Moby back in the day and was kind of regretful, but the manner in which she’s denied this ever happening and the fact that it’s easy to believe her words when she describes it in detail makes one believe that Moby was caught trying to rewrite his own history to make his life sound just a tad more interesting. But on top of that the general feeling that a lot of people have is simple enough. That feeling of course is: who cares?

*Does anyone even care about Moby’s recent apology? It’s very hard to at this point.