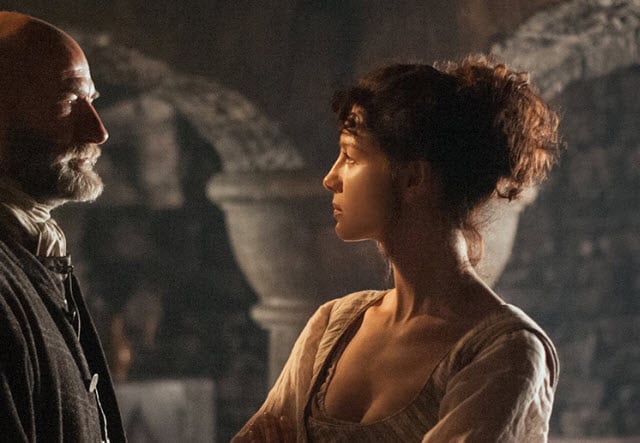 As most of you probably know, Outlander was based the Outlander series of books by author Diana Gabaldon. They deal with a time-travelling nurse named Clarie Randall, who while on honeymoon with her husband Frank, is ripped backwards into 18th century Scotland.

That’s a paraphrase of Wikipedia, by the way; I’ve never heard of these books, nor the author. From what I can gather, the books are well-written, engaging, and entertaining. Having not read them myself, I can only use the television show as an indicator of their quality.

So, let me get this out of the way: I am very, very impressed with this show. The plot is interesting, the characters are complex, and the setting is unfamiliar, which is always something I love encountering. But even if you have read the books and hated them, I implore you to watch this show. The visuals are unlike anything I’ve ever seen.

There’s a moment when a group of druids spin around with flowers filled with light. They’re performing a ritualistic dance around a group of stones. It seems kind of ridiculous, at first read and viewing; in fact, the narration of Claire (I’ll get to that) even voices that opinion. But there’s a shot where they pull away and all you can see is these bright, glowing flowers and then the druids begin to spin and the lights crisscross the screen. It’s a brief shot, less than ten seconds, but I was mesmerized. If nothing else, watch the pilot for that moment.

The story opens with the voice of our protagonist, narrating over a moment she had before she travelled back in time. She is looking at a vase, wondering if she should’ve bought it. She’d spent the last five years working as a nurse in World War II, and spent much of it covered in the blood and fluids of dying and maimed men. Claire looks at this vase and wonders if she should buy it and settle down. She already has the husband, in Frank Randall, but they just reconnected after spending the war working in different departments. Claire says, despite all that was to follow, she wouldn’t change a thing.

Let me pause for a second. Part of what I think makes a story, for lack of a better term, good is the little moments in between. There’s plenty of stories with fantastic plots and tight corners; there’s also just as many stories with static characters and developmental skeletons. Nobody remembers the plot in shows like Mad Men; they remember Sally telling her father that she loves him. Even in a show like Breaking Bad, which was so perfectly plotted, its the moment in which Gus comes out of the blown-up rest home bedroom. There’s a brief, millisecond pause in which your stomach turns with delight and fear; he’s alive! Long live Gus! But then he turns and half of his face has been torn away, and he adjusts his tie before he can die.

And that’s what I appreciate most about this scene. There is plenty of plot to come, but Claire’s most vivid memory is this stupid damnable blue vase that stood between her and the life she wanted. A truly good piece of writing.

There’s so much good here: Frank and Claire go explore an old castle in which Frank’s ancestor John Randle might’ve frequented. While they explore the basement of the place, Frank goes down on Claire, and it’s a really steamy scene. I’m not bringing this up to be titillating: I cannot explain how important this scene is from both a political and artistic standpoint. Female pleasure has been designated (by places like the MPAA) as an automatic NC-17 rating, and yet here we are on the small screen watching this woman in the 1940’s enjoy herself. It’s from her perspective, totally; she guides Frank, and we watch her reaction. It’s all about her.

I’m being a bit lavish in my praise but I thoroughly enjoyed this episode. It wasn’t perfect, by any means; the narration was more than a little obnoxious in places and they tried so hard to make Frank and Claire’s lives seem perfect that it dampened the suspense of what came next. I mean, Jesus, how much foreshadowing do you need?! It felt like a horror movies in some spots: nice old lady who sees something bad in the tea leaves, old innkeeper lady who talks about mischievous spirits, the narration from Claire about the druid ritual being something she shouldn’t see, that it was too “powerful and ancient.” Just tone it down a little, M. Night Shyamalan; we know what’s coming.

I think this episode is about fifteen years ahead of the first in terms of quality and story-telling. I really do. From the pilot (which was excellent) to this is a huge leap. It took everything that I loved about the first episode and built the episode on it, and it took the parts I didn’t like and made them better. That is a very rare and difficult feat.

Let me get give you an example: As I said, the exposition needed to set the story in place also drug it down. Too much foreshadowing weighed on the proceedings like an anchor; there was no other path for the story to take but the one that was right in front of it. Thankfully, its a good story, but it still needed to find a way to dump information but also make it worthwhile to hear.

Claire goes out to speak with Jamie, who is working in the stables. She brings him lunch and fresh bandages, and they sit inside while the rain comes down around them. Jamie then proceeds to dump copious amounts of backstory, detailing his life up to that point. It’s really well done, and you don’t even notice you’re being filled in on things. It’s hard to do that and still make entertaining television. Oftentimes, it’s awful and you roll your eyes and you suffer through it; but Outlander did good work here.

It also keeps many of the feminist themes that I loved so much about the first episode. Colum MacKenzie calls Claire into his study. Throughout the episode he makes repeated attempts to get her to slip up and make a mistake in order to suss out whether she is a spy. This is the first of such attempts, and it doesn’t go well for him. She explains that she was attacked by Jack Randall and nearly raped, and MacKenzie asks why Randall would rape her for “no good reason.” Claire, who is clearly angered by this, asks MacKenzie if there “ever is a good reason to rape.” Really good stuff. A bit on the nose, but really, really good nonetheless.

This episode had its share of great little moments as well. Claire, after her uncomfortable discussion with Colum, goes out on a wall that overlooks the courtyard. In it, Dougal MacKenzie (the leader of the Highlanders who rescued her and the brother of Colum) is playing with a bunch of little boys. One of them he picks up and swings around in the air. But when he puts him down, there’s a shot of Dougal, and a flash of something across his face: he’s in pain. Obviously, whoever this kid is, it isn’t his (it’s his brothers son). Dougal looks at Hamish (the kid) with longing and his faces works to keep tears back. Then the camera moves on. Really great piece of writing, even better piece of acting; many actors would’ve played that up and ruined the moment but Graham McTavish nails it.

But we cannot forget about the actual plot of the show, which this week deals with Claire trying to get back to Inverness. Colum offers her transportation five days from when she arrived, and she accepts. Unfortunately, both Dougal and Colum suspect her as a spy, and when her ride arrives, she isn’t allowed to leave. Dougal takes her to the basement of the castle, which is the same room that Claire and Frank went into in the pilot. The scene is intercut with Frank and Claire’s exploration of the room as Claire explores it now. Colum, who is in the basement, tells her that it was once the healer’s “surgery”, as he called it, and he wants her to remain on-grounds in the healer position. Claire is furious, but cannot do anything; both Colum and Dougal distrust her, so she has to stay. They lock her in the surgery, and the episode ends.

If I was to give this a grade, I’ve give an A. Truly good television. My only nitpick is that they didn’t smash-cut the ending, and instead went to a dissolve. It’s as stupid as a complaint as it sounds.

I hope you guys are enjoying the show as much as I am.