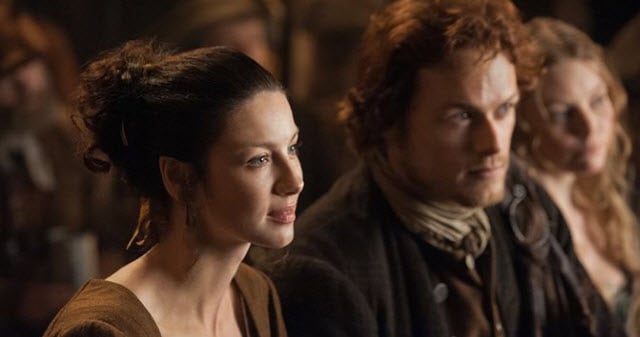 Three episodes of Outlander in and I am entranced. This third episode is definitely the weakest of the three, but that’s only relative to the high quality of the first two. Usually when I do review, I take copious notes. I have a medium-sized notebook that I write in, and I usually take up three or four pages front-to-back. But for the show I often do only a page in the back of the page, because I am enthralled by what’s going on the screen. The beauty of the scenery, the easy charisma of the actors, and some very strong writing really just capture my attention more so than any other show that I’m watching currently.

But it’s not a perfect show. This episode highlighted many things that I dislike, or at the very least I’m not a fan of on the show. The writing can veer into what I can only describe as novelistic; it can get very on the nose, which doesn’t come across as so jarring on the page as it does on the screen when you see people actually acting out against a backdrop. And the direction is a little bizarre at some points; I’m not a fan of the scene transitions nor the little time jumps. It feels like sometimes it can get ahead of itself in terms of the fantasy genre and it gets maybe a little too experimental; less about breaking the rules to try something new and more about breaking the rules to be different.

Now, I am not an accomplished director, or even an unaccomplished one; but I feel like the show would maybe benefit for a little less weirdness and a little more conventional ism, at least when it comes to the directing, because the choices made can really pull you out of the story. And maybe the writing could benefit from a little less novelistic approach; perhaps not be so faithful to the dialogue of the source material. I’m not saying they are, because I’m not familiar with the novels the show is based on, but the dialogue can sound like it’s straight from the page.

This episode is about Claire trying to both find a way out and still adhering to I guess what you call her moral code. She is a nurse/doctor by trade and she can’t help but help other people. She narrates that she does it because she’s trying to secure her release; when she massages Colum’s spine and when she helps the Baxter boy, but it’s not quite that simple. Most great doctors (at least tv ones) can’t help but help other people, oftentimes either because they have a God Complex that forces them to attempt to control their surroundings, or they need to help others to assuage their own pain. It’s a spectrum, not an either/or, but I do believe Claire falls closer to the second category than the first.

Request as a doctor or a healer for the McKinsey family, brings her afoul of a very dark, very psychotic priest named Bain. He’s the epitome of Old Testament justice; he believes that all women should be beaten in order to reduce temptation and that harsh punishment is the only punishment. His introduction is him perform in exorcism on the Baxter boy, and in the next time we see him he is taking a 12-year-old boy and attempting to convince the town judge to cut off his hand for stealing bread. Thankfully, Gellis Duncan reduces the punishment to an ear-nailing, which is exactly as awful as it sounds. Basically, he is the worst. And he has more power than he should. Being that he is the town priest, his word, as they say, goes. For the most part.

The point I’m trying to make is that even though Claire knows this man has power over basically everyone, she still risks her own safety and future safety to save the boys life. If she truly
was only interested in escape, she never would’ve put her self in a situation where she would be noticed.

All of this I enjoyed. The one scene that I thought was most necessary and perhaps a little poorly handled was at the and when she’s listening to a bard at the castle. The bard sings about a woman tossed into a strange land, describing what happened to Claire almost perfectly, and then tells of how the woman returned back to her own time. As you can imagine, this is a little on the nose. I am sure that this play much better on the page, but I don’t think the TV show has a time to really tease it out as much as they would like. Like I said I think the scene was necessary but perhaps it could’ve been handled a little bit better? I don’t know. But Claire knows she can get back to her own time, that it is a real possibility, so she has to get back to the stones or, as she says, die trying. And as poorly as things are going for her politically, she should’ve leave sooner rather than later.

If I do get as upset a grade, I will probably give it a B-. At best, a B. Hopefully next week isn’t as clunky with the exposition, and we can get back to the show as it was in the second episode.