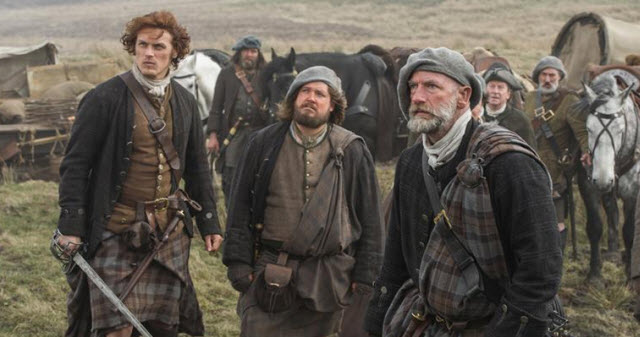 Outlander’s strengths revolve around the cast of characters that interact with Claire. Though the plot is engaging, it’s purpose is to further the development of the people that are involved in it. The plot of a show such as this is to push and prod and reveal things about the characters. There is no exposition character, or other types of character stereotypes; they all have a reason for existing.

That is, obviously, very difficult. To juggle a cast of characters as large as this (and adding tiny side characters every week) requires a lot of thorough planning and foresight. The interactions between Ned Gowan, the lawyer for the Mackenzies and Claire are indicative of this. Not only do these characters have separate, real lives, they also do not conform to expectations.

Ned Gowan is an obviously educated man. He is not a warrior, or a killer; he practices law and has asthma and a really foppish ponytail. Claire finds a friend in him. She helps him with his asthma and even openly discusses with him her knowledge of their manipulations of the townsfolk they are collecting extra money from. She feels as though she can trust him, that she can treat him as a friend.

But as an advanced a woman as she is, she cannot possibly know this man. Two hundred years in the past, living under the oppressive thumb of the British Empire; Ned Gowan has seen things that Claire can’t understand. The life of (relative to two centuries) of luxury that she lived in the UK is so much different. There, she has medicine, and ready access to clean clothing and good food. There, she has much less worry of physical and sexual assault. But here? It’s different; every person has a tragic history.

And she misreads him badly. When she learns that Dougal is getting this extra money so that he can form an Jacobite army to retake the throne, she tries to warn Ned of the future: no Catholic king ever sat on the throne again. But Ned, foppish and weak, snarls: “History be damned.”

After that, Ned wants nothing to do with her. He loses his trust in her. He has spent the last bit of his life getting ready for a fight and he will not be told by a Sassenach that it’s hopeless, because she doesn’t know. Her presence in that timeline proves that history is not, as they say, written in stone. After all, it’s not history when you’re living it.

The Ned/Jacobite Army storyline was near-perfect; so many great moments. I am very high on this show. One of the only complaints I have had (in my mind, at least) is about Jamie. His goody two-shoe routine wasn’t flat as it was out-of-place with everyone else. He likes Claire, obviously, but he isn’t being nice to her and protecting her because of that. It is apparent he believes it’s the right thing to do.

And it’s hard to believe. A world full of rough men and she finds the one who isn’t? But there’s a moment in which Claire steps out, attacking Angus (whose just a generally unpleasant guy), and Jamie has to step in before he guts her. But when she walks away, he walks over and tells her to slow her roll. He admonishes her to stay out of things he doesn’t understand. And that makes me feel better about his character; one moment where it’s shown he has something else to give, feels something else, besides when his relationship with Claire, really went a long way.

At the end of this episode, Dougal confronts her about her opinions. She tells him she’s not a spy but it doesn’t matter, really. She’s sowing doubt with her attitude and Dougal wants her to stop. As they discuss this, a group of redcoats comes up; one of the men worked in a Mackenzie-owned village. He defended her honor before and he’s here to do it again. He asks if she’s being held against her will, and the episode ends without her answering.

If she goes with the redcoats, is she really better off? Jamie will protect her while she’s there, and getting back to the stones won’t be any easier with the British empire breathing down her neck. It’s not a great situation for her to be in; let’s just hope she makes the right choice.