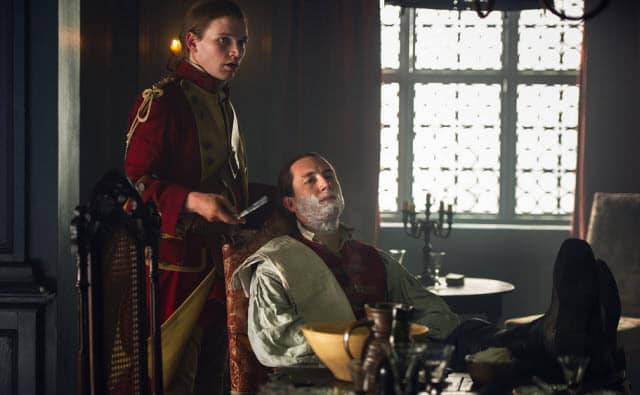 Outlander is so good. So, so, so good.

It’s easily the best show of the summer and its one of the only new shows to come out that I’ve come to love. And I never would’ve expected to like it!

I took this assignment on a whim; someone needed to review it so I volunteered. I’d only heard of the book series a few days earlier when I was perusing the stacks with a friend, who pointed out the series to me. I remember my first thought, looking at these massive tomes: who in the hell has this much to say about anything?

Diana Gabaldon, that’s who. And thank god that she did. As good as this show is, as fully formed as this world is, it could only come from a book series that has strong development. Makes me wish Harry Potter would get made as a television series…

This episode, the sixth of eight, is one of my favorites. Once again, the show just nails character moments. We learn so much every episode about these characters; new things, enlightening things, horrifying secrets. And they’re revealed in such interesting ways!

Lets start with the best, and most important, sequence of this episode. Claire has been taken to a British-controlled, Mackenzie-owned town. She convinces the garrison commander to let her go back to Inverness. But then Jon ‘Black Jack’ Randall comes along and goades Claire into revealing her sympathy for the Scots (little weak on the reasoning, but it fits Claire’s character, so it’s a nitpick). When the garrison commander is called away to combat, Randall is in charge.

But he’s not the Randall of the pilot; he apologizes for his rape attempt against her. He wants to show her that he’s a gentleman. He offers honesty between the two; tell him the truth, and he’ll tell her the truth. But, of course, Claire cannot. How do you tell a Captain of the British Empire that you’ve “fallen through time” and “Im boinking your ancestor”? It’s not exactly practical. So she lies. She tells him that she fell in love with a soldier who was stationed in Inverness and followed him there and long story short he tried to rape her and she escaped.

Randall seems to believe her. He draws a picture of her (he’s actually a good artist, a cool little character tidbit), but it’s only to mess with her; he calls it “Beautiful Lies”.

Randall hasn’t bought a word she says. But he seems alright, still; they’ve been in this room for, like, twenty whole minutes and he hasn’t tried to rape her. PROGRESS!

He and Claire come across the subject of him whipping young Jamie. He then details, with excruciating detail (and a bloody, skin-tearing flashback), his actions. It’s really, really hard to watch: Jamie’s already been flogged 100 times, but didn’t cry out, so Randall decides to give him another flogging. Randall beats him till HE’S exhausted, slipping and sliding around on the blood dripping from Jamie’s savaged back. Randall stumbles around on the slick wooden floor, blinking back the sweat. He beats him with a cat-o-ninetails over and over and over and over again. Jamie eventually passes out.

Randall tells all of this with a tinge of regret, of pain; he regrets his actions. He tells Claire that he hates himself for the monster he’s become. Claire tells him that he can be redeemed. It all seems like standard stuff. He even offers to take Claire to Inverness immediately.

And then, he takes her hand, and when she stands, he punches her in the stomach. He has corporal, a young man, kick her repeatedly. He has been feeding her this line of redemption and regret to set her up: she is now emotionally and physically devastated. He’s turned her whole world upside down. All the hope that grew within her has been ripped away, and she is an open wound.

It’s such an incredible sequence. We learn so much about Black Jack Randall. He’s a genius an interrogation, who knows exactly how to break someone. He’s a psychopath. He’s a soldier. Jon Randall has all of Frank Randalls charm and intellect and power; but he fancies himself a god. He’s really, really, REALLY dangerous.

Dougal rescues her, thankfully. He manages to get her out of the building without bloodshed, but he has to take her to an English prison for further interrogation in the morning. Unless she becomes a Scottish citizen. So, she marries Jamie. Who’s a virgin.

But seriously: another thing about Jamie that sets him apart from the rest. He’s definitely not like his peers and there is a bit of loneliness and distance in him. We learn, also, that Dougal is not an idiot, or even unkind: now that he believes Claire is a friend, he makes sure to protect her.

It’s just a really good show. Not a perfect show, because there are still bad tv tropes that pop up every now and again but I think it’s really doing something special. Not only with television in general, but in the feminist politics that it espouses. Outlander is a unique show, and if it keeps its current trajectory, it has a chance of being a historically great one.