Home
Outlander
Outlander Review: Claire Says Goodbye To One Love, and A Long-Awaited Hello to Another 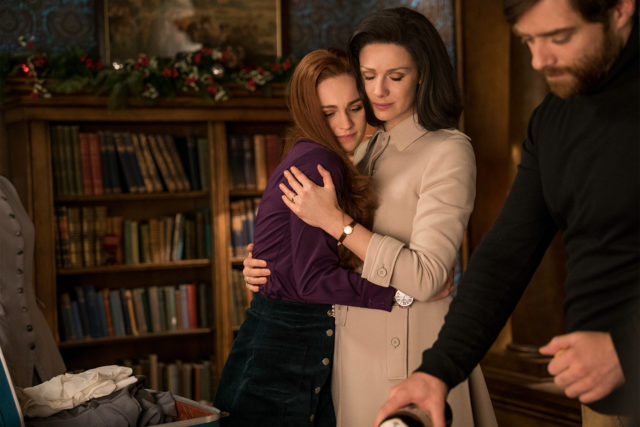 The only conceivable reaction to the final two minutes of this week’s Outlander was collective held breath. The reunion 200 years in the making has finally arrived, as “Freedom and Whiskey” saw 20th century doctor Claire Randall Fraser finally find her husband Jamie Fraser in the 18th century. Before we get to Jamie and Claire’s ‘reunion of the centuries’, we have to talk about how the reunion came to be, and why it wasn’t an easy decision for Claire to choose to go after Jamie this time around. Luckily, there was someone there to give her the final push. Little does he know how important his place will be in the Fraser family.

The main reason that Claire found it difficult to even entertain the idea of looking for Jamie in the first place was because it was so painful to let him go. Discovering that he was alive opened up a window of hope. As painful as it was to shut that window, you could tell that a part of Claire was alright with that because she didn’t have to face a bigger fear: letting Brianna go. Brianna became the great love in her life after Jamie. She saved Claire from having a closed, cold heart. But it took the truth about Jamie to bring Brianna and Claire closer together, even if they still butt heads. On that point, Brianna is definitely her father’s daughter. How can she not be changed by what she learned? To be the daughter of a man she doesn’t know, born out of impossible circumstances? It’s no wonder that Brianna decides to drop out of school. She is no good to her education when she is distracted and confused.

That’s a decision that comes from her age. Both Claire and Jamie were taught to stay hyper-focused in times of crisis, which is why Claire is so upset with Brianna when Roger shows up. Bless his heart, not only does the man come on a mission of mercy, he saves the day just by walking into the room and stopping an argument. After months of searching, Roger does indeed find Jamie, who is living his life as a printer in 1765. Jamie may not have intentionally given Claire clues to his whereabouts, but it was clever nonetheless to publish words from the most famous Scottish poet in history-who was only 6 years old at the time. Roger becomes our hero in this moment, and in the ones to come.

Not only does he find Jamie, he gives Claire and Brianna the strength and reassurance that seeking him out is the right thing to do. Mother and daughter would not be able to let each other go if they didn’t know that Roger would be staying behind with Brianna. He is their confidante, their guide, and he knows what they both need in order to say goodbye. Much of that involves time alone, and some much needed closure on some really difficult topics, as well as where Brianna’s life will go from here. We also get a wonderful goodbye between Claire and her good friend Joe, who I think we should have seen more of, especially as he is the one to discover Geillis’s bones in the Caribbean (stay tuned). Claire and Brianna get peace, Roger has his first American Christmas, and Jamie gets the surprise of his life. We held our breath in that moment, and so did he, which is why he fainted. Watching a tall Scottish warrior fall to the ground in shock is simultaneously worrying and hilarious, even if we are also laughing partially from the shock of the moment.

Claire and Jamie are together at last. Tune in next week for the extended reunion, which promises to rival those events of “The Wedding”.

Roger helps Claire and Brianna say goodbye so that Outlander fans may get the reunion they’ve been waiting for.