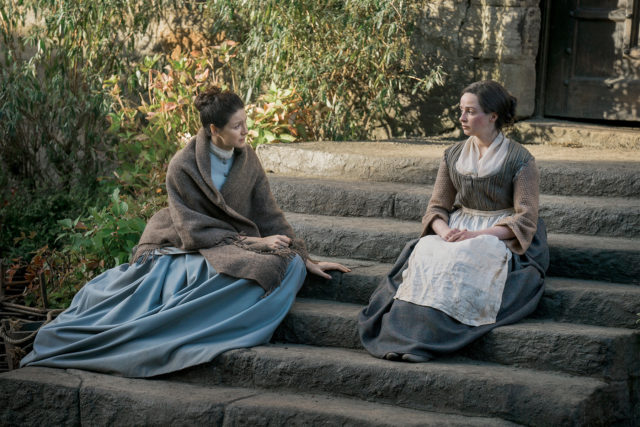 If you thought that Outlander would stabilize with Jamie and Claire in the same century and on the same continent, you’ll be disappointed. No love is more true than Jamie and Claire’s, but life has never been easy for them. Why should that change just because a few decades have passed? Claire’s return to Jamie has been chalk full of complications, much more than either one of them could have expected. There is one particular, major complication between Jamie and Claire. This is the episode that Claire finds out she is the “First Wife”.

In the chaos of trying to get out of Edinborough, there was no time to tell Claire what to expect when she returned. Claire had warm welcomes from Fergus, Young Ian, and grown Ian. However, she does not get the same reception from Jenny. Besides Jamie, Jenny and Ian were the closest confidantes Claire had in this time period. With a little time, and a little trust, they became family. Jenny isn’t as forgiving of Claire because she had a front row seat to Jamie’s heartbreak, and can’t reconcile the Claire she knew with the one who left him for twenty years. It’s not as if Claire can tell her the truth, or even tell her about Brianna. That will just open up a whole other can of worms. Jamie and Claire have always been more comfortable with secrets, because secrets have kept them alive half of the time. Jenny hasn’t lived that way, particularly not within her own family.

Jamie still has secrets. The easiest one to explain is how he got out of Ardsmuir prison all those years ago. We finally see how he discovered jewels under the Mackenzie crest on Silky Island. He knew finding Claire there on the word of a delirious, dying man was a long shot. Perhaps going there was his first step to getting back to Claire anyways, since it is how Jamie got out of prison, and was therefore able to survive long enough for Claire to find him. However, so much more has happened than just Jamie surviving. Claire could accept that Jamie had another son, especially since Jamie wasn’t in love with his mother. What she cannot accept is another wife, especially a woman who once tried to kill her.

Yes, Jamie did indeed marry Laoghaire. Remember her? She was a young girl with a sweet face and a dangerous obsession with Jamie. She was also so outraged that Jamie married Claire that she was responsible for Claire almost burning at the stake. She’s been through a lot in two decades herself, but she is still the same insecure girl we met all those years ago. I’ll say this. Jamie does a good job of explaining the situation to Laoghaire’s daughter, much better than he does with Claire. Children accept things easier than adults do. Laoghaire’s children are the reason he married her. There was a hole that needed filling, and Jamie filled it. Not for one second was he in love with her. Still, Claire would have a much easier time forgiving Jamie his lie if he had married anyone else.

Laoghaire is as obsessive as ever. Once she got her hooks into Jamie, nothing and no one would convince her to let him go. Given her nature, it’s not surprising that Laoghire would come after Claire. She’s just a terrible shot. Jamie would have died from the gunshot or the fever if Claire wasn’t such a good doctor. After that, Jenny is much more inclined to be forgiving of Wife #1. In a contest between the wife who shoots her husband, and the one who saves his life, you swallow your pride. Claire and Jenny’s relationship probably won’t ever heal completely, but it gets far enough of the way there. After several conversations, Claire realizes that no amount of time in a safe, stable life compares to being with Jamie.

Ned Gowan, who thank goodness is still alive, explains the legalities of Jamie’s situation. Despite his marriage to Laoghaire being invalid, the woman still wants restitution for her suffering. This is where the Silky Island treasure comes in handy. Or at least it would, if Jamie had been able to make the swim himself instead of Young Ian. That young man is itching to be treated as an adult, but he doesn’t yet understand the dangers of being a full-grown man. It means being 100% responsible for your own well-being. Jamie has been trying to teach Ian how to be a man, without properly teaching him how to defend himself. Those types of skills would have come in handy when Ian was captured by a strange ship.

Though Jamie and Claire do not know it yet, this a major turning point for them. In order to rescue Young Ian, they will have to say goodbye to Scotland for a very long time. When, or if, they return is a matter of survival.

Claire’s return to Lallybroch sets off a chain of events that will carry Outlander over to the New World.