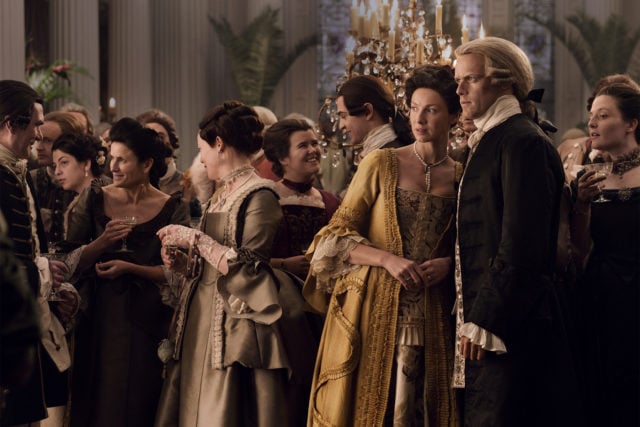 Aside from Jamie and Claire’s reunion, there is one other moment Outlander fans have been waiting to see this season. Claire has had many reunions with many people since returning to the 18th century, but this may be the most pivotal one. Shockingly enough, Jamie sees an important ghost from his past as well. If you have not watched the latest Outlander, turn back now, because we’re about to reveal the major characters who made their grand returns.

The story picks up from Young Ian’s perspective as he is dumped in a pit in Jamaica. The only thing he knows is that he is to be taken to “The Bakra”. His question of ‘what’ instead of ‘who’ the Bakra is can be taken as the correction pronoun. While the Bakra is a who, indeed a she, the woman has taken many forms and many identities across two different centuries. Only Geillis Duncan would return to Outlander dripping from a tub of blood.

She’s just as obsessive as ever, fervently dedicated to the cause of seeing a Scottish king on the throne. Knowing what she knows of history, and having failed the first time she tried to change it, Geillis is making a second go of it. She’s aided by another pair of familiar faces, the Campbells, who we first met in “Creme de Menthe”. Geillis believes that 3 sapphire stones from the treasure chest will give her the answers she desires, but she only has 2. We also learn that the treasure was actually Dougal’s, and that Geillis still believes he died on the battlefield.

Not too far from Geillis and Young Ian, Claire, Jamie, Fergus, and Marsali make port. Claire is immediately thrust into the heart of the slave trade, heartbroken and disgusted by what she sees. After all, her best friend and confidante of 15 years was a successful black doctor. Even if that wasn’t the case, Claire would still be horrified at the sight of all of those African slaves locked in cages. When one is put on display and handled in the most obscene way, Claire fights back. What she ends up with is a slave of her own named Temeraine. As terrible as it is, he is better off with the Frasers for the time being. With them, Temeraine will not be abused, and will eventually be set free. Knowing Claire so well, Jamie asks her when the slave trade ends. Her answer is a bleak and shameful reminder to us all.

With Temeraine and Yi Tien Cho at their side, the Frasers attend the Governor’s ball in search of Young Ian. Everything from the recycling of costumes, to the very air in the room, is intoxicating. Almost everything about the environment reminds them of Versailles. This is evident in the gaze Jamie and Claire share remembering the (not forgotten) passion of their early years together. In spite of the slavery, there is something in the air that makes the connections particularly electric. Fergus and Marsali are in their honeymoon phase, and Yi Tien Cho makes a remarkable connection with one Margaret Campbell. You want to talk about ghosts from the past? Who should be the esteemed Governor of Jamaica than Lord John Grey himself! If ever there was a time Jamie would need his friendship (again), this would be it. That unspoken connection between them is still very palpable, as electric as one can have without having been intimate with that person. John is as gracious as ever, and still in love with Jamie, given that he has kept the sapphire Jamie gave him. This is the same sapphire Geillis is looking for.

Yes, Geillis is at this party too. Her reunion with Claire is layered with as much kinship and deceit as it always was. Geillis always did have a thing about killing her husbands and joking about it afterwards. Any pretense of friendship ends once Geillis finds that sapphire, and uses Margaret Campbell to interpret the prophecy of a new Scottish king. Just as troubling as the prophecy itself is the party’s tardy guest-the captain who ends up arresting Jamie. The only good news to be found is that Temeraine is set free. Everything else is terrifying, because there are elements at play here that no one can control.

The ghosts of Outlander’s past meet the Frasers in Jamaica as they continue their search for Young Ian.